Been away for a few days so a bit behind with my blog pots.

Jack, Bob and I met for a long awaited game using Jack's 20mm Americans and Mexicans.  Jack couldn't quite remember where all the figures were and even afer a bit of searching we still couldn't locate all the Americans but decided that we would supplement their numbers with some Mexican allies.

Bob laid the table out at his place and I picked up Jack from the local tube station.

We used the basic Black Powder rules.  No actual battle, just a game.  The scenario basically was an assault by the combined Mexican and American forces on a village with the object of capturing the rebel Mexicans 'Grande Fromage' (Big Cheese) or leader if you prefer.  Bob very kindly pointed him out. 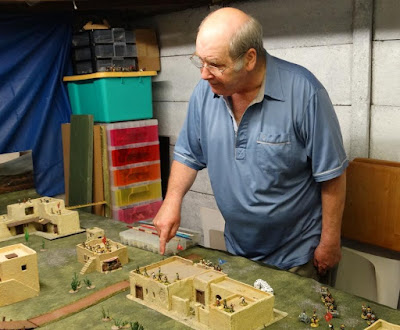 Jack commanded the Mexican allied foot and horse whilst I took on control of the American Forces. 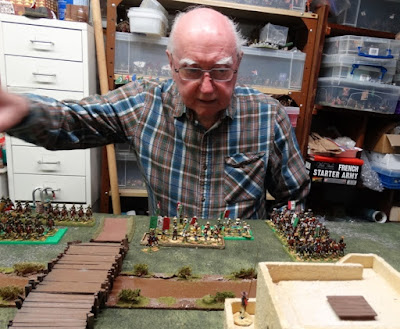 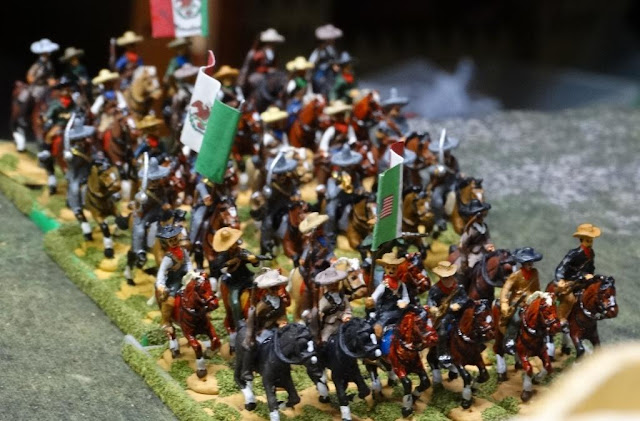 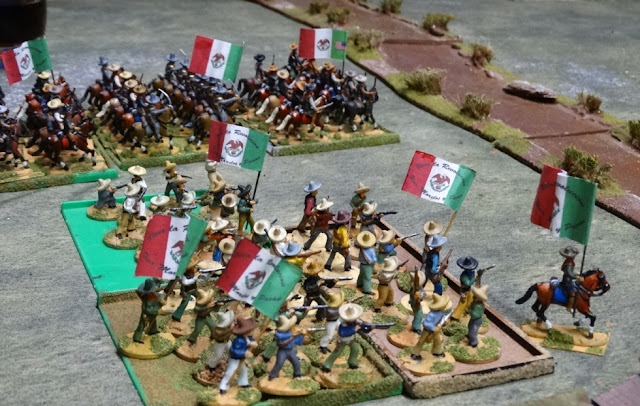 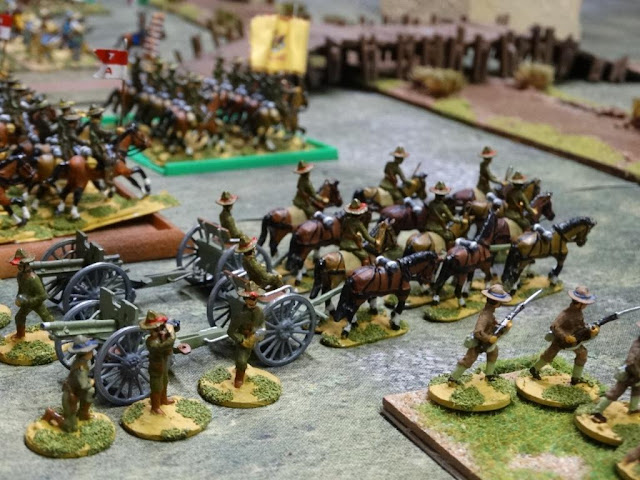 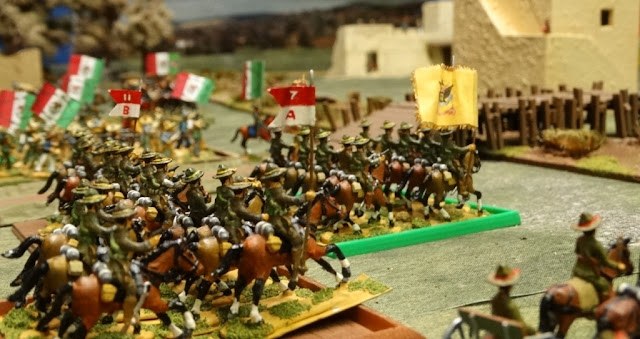 The objective - the Rebel Village 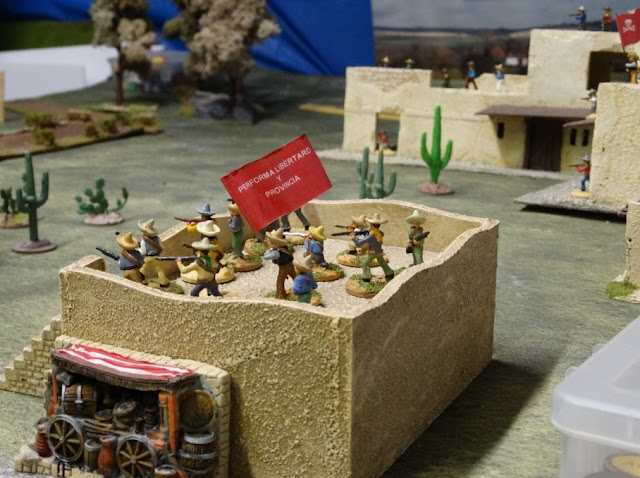 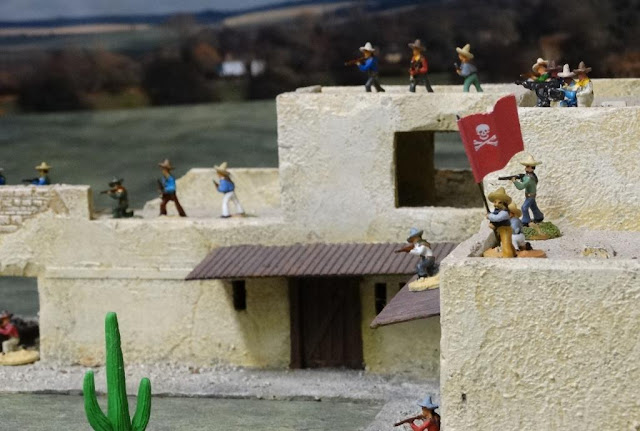 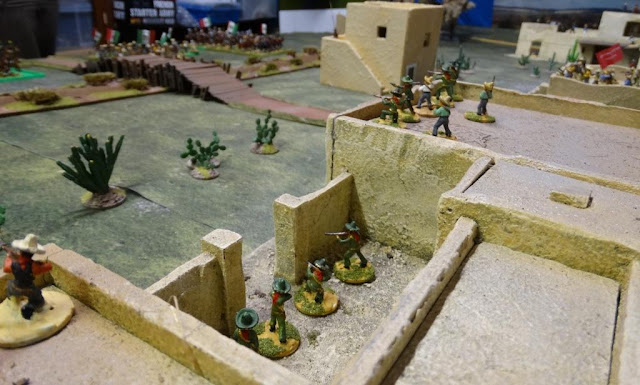 Jack and I took the initiative.  Jack's cavalry immediately set off at a pace crossing the river.  His infantry were far more reluctant and didn't move - probably too hot, a bit like in London at the moment!

Most of the my American troops were eager to get to grips with the rebels and moved forward. 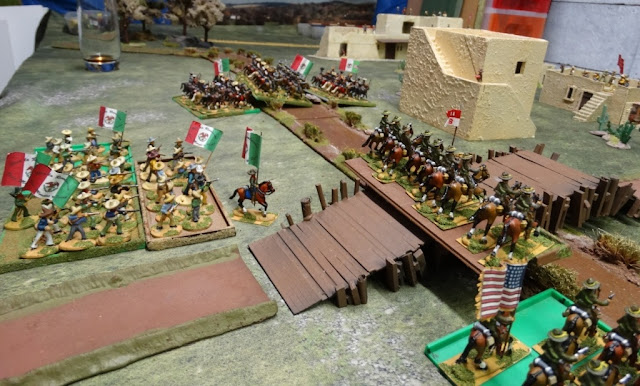 I brought forward my guns to deploy by the river. 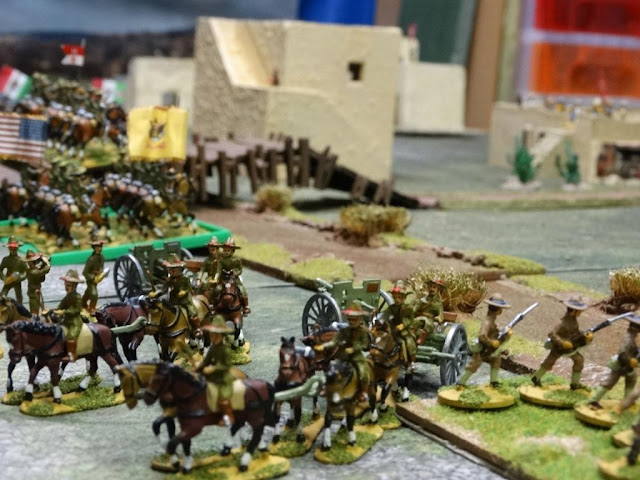 At the end of the move my infantry scored a notable success opening fire on one of Bob's machine guns and taking out the crew. 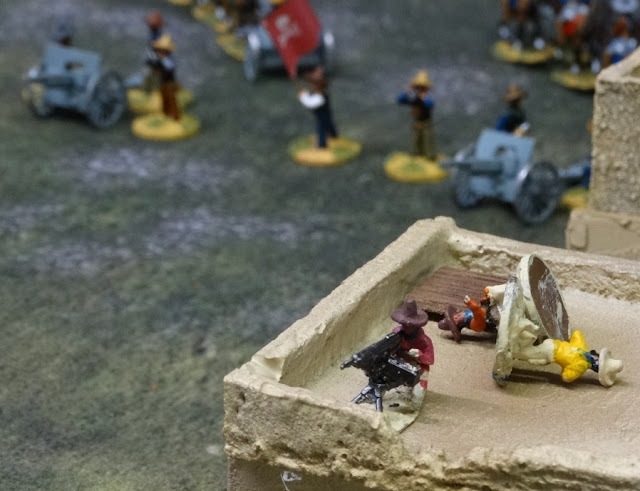 Bob struck back with his other machine gun and some devastating rifle fire from the roof tops to cut through the first of Jack's cavalry units causing a break test which it then failed and fled the field. 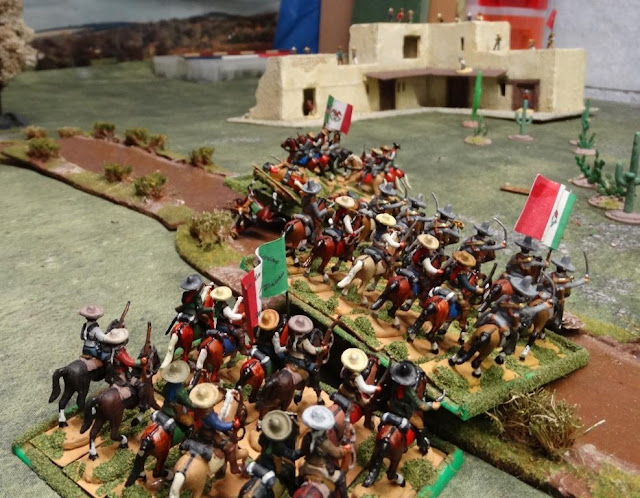 Bob's artillery was less effective failing to register any hits on my advancing troops.

In an attack reminiscent of the 1959 Gary Cooper film 'They Came to Cordura'
my cavalry charged forwards firing on the Mexicans holding the roof tops in the centre of the village. 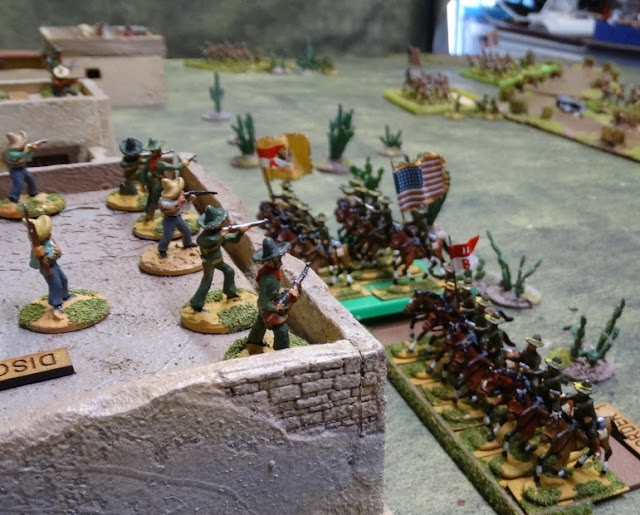 My guns meanwhile opened fire in support of my cavalry disordering Bob's troops and reducing their effectiveness. 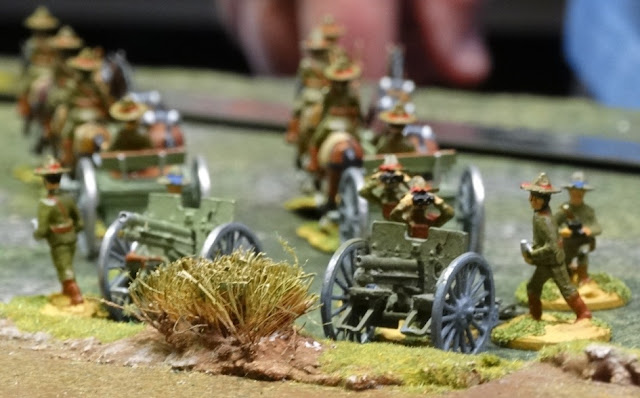 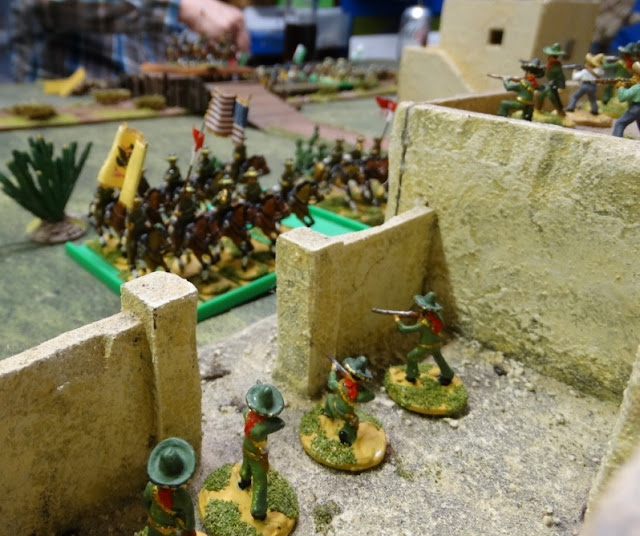 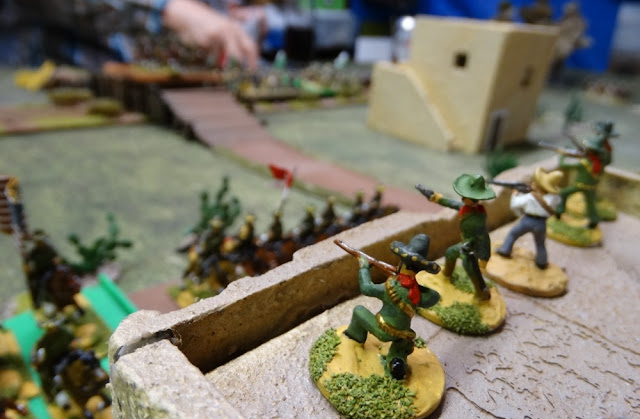 It was hot and I was sent for refreshments.... 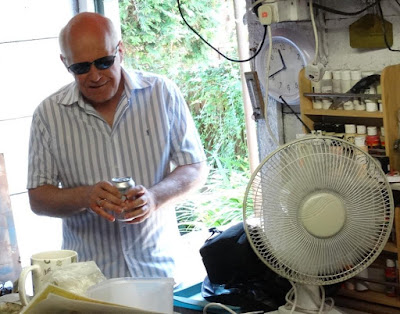 My infantry continued their advance towards the right hand side of the village.  In a bit to stop them, Bob charged forward with a unit of cavalry.  Hits from the infantry and also with a machine gun they managed to deploy not only stopped the charge but sent it reeling back. 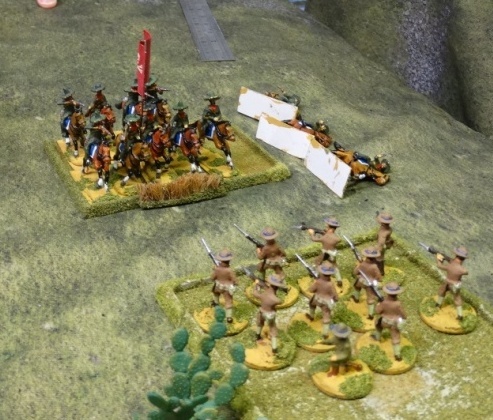 The deployed machine gun represented a 'prickly problem' for the Mexicans 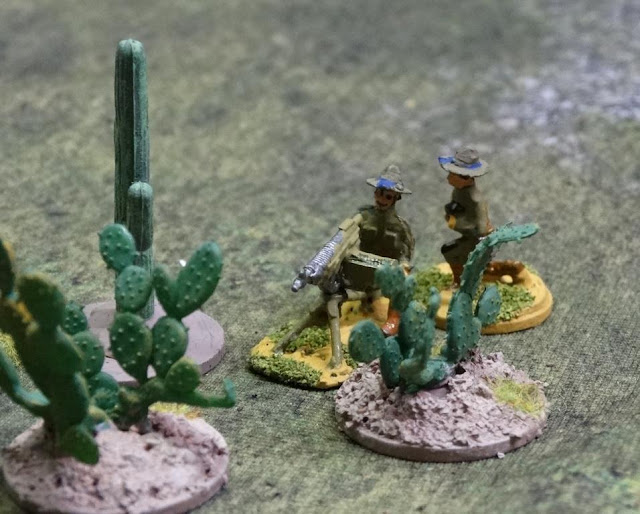 But it wasn't all going our way.  Bob's artillery finally started to find their targets and one American unit broke and fled. 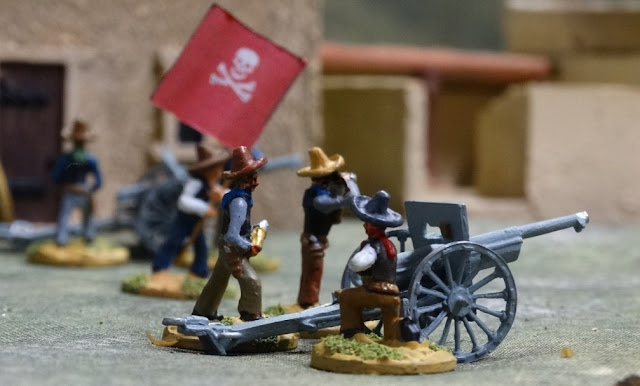 On the other wing Jack's Mexican infantry finally moved across the river.  The American guns switched their targets to infantry on the roof tops in the centre of the village who had been firing on Jack's cavalry.  Two well aimed shots saw them take a Break Test and fall back. 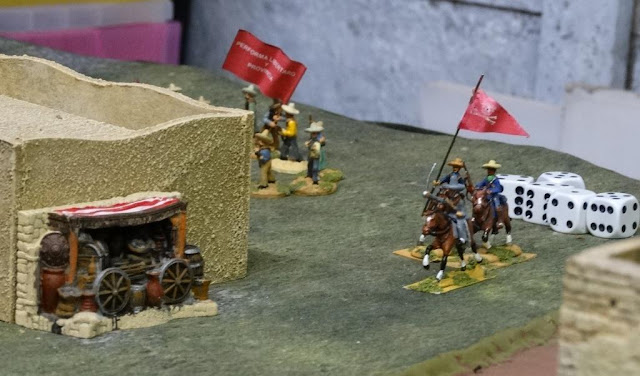 Bob moved forward a hidden cavalry unit to try to take Jack in the flank, or at least divert him from the objective.  Jack them got a command roll of 3 moves and his cavalry charged forward ..... 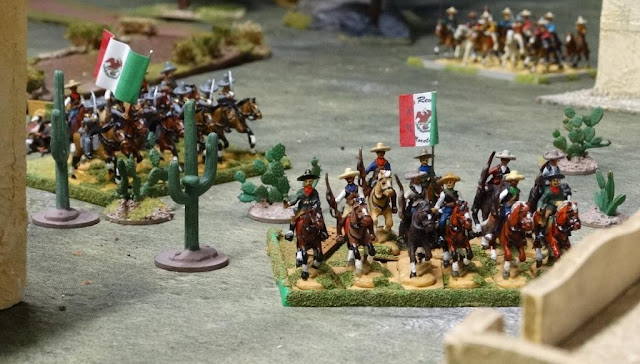 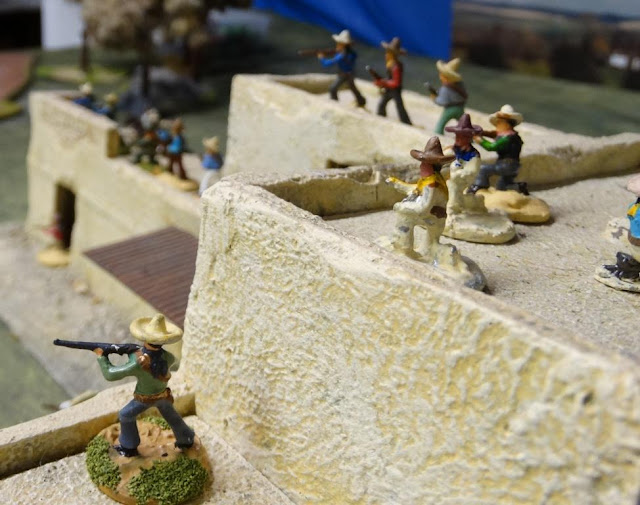 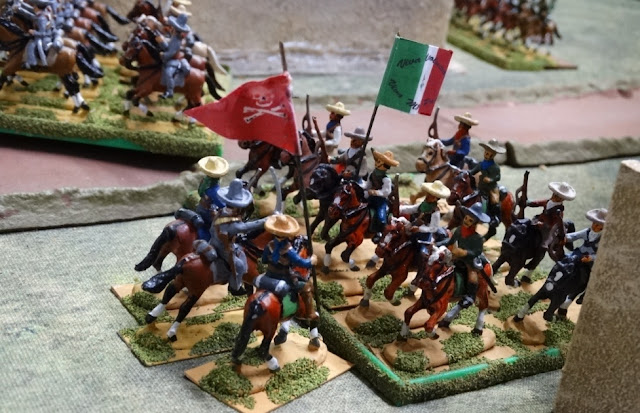 whilst the other prevented a rescue attempt. 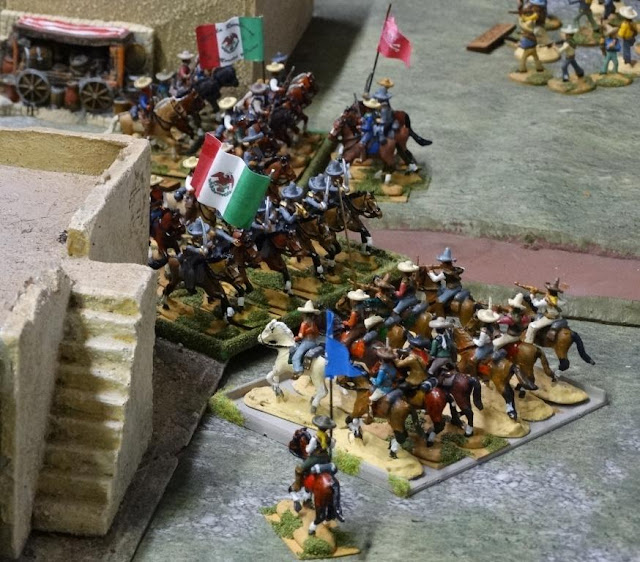 It was a fun game as always. Jack looks pleased with the result whilst the rebel general (Bob) looks thoughtful! 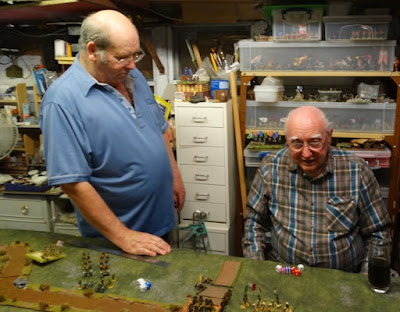 It was good fun and lasted a couple of hours.  The Black Powder rules worked fairly well.  Both sides had machine guns which kept jamming after small successes.

Jack made and painted all the figures on the table in his late 70's.  He is 88 in August so we can excuse the fact that he couldn't remember where the Americans 1916 Harley Davidson motorcycles and riders were. 5 of them charging around  the table would have been fun to see.
Posted by ABC Wargammers at 15:07