Our first game in what seems like an age.  Think both Bob and I have the ‘wargaming blues’ where you fall out of love with the painting and the hobby generally, but we were determined to get over it.  Before I went on holiday to the US I had talked to him about a scenario involving an attack by Confederate forces on a Union encampment.  I even started to set it up on my table, printed lots of tents from my Whitewash City pdfs and then it just sat there half finished for a couple of months.

Anyway we decided it was high time we got to grips with it even if only so I could clear my table without feeling guilty.  It also seemed a very long time since we had had our Civil War figures out.

So here goes, the Scenario as I mentioned above involved a Union Brigade of 6 regiments of infantry, with two guns and a regiment of cavalry.   The Confederates had 2 Brigades of cavalry made up of 6 regiments (4 and 2) and 2 regiments of infantry.  The Union troops have one regiment on picket duty stretched across their frontage in 3 units of 6 figures.  The rest of the troops are in the tents with markers to indicate which regiments are where (i.e one row of 3 or 4 tents would house one regiment).  The gunners had separate tents as did the cavalry. 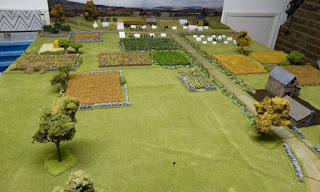 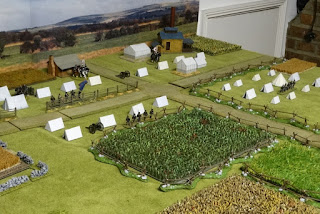 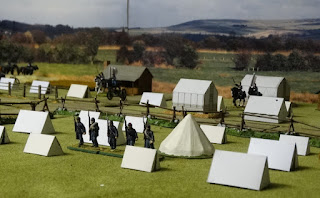 The aim was for the Confederates to inflict as much damage as possible and get out.  Effectively if the Confederates could hit a tent before the troops inside were mobilised then they were out of the game.  I had originally envisaged rolling command dice for each tent, but this would have taken too long, okay for a solo but a bit boring otherwise with some 21 tents to be diced for.  Instead, I decided on a Command roll for each regiment.  The Union forces couldn’t be mobilised until the picket had opened fire and then any troops that did respond to the Command Roll would be disordered for the first round. 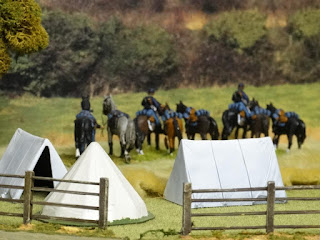 The attack was planned for a 4am and the game was to last for 8 moves, at the end of which the Confederate forces had to be out of range of Union musketry. 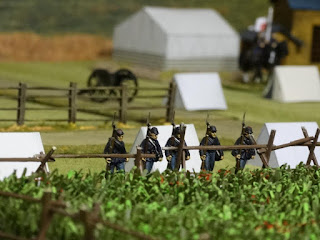 We decided that since it was early morning, we would subject the Confederates first move to Blunder Tests with the double retreat changing to obey orders.  I also made markers showing the 3 Confederate Brigade commanders allowing Bob to move them without me knowing which Brigade was where and only disclosing them when they were visible.

Bob decided that the main cavalry brigade commanded by Gen Fitzhugh Lee and consisting of the 1st, 2nd, 3rd and 4th Virginian regiments would attack as individual regiments, rather than as a Brigade.  They all responded to their Command Rolls and the Blunder Tests didn’t affect them and moved forward in the centre and the left flank. 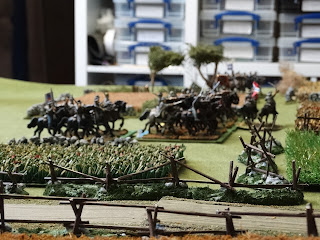 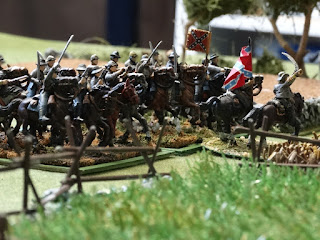 His other smaller Cavalry Brigade consisting of the 5th and 6th North Carolina Cavalry surged forward up the road on the right flank a maximum 3 moves putting them almost in the heart of the Union encampment. 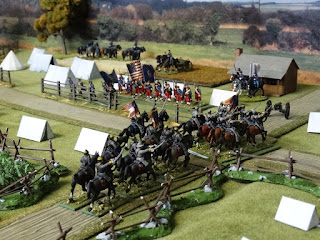 This ‘heroic dash’ allowed me to try to activate the union forces whilst at the same time gave the pickets a target.  All the Union forces on the my left flank responded to orders as did the 84th New York (Chasseurs) in the centre and the 1st New York Battery on the right flank.  The Union Divisional Commander also woke but stayed in the house to avoid being hit or captured by Bob’s troops.  The New Hampshire Battery on the left and the Brigade commander and the 5th US cavalry slept on! 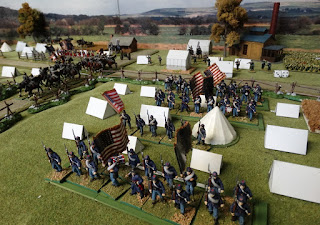 The pickets firing as tiny units actually proved worthwhile with a d6 disordering the leading 5th NC cavalry and throwing the advance into chaos.

Things weren’t going well for the Confederates on Bob’s left flank with the fields and fences proving to be obstacles slowing the advance of the cavalry.  The infantry simply wouldn’t move and the attack became disjointed. 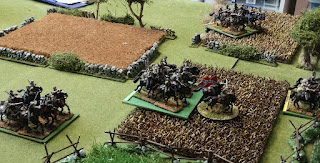 Only the 2nd Virginia managed to break the mould and charged on to attack the 84th New York in the flank whilst they were still disorganised. 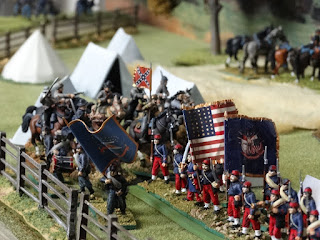 The 84th were driven back and the 2nd Virginia Cavalry followed up forcing them to Retire a second time.  The 2nd suffered casualties and were disorganised.  The lack of Confederate supporting units forced them to Retire.

On my Union turn the Cavalry and the New Hampshire artillery crew finally emerged from their tents. 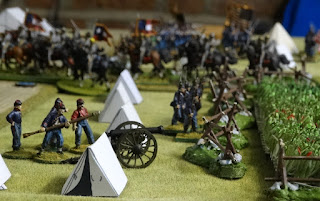 The New York Battery opened fire on the 1st Virginia cavalry and they failed their Break Test and fled.

The Union troops on my right were now organised and opened fire on the disorganised North Carolina Cavalry one of the Freshly raised Union regiments got a Panic Result on their firing and proved to be ineffective.  However the US sharpshooters inflicted damage forcing the NC cavalry brigade to retire.  They returned fire with their pistols and carbines 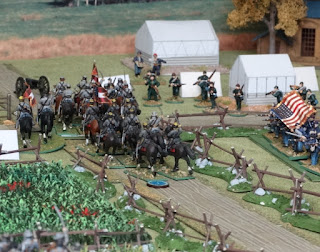 With Bob’s infantry still failing to come forward he dismounted his two remaining Virginian cavalry regiments to form a skirmish line to cover the retreat of the remaining Confederate forces. 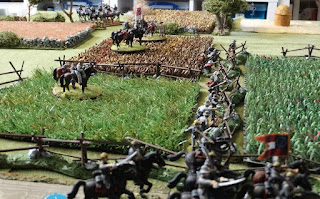 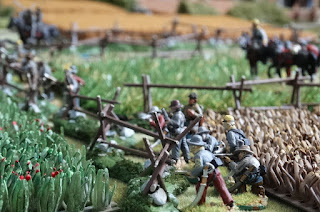 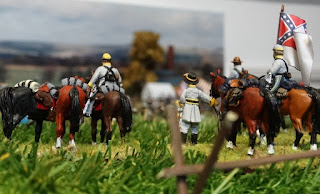 My union cavalry opened fire on the retreating Virginian Cavalry to help them continue their retreat. 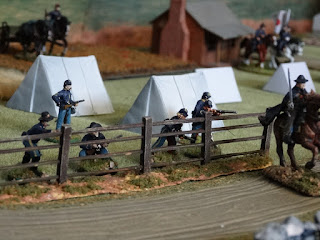 The 1st New York fired again on one of the dismounted cavalry units forcing it back. 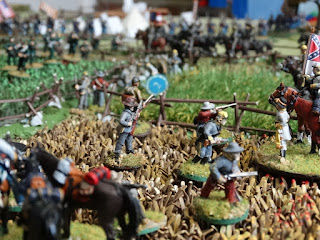 At the same time my Sharpshooters advanced on the retiring North Carolina cavalry and the other dismounted cavalry regiment. 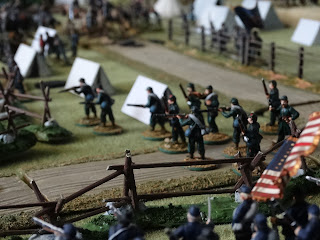 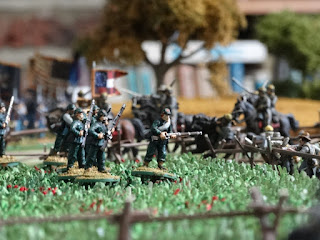 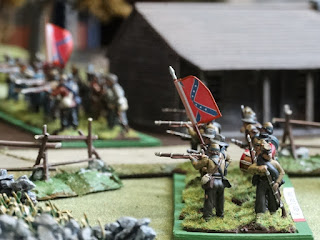 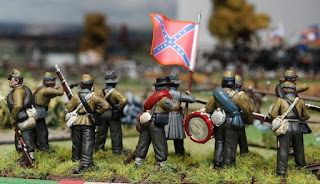 Whilst the 5th Cavalry mounted to pursue the retiring Confederate cavalry 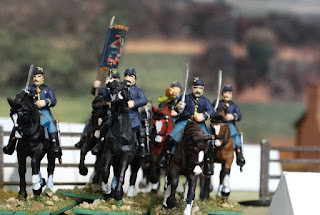 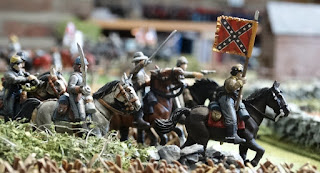 The game finished on Move 8.  We had both thought things were going to go very differently.  Bob’s plan was to advance as quickly as possible, ignoring the front of the Union Camp and hitting the rearmost forces and Union Command before they could get organised.  Then move back through the Union lines.  The failure of the infantry to advance and the slow movement of the cavalry wrecked the plan and my Infantry came to life more quickly than we both thought.

The rules worked well except as usual the disorganisation following a throw of a d6 and the variable movement made it more difficult for Bob, in part because of the various fields and fence which has to be crossed.

The figures were with one exception exclusively from Perrys Miniatures, all the fences were all made by Jack Alexander and the tents were mostly Whitewash City pdfs (paper) with some Rendra and a couple of old Bellona Bell tents.