Decided to get out the 15mm Napoleonic’s for a Black Powder Game.

The forces represent part of the Russian First and Third Army Corps and the Second Cavalry Corps plus a few other units whilst the opposition is made up of the Grand Army Austrian Auxiliary Corps, Saxon 21st Division and the 19th Bavarian Division and various supporting Austrian, Saxon and Bavarian cavalry brigades

The fictional Town of Omsk is held by the Bavarians, with Little Omsk and the right flank held by the Saxon’s.  The Austrians hold the left flank with a Grenadier Brigade supporting the Bavarians. 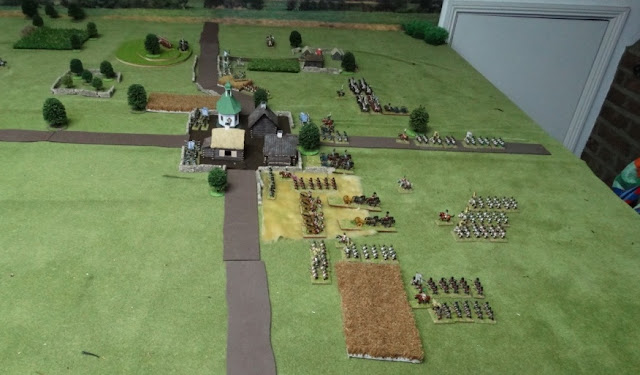 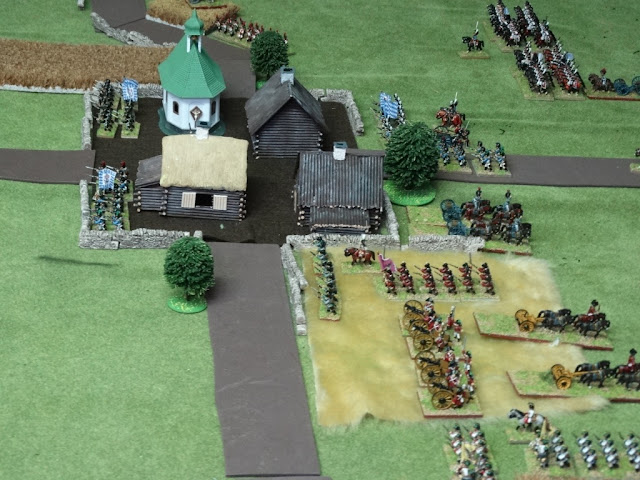 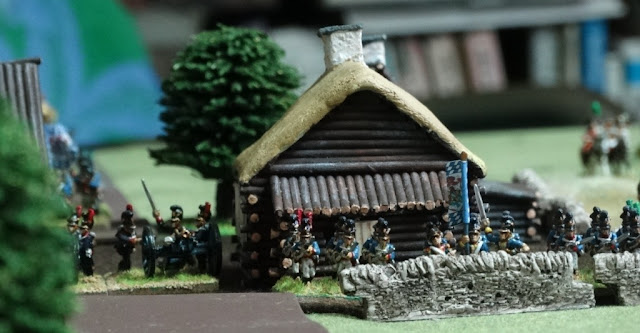 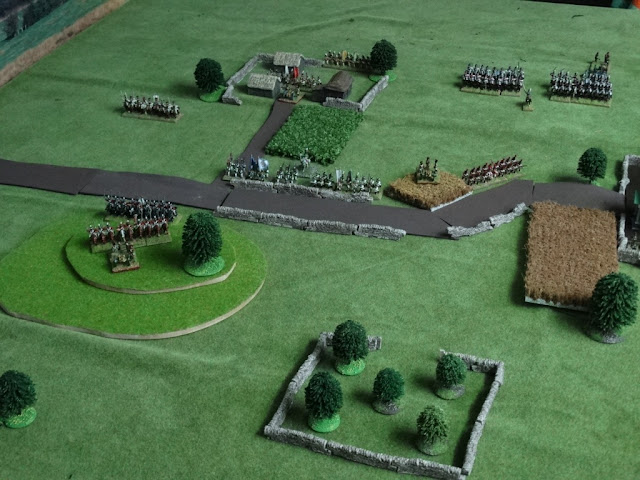 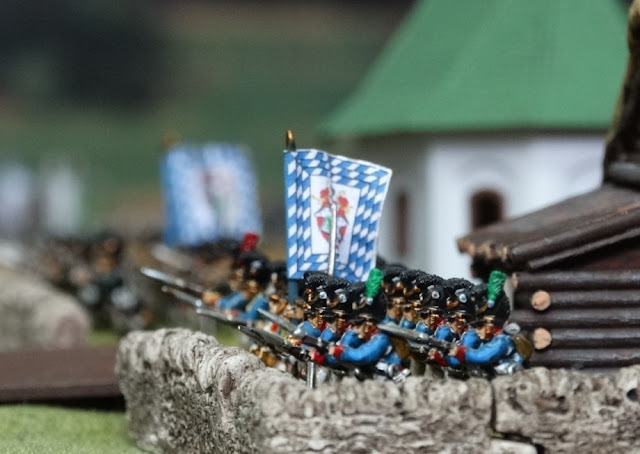 The Russians have deployed with a massed cavalry presence of their right flank (9 regiments), 2 Divisions of infantry (10 Regiments) in the centre facing Omsk and 2 Brigades of cavalry, the Grenadier Brigade and a Brigade of Infantry (6 regiments) supported by 2 Brigades of Dragoons (4 regiments) on the left.  This is supported by 8 guns and 3 units of Horse Artillery. 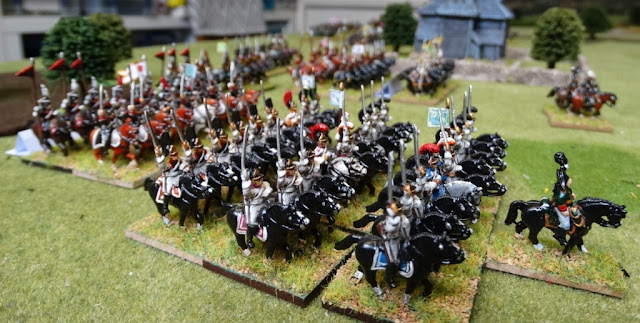 The Russians launched an advance on all fronts.  The Russian cavalry moved 3 moves threatening the Austrian infantry who in turn form square.  The supporting Hussar Brigade moves forward to support them. 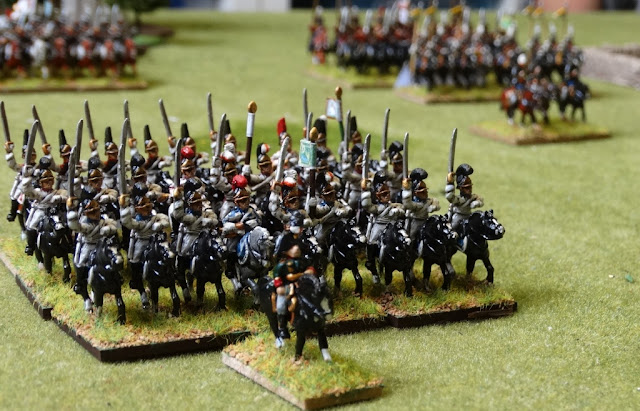 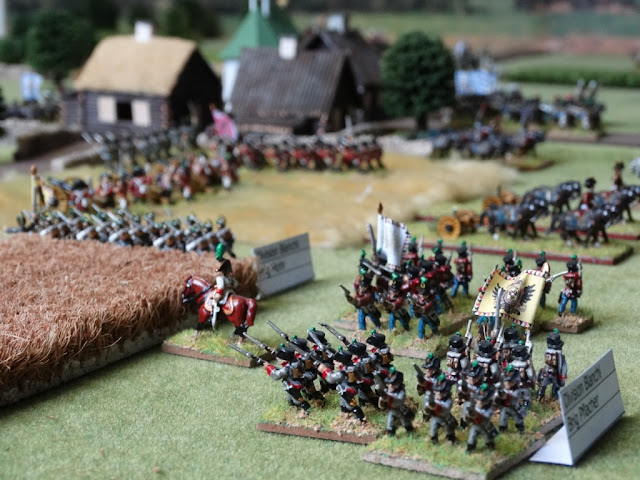 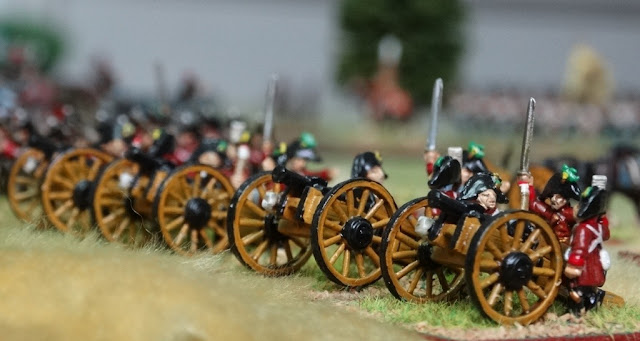 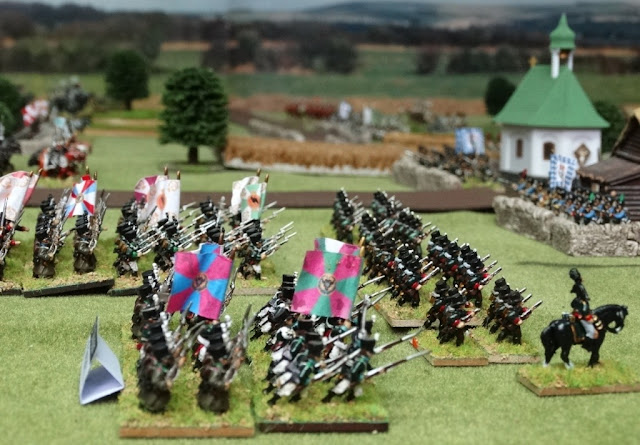 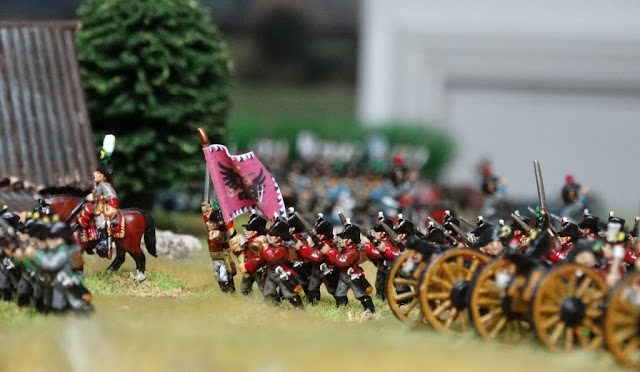 However, to my surprise one of the supporting Russian Brigades launches a charge against the Austrian massed guns.  Fear not 4 guns firing at closing range with all the bonus can’t be under any threat!  Little did I know!!.  My firing was appalling.  The Russian charge surged on.  In the ensuing melee my gunner having been unable to fire properly found the ability to fight.  They held the Russians. 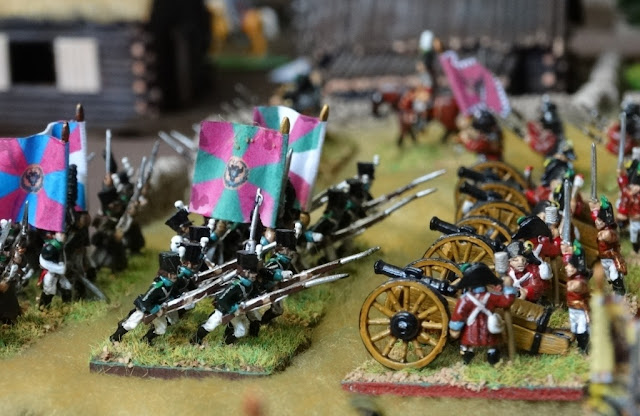 The next move however the gunner were beaten but one forced to retire.  The Russians meanwhile were attacked by one of the Austrian units and they in turn broke, but the damage had been down.  The guns were silenced and a large gap had developed in the Allied front. 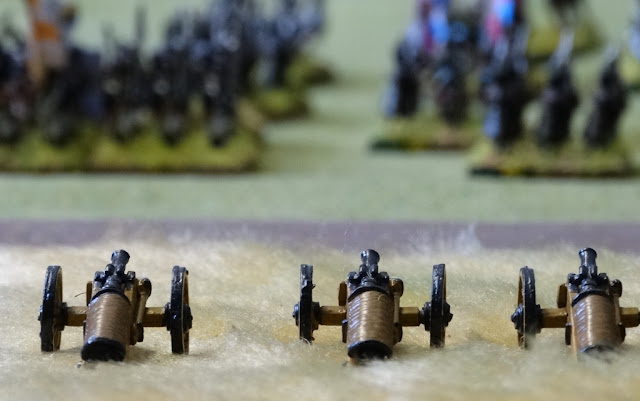 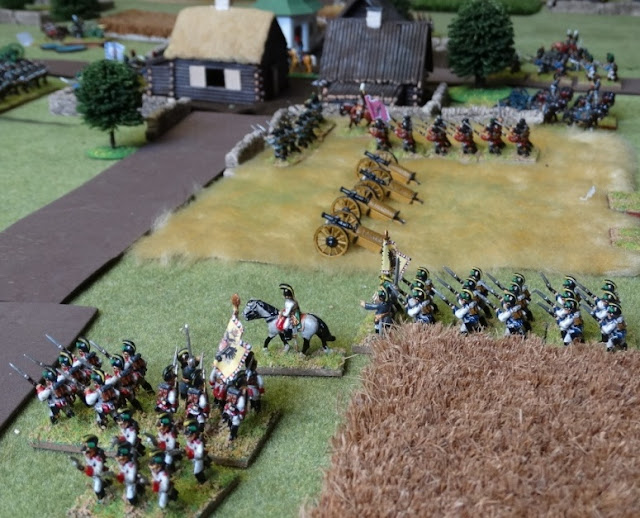 On the left the Russian Grenadiers and infantry supported by their cavalry moved slowly towards Little Omsk. 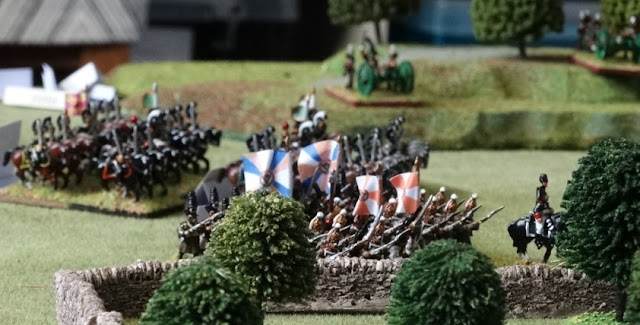 Sensing the moment the Russian Cavalry on the right move forward with the leading Brigade of Cossacks and Hussars charging my Hussars.  My Hussars roll six dice without a single hit and are thrown back by the Hussars and Cossacks 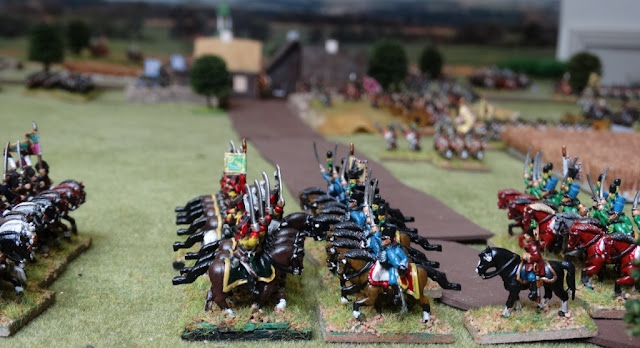 .
In the meantime the Bavarians in Omsk and the attacking Russian are engaged in an exchange of musketry. 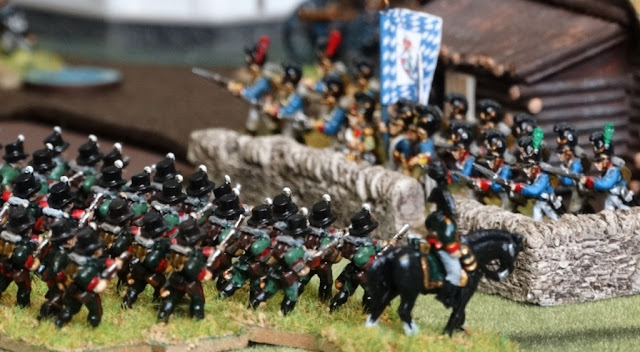 On the left little is happening the Saxon’s move forward to take up position behind a wall along the road. Whilst the Saxon Garde Cavalry advance to threaten the Russian advance. 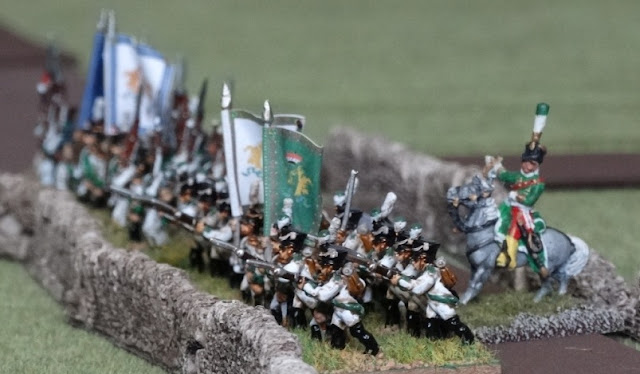 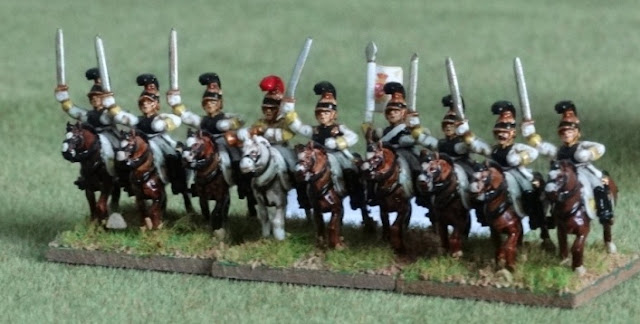 You may well ask what the massed Russian artillery was up to during the game.  On two occasions when Bob tried to bring them forward, they suffered Blunder Tests.  Unfortunately, these only resulted in their advance either one move to the left or one to the right, but enough in both cases to disrupt them and take targets out of their sights.

The Russian leading cavalry brigade comes under fire from the Austrian squares and are disordered and stop and then get a Retire order.  However, the sheer mass of advancing Russian cavalry regiments left them nowhere to go and they merely stop all the other cavalry from moving. 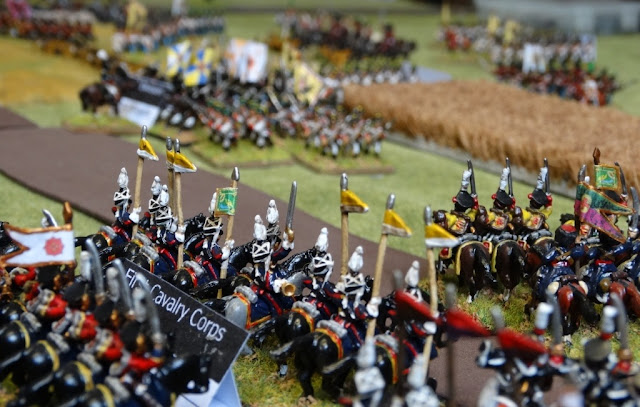 Another bold attack by Bob's Russians sees one of their regiments charge an Austrian infantry column. 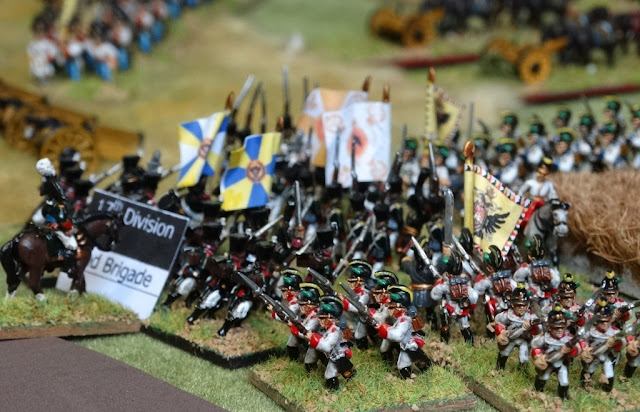 Amazingly the column holds and after a couple of rounds the Russians are broken. 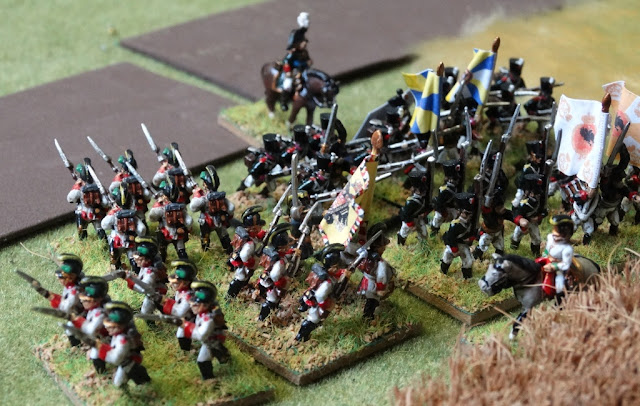 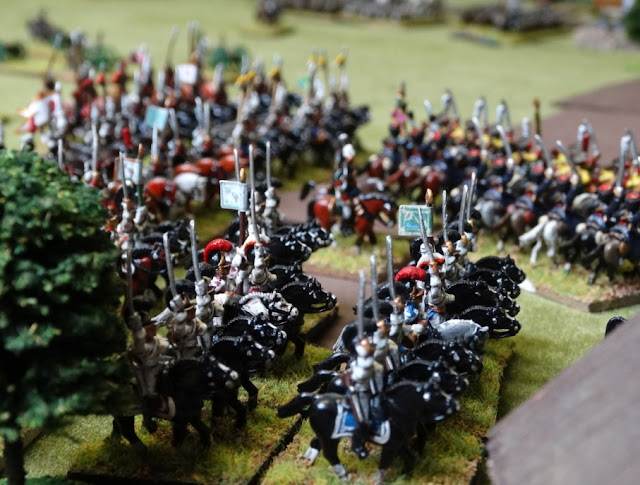 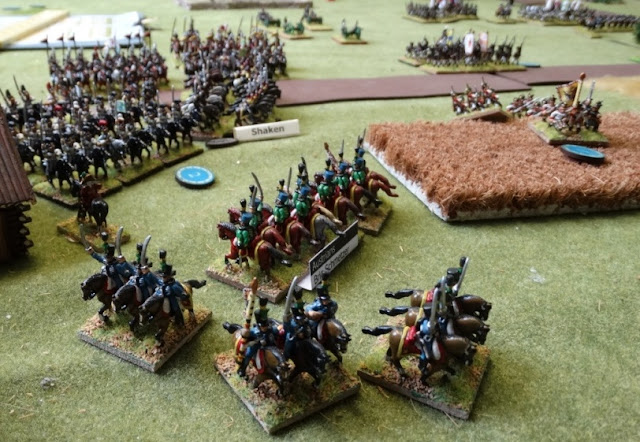 Whilst all this was happening, Bob brought forward his Horse artillery who opened fire on one of the Austrian squares causing it to break. 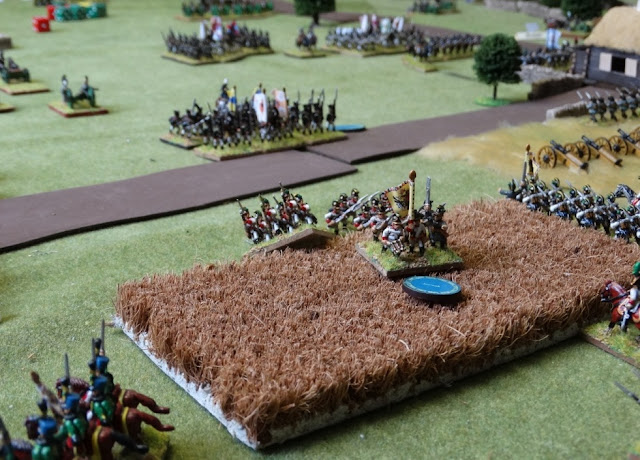 In the centre one of the Jager regiments breaks and flees.

My attempt to get my Bavarian Cavalry Brigade into action ends in disaster with a double 6 Blunder resulting in them leaving the table.

At this point we had been playing for a couple of hours and it was clear that the Russians could take neither of their key objectives.  Whilst the Russians had plenty of cavalry, they didn’t have enough infantry to take on the allies.

The figures are predominately Warrior Miniatures with some Minifigs Russian Infantry.  The Town of Omsk consists of scratch built Russian Buildings by Jack Alexander.  The Church with the green roof is a supposedly 20mm plastic kit of an American 24 hour chapel which I got off of eBay.

Before Christmas I posted a picture of an 1866 Austrian Hussar I had converted using the body of a British Hussar Officer (all I had available at the time) and a French Zouave head.  I finally got around to casting up the rest of the bodies and heads to make up a unit.

This completes my 1866 Austrians, giving me

4 units of Austrian Infantry in greatcoats
2 Hungarian units in white coats
I Unit of Jagers
2 Units of Cuirassiers
I Unit of dragoons
I Unit of Hussars
6 Gunners (two guns and one limber.)
3 Mounted Officers

A total of 159 figures.  All of which started off as conversions and  the overwhelming majority of which are individual conversions.  Only got moulds for the Cuirassiers and the Jagers. 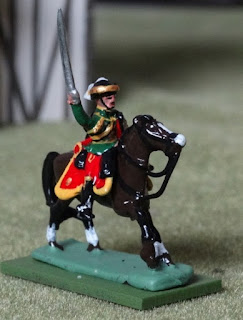