Wargaming over the phone! - Portable Wargames

Having read various posts on TMP and on blogs about wargaming using Skype; Zoom; What's App etc., Bob and I decided to give it a go.  We decided to try out Bob Cordery's Portable Colonial Wargames rules as they were on offer on Kindle and meant that the outlay was limited in case we didn't like the concept. Sorry but rules of any sort these days are pricey and you take a bit of leap of faith that you are going to like them!

The next thing was a 'table' I had packed mine away.  I had some old blue 12 inch blue floor tiles which I thought I would paint green - but hold on, for our first try all the DIY shops were shut and I couldn't buy green matt paint for 'love nor money'.  So, for our first game my boys were all at sea playing on a blue surface.  The aim of the game was to hold the gain control of and hold the cross road. 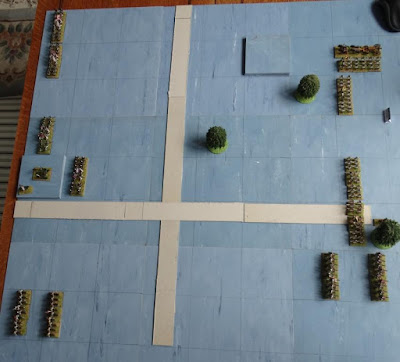 I set the table up with 15mm Napoleonics.  Rather than have a 'passive player' just looking at the table through a computer screen we thought we would mirror one another's tables.  In effect Bob could use whatever scale he wanted and period provided the troop types were the same (infantry/cavalry/artillery) and everyone had the same factors and grid in effect you could have 28mm 18thC Austrians and Russians on one table and Napoleonic ones on another table. We used an 8 x 8 grid my squares were 4"x4" and Bob's were 6" x 6".

Come the day, the video technology failed us due to the famous 'Poor Connection, Reconnecting. Video will be resumed shortly'  making playing visually impossible,  So we just decided to talk over the phone and roll dice each telling one another on our turns what unit was moving from which grid to the next.

We used the Colonial Rules but with Napoleonic figures as I didn't have any colonials - apart from the British and 400 odd Zulus which I had forgotten about that is. 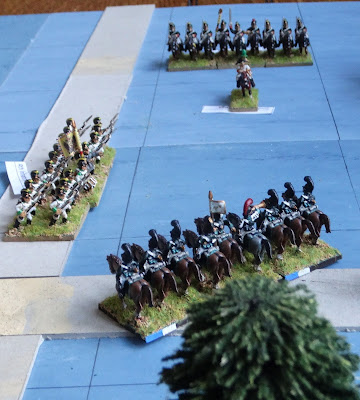 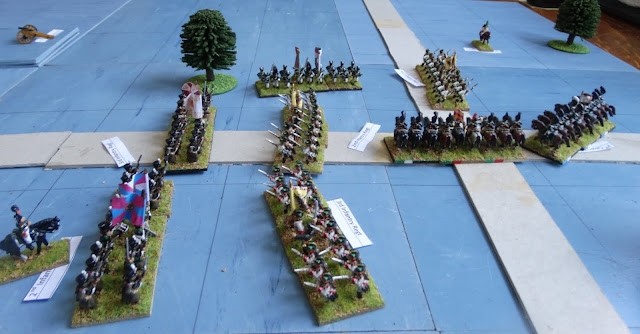 My initial reaction to the rules was 'ohh' as I lost initiative roll and Strength Points SPs to Bob's dice rolls.  Indeed I did ask him at one point whether he was using that old Salute die which had 2 6s on it!  But I couldn't get away from the fact that my dice rolls were rubbish anyway.  But as the game progressed I really warmed to these rules and playing chess like move 'E3 to E5' short of thing over the phone worked.  Bob told me his moves and I moved the figures on my table accordingly and vice versa. 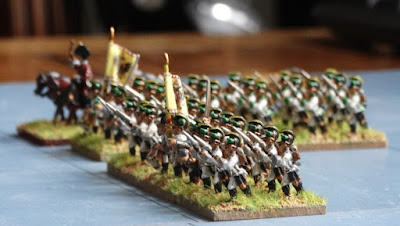 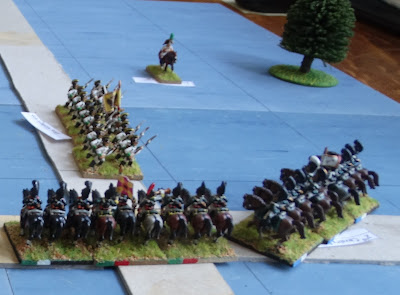 After and hour and a half or so, I lost on the basis of Exhaustion points but it turned out to be a very close run game and thoroughly enjoyable.

So I bought the actual Portable Napoleonic War Game set of rules, the DIY store at the bottom of the road was open so I sent my daughter with a colour swatch and my blue tiles became green!  This time it was Russians against Ottomans.  I had them in 15mm and Bob has them in 28mm.  We increased the table size to 8 x 10 squares.  There are instructionetc for written rules but we choose to leave these out for the purposes of this 'test' game.

The two 'green fields' were deemed impassable.  This was a mistake as it limited cavalry movement  resulting in some very static slogs to try to break through the gaps. 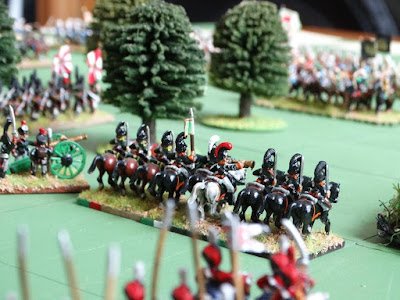 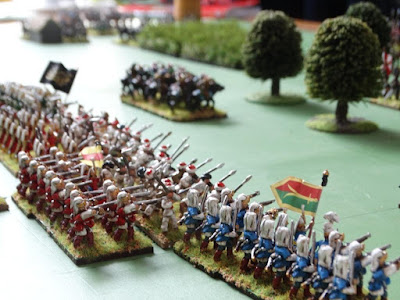 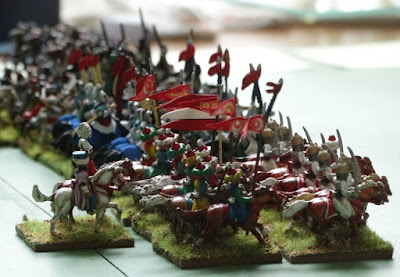 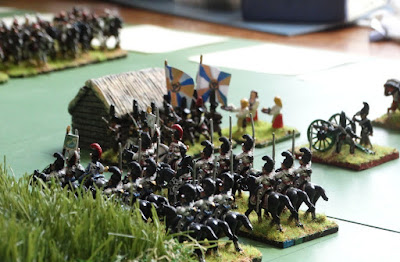 My Guard Cuirassiers didn't prove as effective as I thought and were pushed back until eventually one of the Ottoman heavy cavalry regiments broke as its SP shrunk to nothing..

On the other side of the 'building' Bob's irregular cavalry held up my advance I eventually broke one unit but forgot to move forwards only to find my path blocked by another unit. 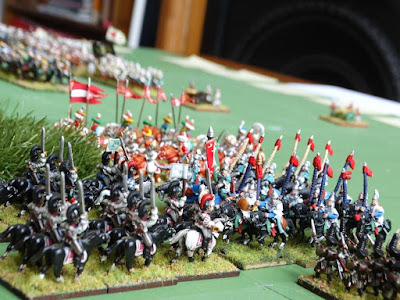 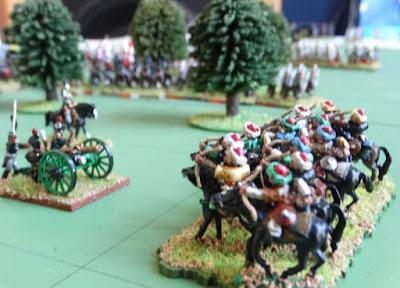 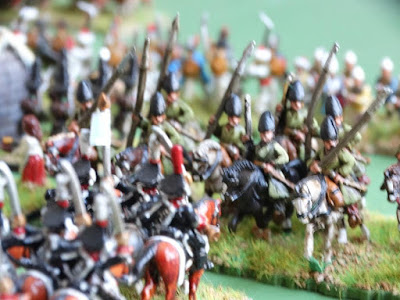 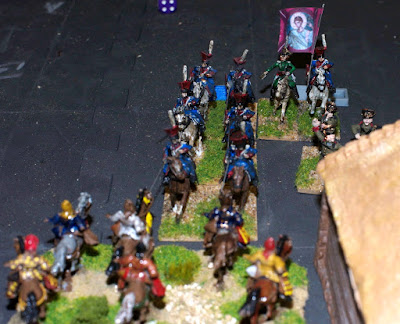 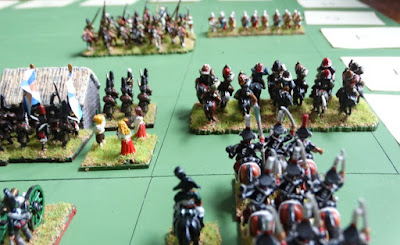 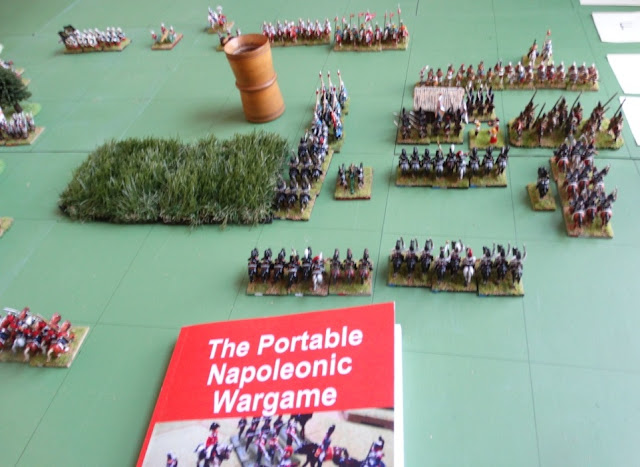 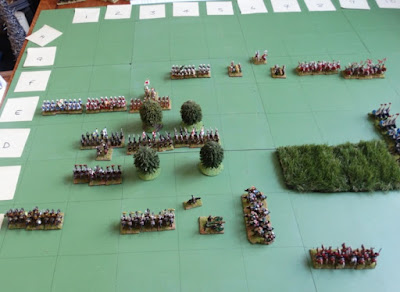 I did destroy 6 of Bob's units but these were basically poor quality infantry he used to shield his Janissaries on the left flank from my infantry and some units of light cavalry and poor infantry on the right.  We got this wrong in terms of the type of troops we choose for the terrain.  Too much cavalry on the Russian side.  The Russian Field gun did sterling work deriving back units of Ottoman heavy cavalry but the horse artillery couldn't get into the game.  Bob had similar problems with his guns which after some initial salvos couldn't find any targets.  The rules on Close Combat seem counter-intuitive and slowed us down as we had to forget some of the ways of thinking we were used to in terms of the effects of Commanders etc. and reverse the way you calculate hits from firing in these rules.  Once we got our heads around it it made sense but it took a long time and slowed down the game which took a little enjoyment from it.  Now we have got it we are determined to try again.

No substitute for a game in the same place but a very good next best thing and we both had an excuse to get figures on the table even if in different scales and 'grid' table size and to move them about always a pleasure in itself.   So all in all a plus in the circumstances.  Thanks to Bob Cordery.

Following on frrom the last post, I have now finished the Stretlets Foot Rifs.  Like their cavalry compatriots these are lovely little figures, with lots of details.  You get three sprues of identical figures plue 3 (one on each sprue) and 5 command figures (41 usable figures). Streltsey 16th-18th century Russian Infantry.  Not very helpful in the terrain of North Africa and Arabia.  Fortunately, I was able to pass these on to John Cunningham.

What is it with the designers of plastic figures that it is almost essential to include a number of questionable poses - in particular figures clubbing with rifles.  The same is true with this set.  Worse still is that there are 2 poses using rifles as clubs on every sprue - 6 comparatively useless poses. 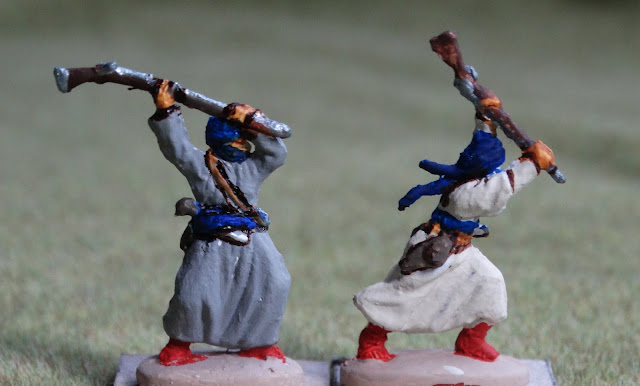 Having a good look at one of the clubbing figures, I thought that I could reasonably convert one of the two poses to a standard bearer.  I think this has worked well and was a very simple conversion.  I am not sure whether to convert the other 2 figures. 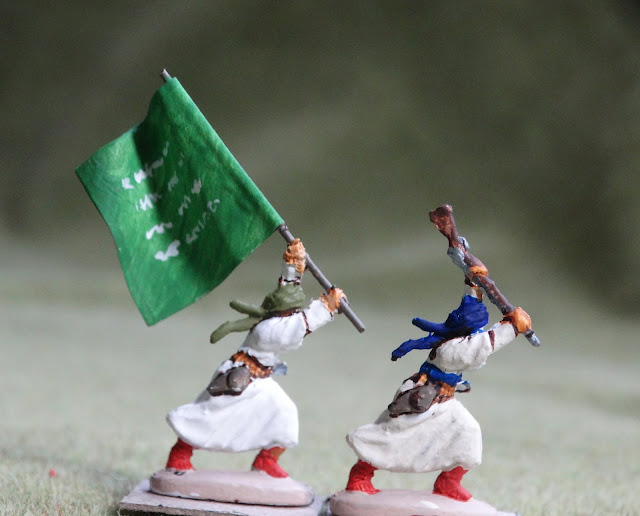 Amongst the other two poses are 3 figures with Lewis Guns. 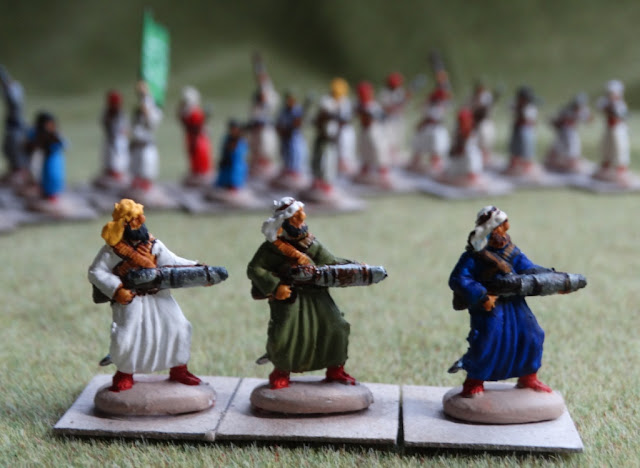 There is a nice 'Command Group' of five figures. 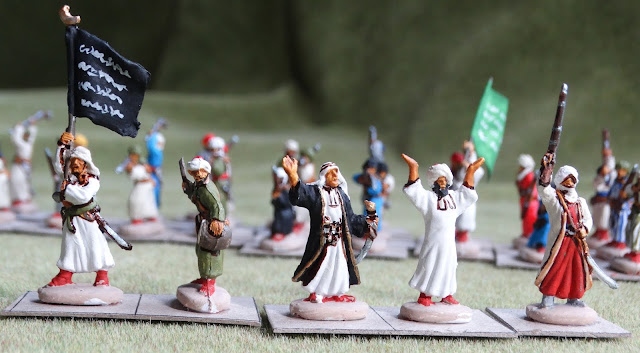 The rest of the figures are useful riflemen. 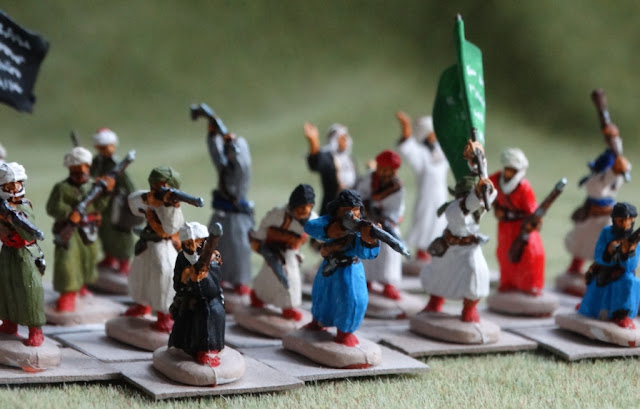 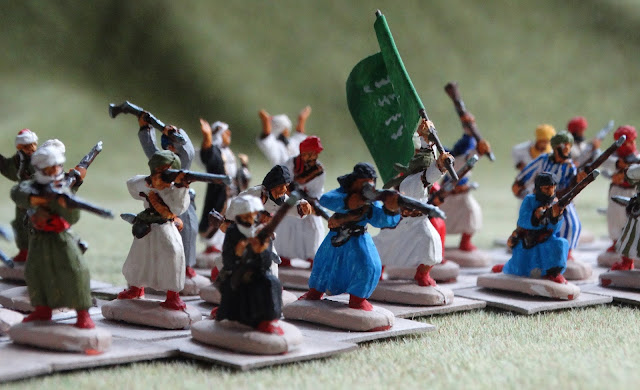 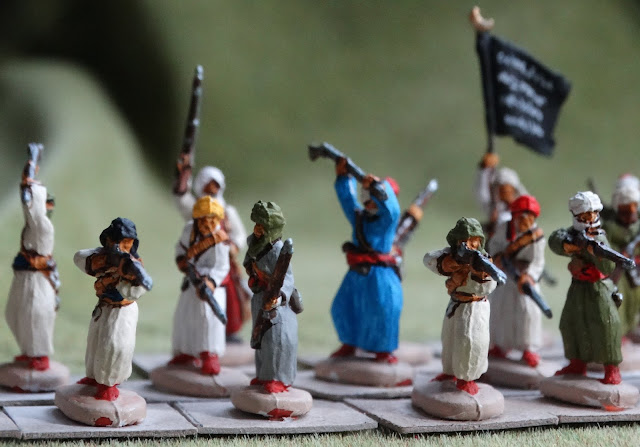 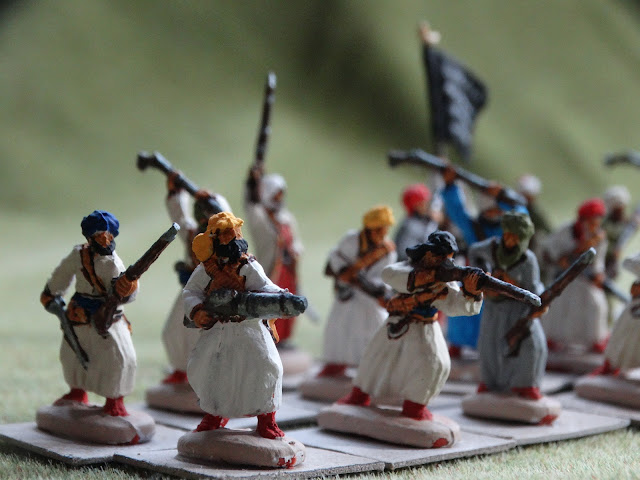 At the moment this set is easily available on ebay and from a number of suppliers.  I didn't realise that Strelets 'retire' sets seamingly quite quickly.  There was a nice set of Arab Uprising figures listed under WW1 which would have worked well with this set.  However, even though is was only released a couple of years ago,  it is no longer available, such a pity.