Back from the US for a few weeks now and the painting and converting bug has left me.

However, I had on the table some conversions I had started before I went and I slowly - very slowly - set about painting and finishing them.  The idea stemmed from an article I read  I about some of the Frei Corps in the Schelswig Holstein War and they seem very much like civilians who turned up with the minimum of uniform - maybe an arm band and a flag.  This set me wondering if I could make some civilians who could fit into any of my 1866-1870 periods.

The French Revolutionary War Citizen (FR5) with musket is an excellent starting point. 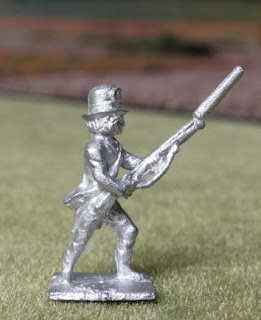 The figure is available from John Cunningham so no struggling trying to make moulds etc.  He looks very revolutionary with his cockade, but a quick file can remove this.  The coat is a bit early 19th century but some of this can be disguised with paint.   The other thing you can do is to play with the shape of the hat with a simple file a big rough file to reduce the width and then a finer one to finish the detail.  A plume can be added made from green stuff to give if a bit of style. 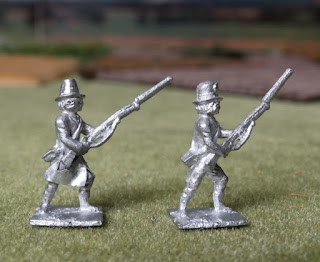 I tried to go a bit further and make a fuller coat.  I use bits of drinks can cut with scissors and glued in place and then filed smooth.  This was a bit of a pain but worth the trial for a bit of variety but he is going to be very much a one off.

Having seen pictures of 'cadets' and university students wearing a peaked cap of sorts I did a head swap with a Saxon infantryman head I had left over from a another conversion to give still more variety. The Spanish infantryman with up turned brim also readily available can also be used 'as is' or you can swap as shown below.  The absence of back packs makes them more like civilians or Frei Corps troops/civilians rushed into action. 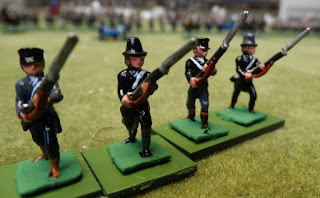 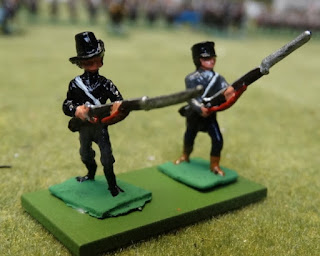 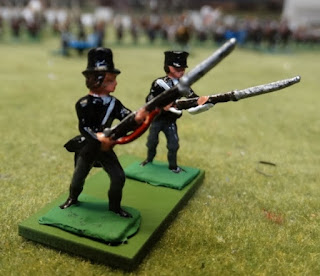 When I looked again at the picture on the cover of a recent issue of the Foreign Correspondent a couple of the figures looked as if they were wearing hats like those in the ACW.  I have a lot of Perry's figures and you always get more hats than you can use so I filed and roughly cut away the hat from one of the Revolutionary War figures until it was flat and super glued on a plastic hat it worked a treat.  I added a plume for the hell of it.

This is a lot less daunting and simpler than swapping heads and gives instant variety to a single pose.

Whilst I was at it I also trimmed the coat tails on a couple of the Revolutionary War figure for variety. 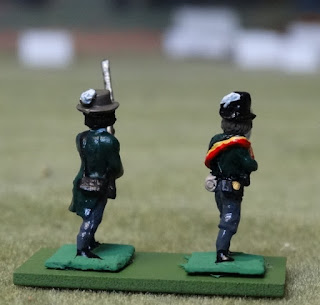 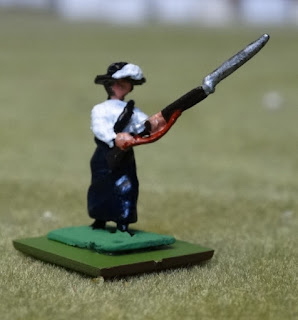 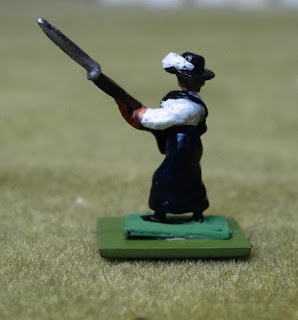 I also modified FR2 the Citizeness with pitchfork to give her a pike.  I think I will make her the standard bearer.  My attempt at giving her a headscarf was less successful! 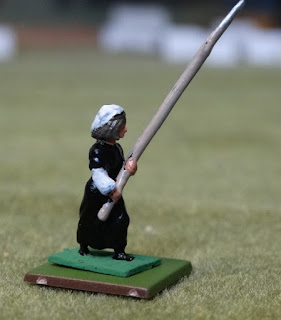 Anyway my unit of Frei Corps/Militia/townsfolk - only 12 strong - will no doubt defend their homeland with vigour.