Whilst fiddling about making the casualties for my Ambulance service, I came across a couple of conversions that I had started with the idea of making a small unit of Prussian Pioneers.  I wasn't wild about these but thought I should just go ahead and painted them up.

The figures are based on the 2 Prussian Artillerymen and one Prussian infantryman.  The conversions are fairly obvious. 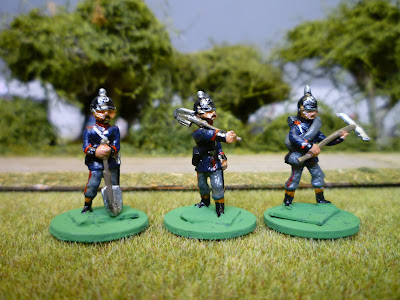 Given the figures I used,  you can do exactly the same conversions to create Bavarian or Wurttemberg Pioneers although I have struggled to find any pictures or uniform details for either.  The only uniform I did come across was a Saxon Pioneer which is the same uniform as the Prussians but in green.

The 'shovels' are from Irregular Miniatures SW20 Farm Implements.  Gripping Beast also make a set of tools SC62  12 tools for £2.00, as do Essex Miniatures X52 which includes Hammers, shovels and picks 8 tools for £2.50. Prices exclude p&p.  I am sure there are others out there, but these I have used in the past.  One set of tools allows you to make up a number of 'pioneers'.

My latest messing about is to make a third gunner for the Prussians, Bavarians and Wurttembergers artillery crews. I always think they look a bit odd with only 2 gunners/poses.  This one will be holding a rammer and will be a conversion of the gunner with the shell. 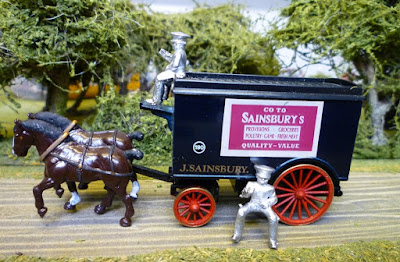 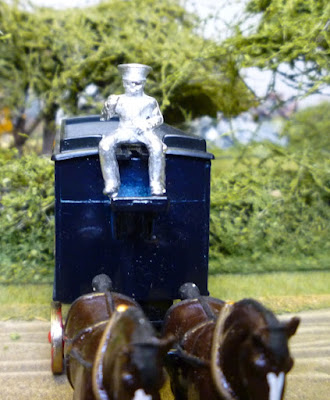 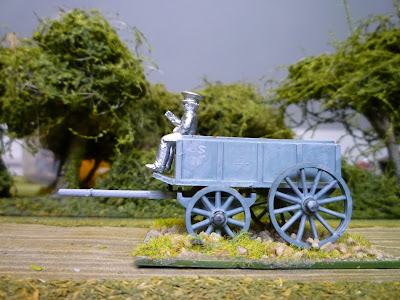 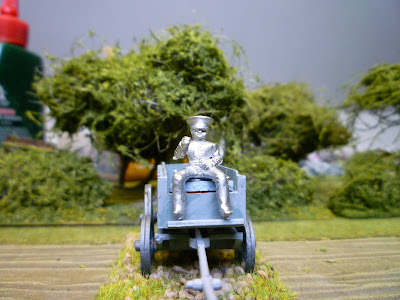 Not sure if it is to do with my condition and the frequent trips to hospital but I seem to have become a bit fixated on Ambulances!

The more I looked at the anniversary model of the British Red Cross FPW ambulance, the more obvious it was that it was merely a standard Lledo standard model with transfers.  I therefore went on Ebay and found 2 Abels of East Anglia Bros models unboxed and with no drivers being offered for 99p plus 2.90 P&P.  I put in a bid of £1.00 and won them for 99p.

I created a template for the windows based on the original FPW ambulance and cut it out of an old Christmas card.  Easier to cut than cereal packet and thinner.  I have included all the measurements if you want to give it a go yourself.  You will need some extra lengths of 3mm wide strips of card to run along the plan front face of the model, you just line these up with the window frame and one at the bottom edge. I use Evostick wood glue to fix the card to the model.

Drivers.
I am not entirely sure where I got my model Minifigs carriage and passengers, but you can buy just the passengers who I have converted into drivers, limber riders etc.  There are 2 different models; WAGX3 is 2 British Napoleonic Officers – Open coach and WAGX4 two French Officers  - Open coach.  Needless to say for my purposes it was off with their heads.  I sacrificed one to make a seated figures for the Foundry Prussian gun.  For that exercise I didn’t take that much care separating the 2 figures using snippers to cut them apart and losing the arm of one of the figures in the process.  Sensibly, I never threw that part away and he has made an appearance as a Prussian cuirassier casualty (see below).

With a bit of effort with a scalpel, some emery paper and a file I was able to separate to two figures completely without damaging either and this gave me two drivers, albeit one looks like he is signalling a right turn! 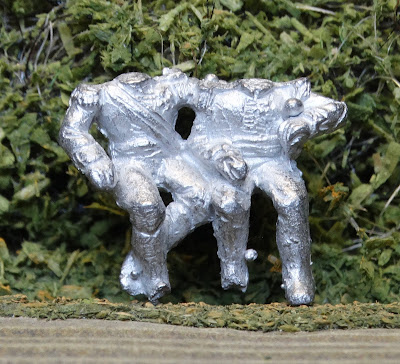 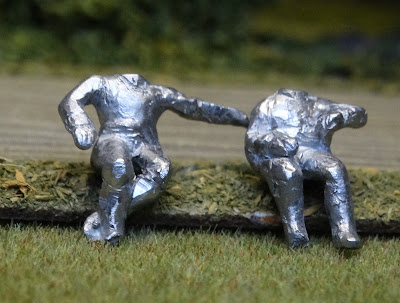 Since then looking at the Minifigs 25mm on line catalogue, I came across a picture of a Russian Wagon driver in fatigue dress RNX1.  I have ordered 2 of these in the hope that, whilst they are not S range, they don't look as if they are modelled on the same lines as the more bulky 'Minifigs'.  In which case I (and you dear reader) may be able to be able to do a simple head swap without all the cutting about.

From the various illustrations on line, 'uniforms' for these ambulance drivers and staff seem to be crosses between civilian and military uniforms, so it is a bit of free for all.  I stuck with the British blue uniform for the drivers but somehow managed to give them new heads with Kepis which, when I painted them, left them looking a little American Civil War-ish.  May change them.

Casualties
Having created these ambulances (why does anyone need 3?)  I felt there was a need for some casualties to place around them.  It was back to my scarp box and collection of headless and arm less figures.  Starting with the French General mentioned above.  I drilled and bent a bit of florist wire so he could rest on the ground and then moulded some green stuff around the wire to give him an arm.  No matter how many times I use this compound I am hopeless with it!  The arm is too thick but after a lot of unsuccessful fiddling I gave up and decided that paint deceives the eye!  I gave him a Prussian Cuirassiers head which saved me having to do too much alteration to the body. 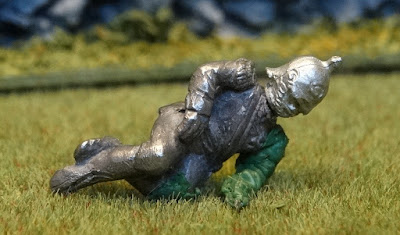 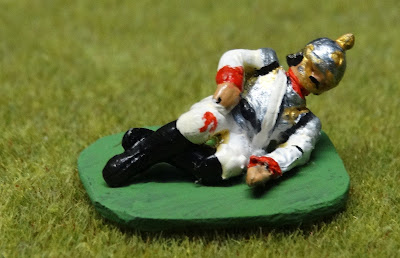 The other figure I had a lot of was the FPW artillery man with shell.  Probably the easiest figure to work with.  I literally cut away the base with my metal cutters and then filed to remainder back to the figures boots.  File away the shell and you can just leave it at that.  His hands are clutching his stomach.  I felt I wanted to reposition his left right arm so using my hand drill I drilled a series of holes to help me get a scalpel into position to cut the arm free.  A tip here,  drill through the arm at the shoulder into the body first as this helps to reposition the arm later.  Separating the arms also allow you to create a sling on the arm left attach to the body. 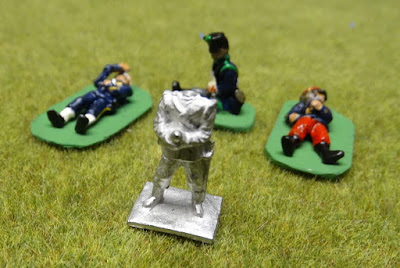 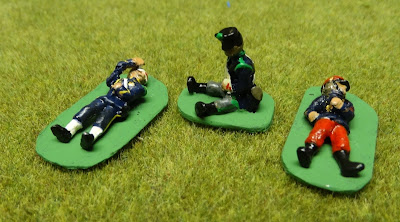 If you are really feeling adventurous you can use exactly the same figure to make a sitting pose.  I merely cut the legs away from the body again using my cutters and filed things smooth; super-glued it onto a base and filled the gaps a little more successfully with green stuff.  Again I gave him a sling made of cooking foil.

A very simple conversion using this figure is to remove the base; file back to the boots; file away the shell;  file the back flat and fix it to a base.

You can cover the figure with a blanket made of cooking foil, or ‘cigarette paper’ or a piece of old rag if you fancy it.

eling really cocky,  I decided to try to make some walking wounded.  I was going to try to use the same figure and attack it with a soldering iron but my nerves are still not up to it.  So I had look at my spares and wondered if I could us a cavalryman?  After all he has two legs and they are sort of at a stride.  So again, out came the metal cutters and my large and small files and some emery paper to remove the saddle cloth etc.  I drilled his arm at the shoulder as described took it off and repositioned it.  I squeezed the legs together a bit with a pair of pliers and bent one back, again with pliers, to give the appearance of a walk.  I was going to get rid of the sword and give him a cane to rest on, but the sword gave me instance balance on the figure so I left it.  Again, the figure is clutching the reins , i.e his stomach.  To disguise this I gave him a sling.   I padded out the gap between the legs with green stuff.  I started with a Bavarian Cavalry head but thought it didn't work with the body.  I should stress that all the tools I used are very crude and easily available at any DIY store and may also account for the end result being not perfect. 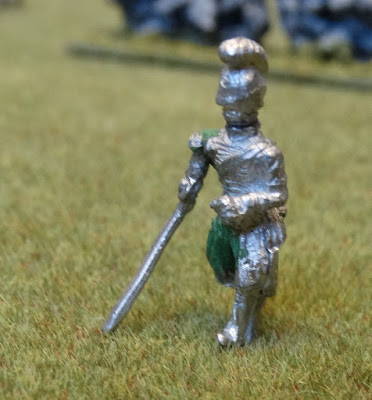 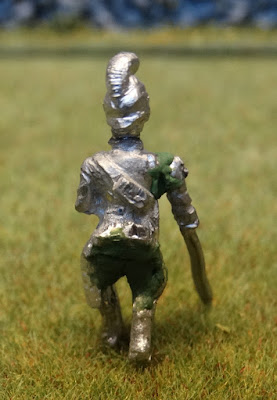 So I swapped for a French Hussar's busby head. 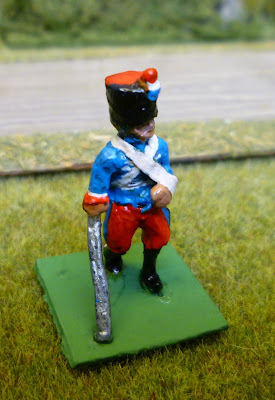 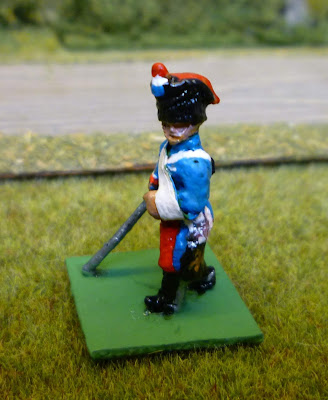 Fortunately, the French Hussar model has ‘baggy trousers’ not sure I could do it with tight fitting cuirassier leggings, but I am going to give it a go as I sort of fancy a 'personality/command ' stand with perhaps a dismounted and mounted officer set up.

So my original project has grown! 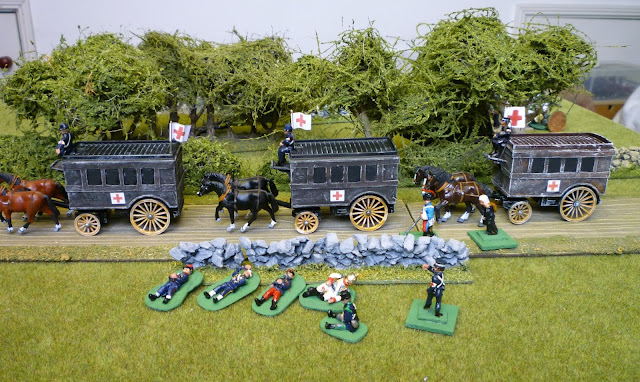 What is even worse is that I have come across some pictures of Ambulances in the Crimea War!!  In particular Dr. Smith's New Hospital Wagon.


This may be a step tool far!

Sorry about some of the pictures, my camera has developed a fault which I can't clear and will probably need to go back to Sony for repair.
Posted by ABC Wargammers at 16:53 10 comments: