Battle of the Bridge. A Thirty Years War Pike and Shotte Game

Our last game of 2016. We fought the battle at Bob's using his figures and he helpfully wrote up this report of the game for our blog.

This game was based on the mercenary captains’ campaign in the Pike and Shotte Devil’s Playground supplement. Three mercenary captains each leading a brigade must fight a series of battles on their way to meet their employers. The first is to take and hold the only bridge over an unfordable river.

Alan took the part of Officer Ensign Hakan Nilson Skytte, the senior officer of the three Swedish Protestant captains – I was the Catholic German Fullkwin von Brunn. The three brigades on each side were diced for and each was different.

The table was set up by random dice throw. 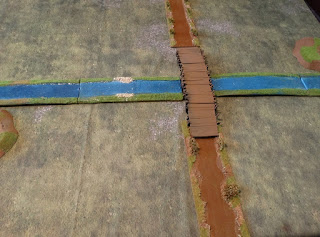 Alan won the imitative (all captains were rated 7) but failed to get any of his 3 brigades to move. I managed to get 2 of my brigades onto the table and my dragoons raced to the bridge and dismounted ready to fire at any one coming from Alan’s side. 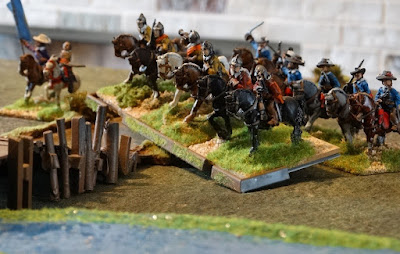 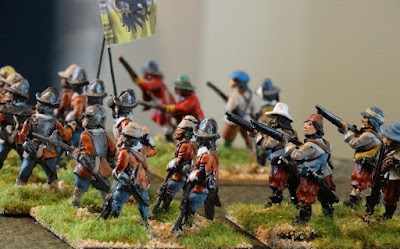 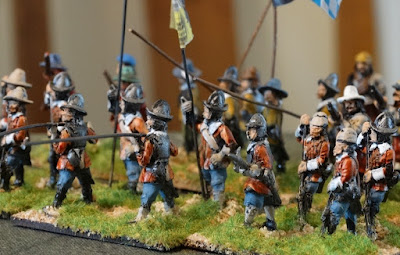 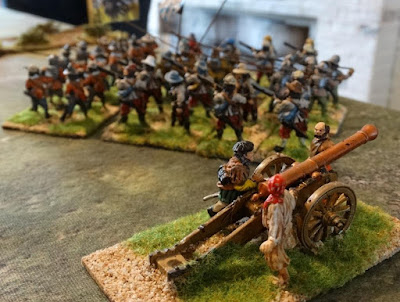 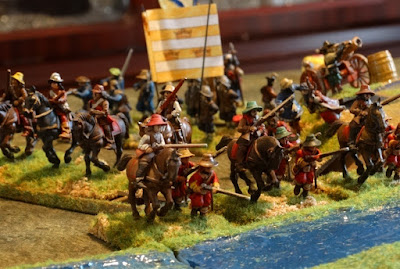 He ordered his Swedish Cuirassiers to gallop over the bridge 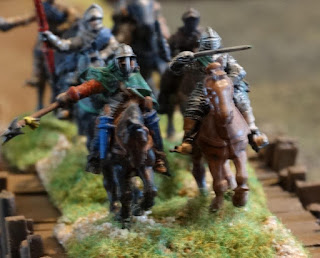 They smashed into my dismounted dragoons who fired and then evaded. 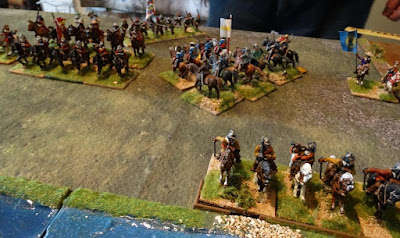 Since the Cuirassiers had outstripped their officer and troops they found themselves losing the melee because my troops were supported and they were alone. They had taken a casualty from my artillery when they crossed the bridge. The Cuirassiers fell back to the centre of the bridge. 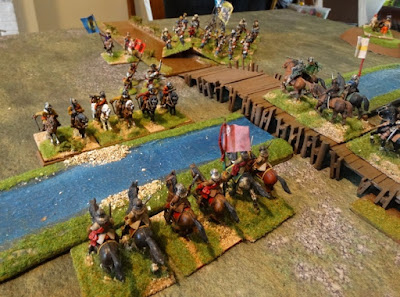 My artillery forced them off the bridge and Alan's artillery did damage to my German troops enfilading the brigade and breaking one of the regiments. 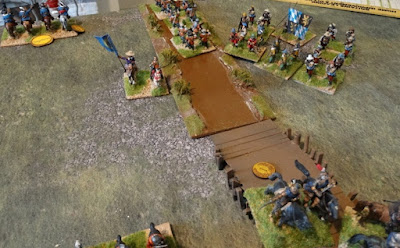 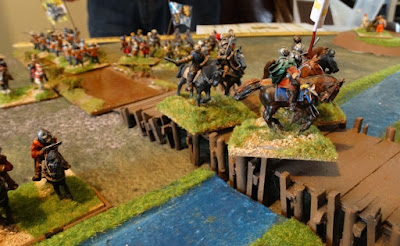 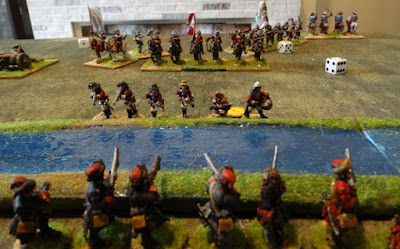 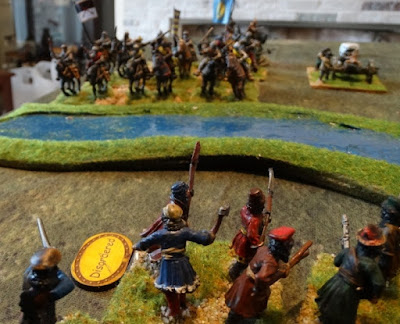 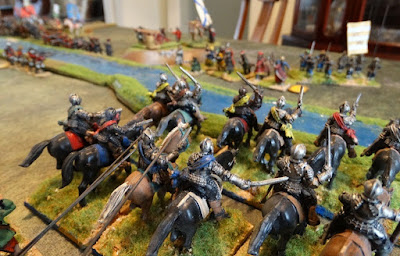 I had positioned my gun on a hill within medium range and nothing could come across without taking casualties. No units could cross the river at any other point, and everyone was reduced to firing across the river at their enemies. Individual regiments took casualties but since they could not cross the river they had no real effect. Except for Alan's units of peasant's who having stood and taken three rounds of fire eventually failed a moralke test and broke. 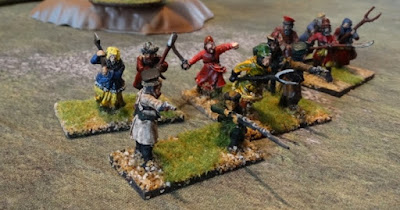 The object of the game was took take and hold the bridge and with no other way to cross the river the game became bogged down. Alan tried to take the bridge by attacking with his pikes 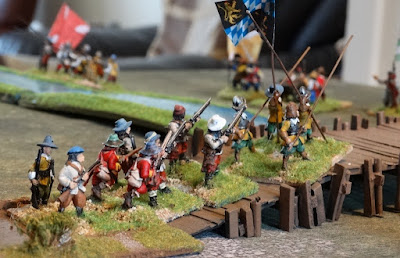 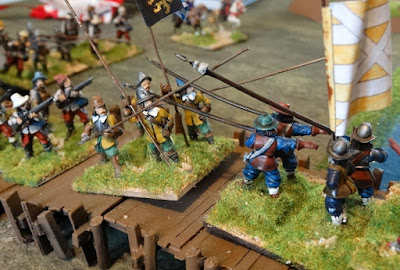 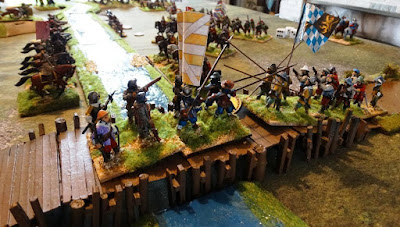 It was at this point we decided that the game had come to an end. The rules worked but the scenario was poorly designed. With the bridge the only method of crossing the river and my gun covering it, there was no chance of Alan taking the bridge.

The 28mm figures for this game were Bob's Irregular Miniatures ECW figures, to which he added Warlord’s TYW range. All the  ECW figures, about 300 of them, were based for an excellent set of 18th century rules King of the Battlefield.  These used 3 bases for an infantry regt or a cavalry unit. I use 3 x 4 infantry and 3 x 2 Cavalry. This game used P&S rules which uses bases and does not care how many figures are on a base.

Most units have oversized flags – the Swedish and German flags are enough to change the ECW figures into the two TYW armies. There are odd conversions such as the leading Cuirassier charging across the bridge who has a cape made from a cigarette paper covered in polystyrene glue added. Perhaps more interesting are the gun crew – one is a pirate, another a Border Reiver and the last a Celt! They seem to work and neither Jack or I has ever commented on them (might notice now).

The militia whom Bob successfully drove off the field are the Perry’s Russian Napoleonic peasants. The first set of 6 have hand weapons and the second 6 captured firearms. The only figure that doesn’t fit with the 17th century is the officer who wears a Potemkin, Bob also uses the peasants with my Napoleonic Russians.
Posted by ABC Wargammers at 17:08