54mm Russians and Turks fight it out

Bob and I finally got around to playing the 54mm Russians and Turks game.  We got a bit stuck on what rules to use as we didn't think the normal 'wargame rules' designed for smaller scale figures quite fitted with the idea of 54mm toy soldiers.  The opening positions and more pictures are in the other 54mm figure article on this blog

We had had a fun game using Bob the Painter's very simple Crimea War rules when we used in the 25mm Minfig S range game and thought we would try them.

Having decided this the opening moves were made.  As with so many of my games recently, it started with an inspection of the table by the Ginger beast (the cat, not Bob). at least he didn't knock anything over. 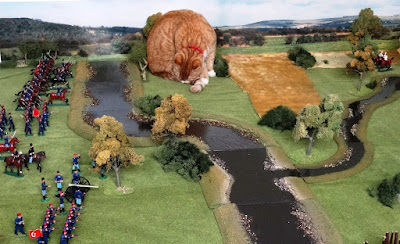 Bob arrived and launched a general advance with his Turks. 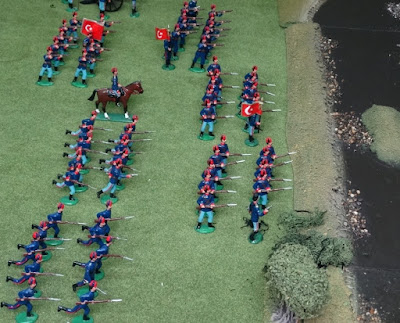 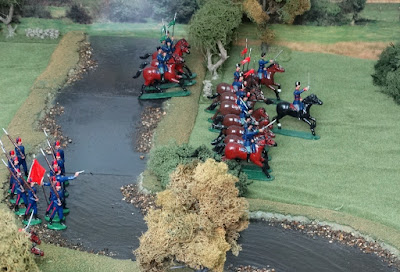 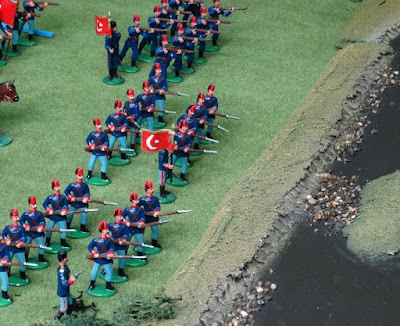 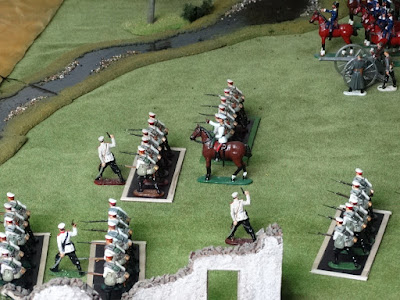 I moved forward my Russian reserves in response. 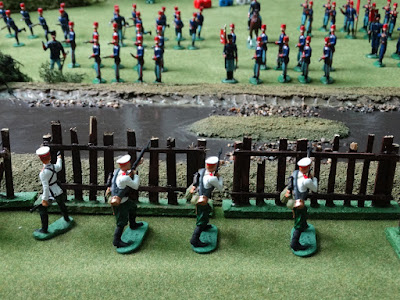 My riflemen prepared to meet the enemy. 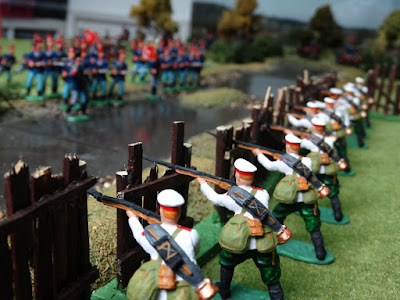 I advanced my cavalry to counter the Turkish cavalry 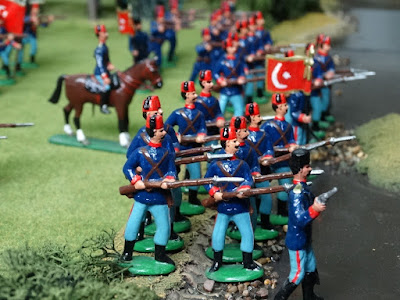 The Turkish infantry continued their advance and opened fire with devasting effects. The odds of hitting anything at long range with these rules is low, but Bob managed to score high with each unit.  My lovely figures toppled.  But they fired back... and missed to a man!! 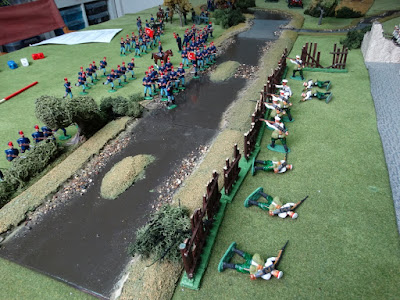 They then failed a morale test and ran.  A portent of what was to come. 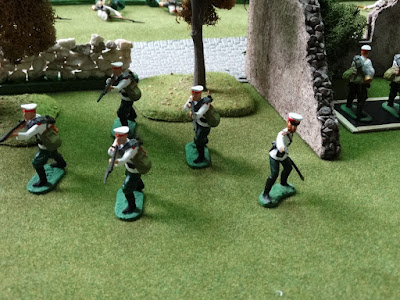 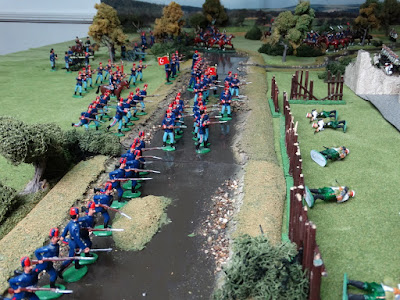 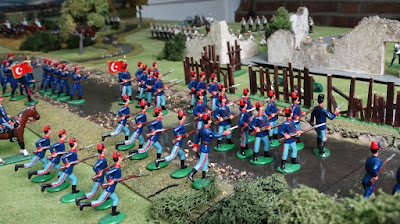 The Turkish infantry having cleared my front line moved on. 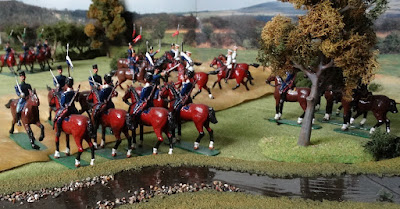 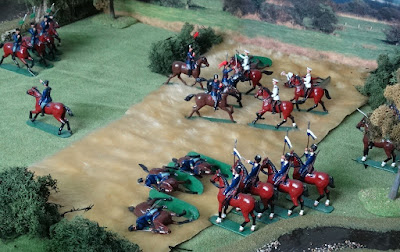 The Turks failed against my Russian cavalry and a unit was put to rout. 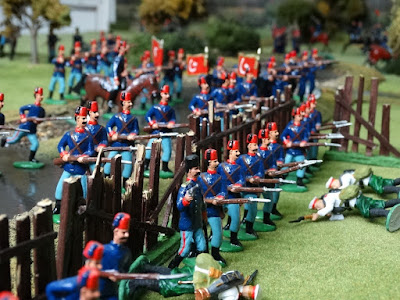 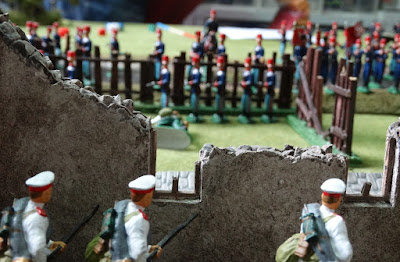 Meanwhile the mass of the Turks closed in on my troops.  This had a bit of a feel of the Alamo about it as my small force faced overwheming odds. 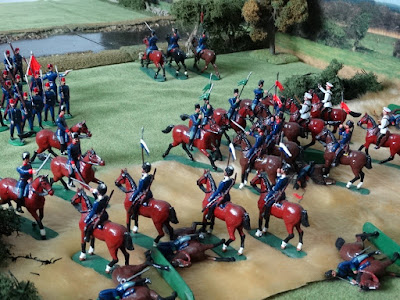 On the flank the cavalry engagement grew as Bob threw in more cavalry supported by a regiment of infantry. 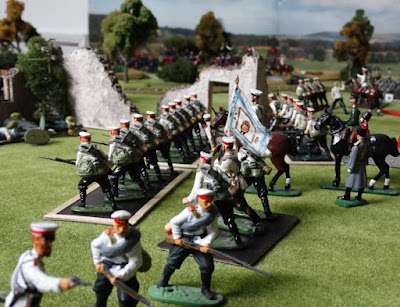 Yet again I saw my infantry fall and run,  The Tsar himself led forward the last of my reserves.  Surely this time I would hit something! 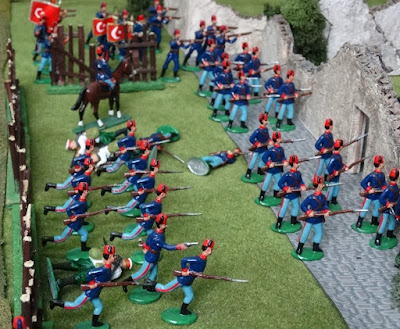 The Turks pushed foward.  Notice the one dead Turk. Such good shooting on my part! 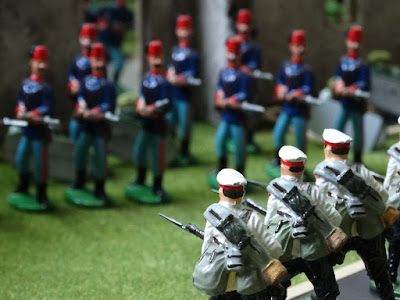 'Wait until you can see the whites of their eyes'! 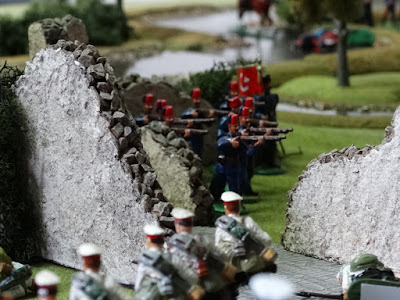 Meanwhile the Turks start to outflank my forces. 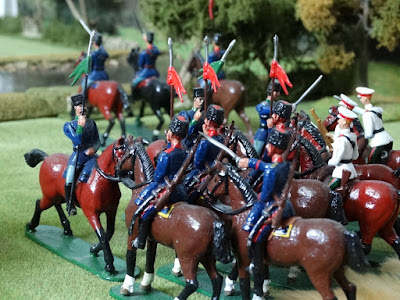 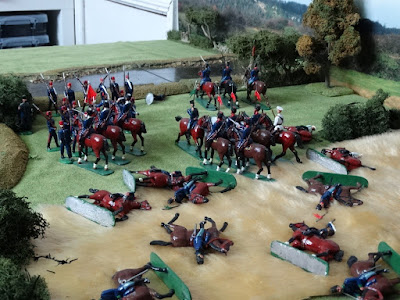 My cavalry charge the infantry and miraclously survive a poor volley and plunge home. 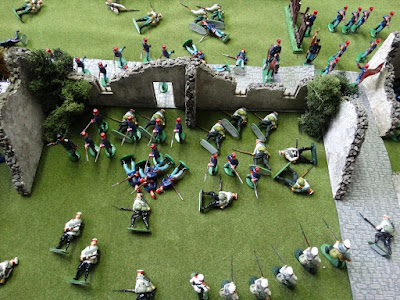 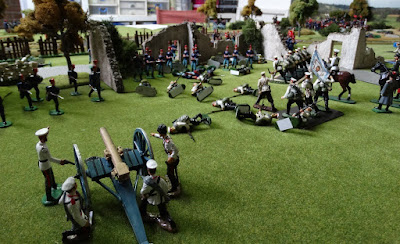 Yet again I lost out in the fire fight but surely at this range my artillery will blow away the advancing Turks? 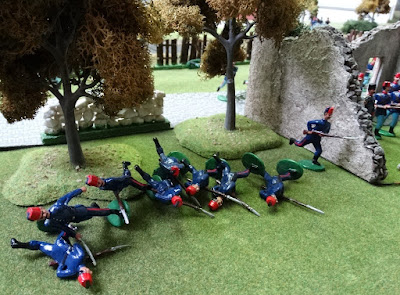 An entire unit of Turks fall over laughing in the domino effect at the pathetic effect of my artillery which registers 1 hit! 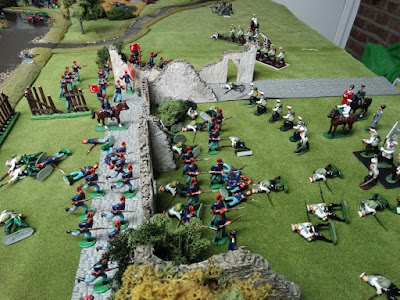 .With more Turks pouring into the village and Bob's artillery hitting my troops on the flank I conceded defeat. 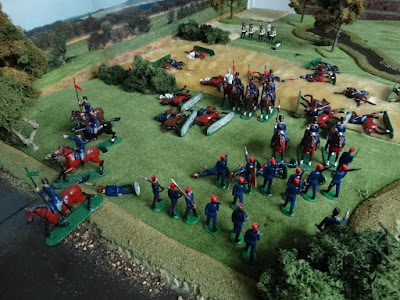 Our first game with 54mm figures in a very long time and apart from the domino effect of figures knocking one another over it was good fun.  The rules sort of worked, forgot that cover only affects morale but we both enjoyed it and my cavalry at least scored some successes.
Posted by ABC Wargammers at 14:58