Some extracts of the aftermath of Waterloo written in 1817

About 25 years ago or so I bought 2 volumes of the History of the Wars from a second hand book shop in the Charing Cross Road in London.  The spines were in a poor state and the covers were detached on both volumes.  But they were printed in 1817 and contained amongst a host of other things, first-hand accounts of the Battle of Waterloo and unusually, the aftermath. 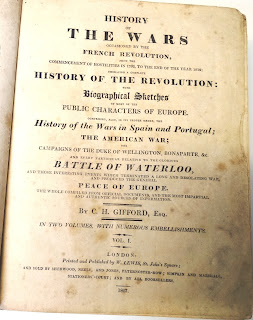 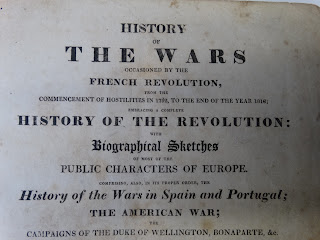 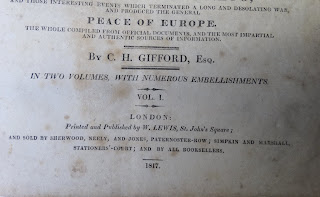 I promised myself that I would get them bound and repaired and they sat on the self and I would open them to get information on naval engagements were I would find ships names, captains and number of guns and crew.

Finally, even though I have the big ‘C’ I decided to get them bound as a last Christmas present to myself.  I managed to find a bookbinder in a small town outside of London who wasn’t going to bankrupt me for repairing the books and was enthusiastic to work on them.

I now have them back and thought I would share some extracts of the aftermath of Waterloo which perhaps we are inclined to overlook. 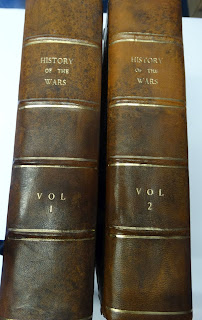 Although these are accounts of Waterloo they probably hold true for many of the battles of the early 19th century where warfare involved large numbers of troops.  These are just a few of the many descriptions.  The numbers may or may not be right but again come straight from the books.

‘The field of battle the next morning presented a most melancholy sight.  About 45,000 dead all of whom had been stripped naked and perhaps the same number of wounded whom as yet it had been impossible to remove lay crowed in a narrow space.  Near 25,000 horses, dead or wounded lay mixed with their former riders and increased the horrors of the scene.  It was not so much the ghastly wounds which had deprived them of life which disfigured them their mangled remains.  But these had been further trampled by the cavalry, crushed by the artillery and torn to pieces by the continued showers of bullets vomited forth over the positions.  The number of dead upon the field of battle, said an eye witness could not be numbered.  It presented on the 19th, said one who saw it, a spectacle like an army asleep.’

‘For many days several thousand carriages, and many peasants from the surrounding countryside, even as far as Mons, were employed in burning or burying the dead.  The task was not only loathsome, but dangerous and the Prussians were absolutely forced to compel them at the point of the bayonet.  To avoid infection from the corrupting remains, the peasants first dug large pits, and then, by means of large hooks, dragged the bodies into them.  The country for several miles, presented the appearance of one continued large groups of hillocks, so thickly was its surface covered with large graves in which hundreds of bodies of men and horses were thrown together. In one acre of ground a beholder counted 40 graves thus filled with dead’.

‘The weather having become dry after the burial, the wet mould, which had not been thrown over them to sufficient depth cracked from the heat, and opening , shewed, in  some places their ghastly remains.’

‘Notwithstanding the burning and burying, the smell from their putrid carcasses was insufferable and a pestilential gale continued to be wafted over the surrounding countryside from this theatre of death.  For many days the number of carrion flies which fed on the dead bodies was dreadful and most annoying to those who visited the spot.’

‘It is said that some soldiers absolutely lost their reason from the remembrance of the dreadful scene’ (an early account of PTSD?)

At Houghmont every tree in the wood seemed as if blighted and were pieced with cannon-bullets.  Some were pierced with 20.  The branches were broken off and destroyed. Immense graves and dreadful heaps of ashes, the remains of burnt bodies, marked the fatal spot.  Broken swords, helmets, torn epaulets and sabre sashes, bathed in blood shewed how furious and destructive the battle had been here.  Mixed with these were seen the flaring red poppy, rearing its head among the fresh dug mould’.....’Soldiers caps, pierced with many a ball helmets, cuirasses, tattered clothes, cartouche boxes, military decorations, crosses of the legion honour.  French novels, German testaments, packets of cards, letters from lovers to the object of their affection, from parents to their children mangled bodies, legs, heads in helmets intended to protect them, and arms strewed in fearful confusion lay along these bloody fields’

The book also contains many letters and extracts from British Officers recounting their recollections of the battle.  Interestingly amongst these is the extract from a letter from Serjeant* Ewart of the Scots Greys who took the French Eagle. (*not a typo, the way it is spelt in the book)

‘The enemy began forming their line of battle about nine in the morning of the 18th: we did not commence till ten.  I think it was almost eleven when we were ready to receive them.  They began upon our right  with the most tremendous firing that ever was heard, and I can assure you, they got it as bad as they gave it: then it came down to the left, where they were received by our brave Highlanders.  No men could ever behave better: our brigade of cavalry covered them. Owing to a column of foreign troops giving way , our brigade was forced to advance to support our brave fellows and which we certainly did in style; we charged through two columns each about 5,000; it was on the first charge that I took the eagle from the enemy; he and I had a hard contest for it; he thrust for my groin – I parried it off and cut him through the head; after which I was attacked by one of their lancers, who threw his lance at me, but missed the mark, by my throwing it off with my sword by my right side; then I cut him from the chin upwards, which went through his teeth; next I was attacked by a foot soldier, who, after firing  charged me with is bayonet – but he very soon lost the combat, for I parried it and cut him down through the head; so that I finished the contest for the eagle.  After which I presumed to follow my comrades, eagle and all but was stopped by the general saying to me “You brave fellow, take that to the rear: you have done enough until you get quit of it:” which I was obliged to do but with great reluctance.  I retired to the height and stood there for upwards of an hour, which gave a general view of the field, but I cannot express the horrors I beheld; the bodies of my brave comrades were lying so thick upon the field that it was scarcely possible to pass and horses innumerable.  I took the eagle into Brussels amidst the acclamation of thousands that saw it’.

There are also accounts from Prussian Spanish and other observers at the battle as well of course of descriptions from both the British and French sides.  But these two volumes contain so much more in their densely packed text, the Battle of New Orleans; Nelson’s great naval battles as well as many more much smaller but important naval engagements; and the campaigns in Portugal and Spain.  My only question to myself is why didn’t I get them rebound and repaired years ago?