As I suggested in my previous post, the additional Japanese forces made the defences look at bit too strong.  We therefore decided that 2 units should form a reserve and I diced for what move they would come on – luckily it turned out to be move 3.  Bob also rearranged the Russian cavalry splitting them and pacing regular and Cossack cavalry on each wing.

Given my defensive position it was down to Bob to take the initiative.  He diced for brigade after brigade of Russian infantry and cavalry and not a single unit moved!  Only 2 moves left until my reserves arrived!  His artillery and machine gunners had a bit more like but fortunately I managed to save every hit. 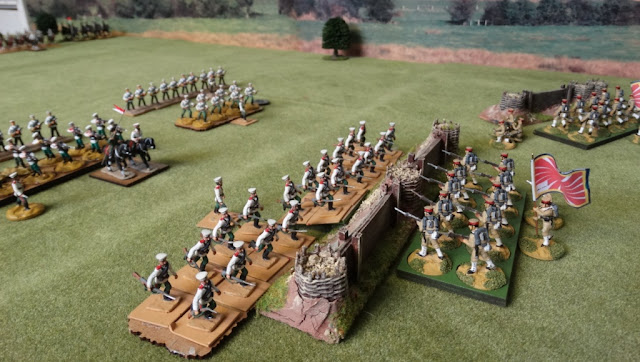 This is one of the odd rules in Black Powder.  But we lived with it.  The Russian cavalry on this flank also decided to hang around and not move!  Again the Russian artillery struck, this time hitting one of the Japanese units and forcing them to retire as part of a Break Test and leaving a section of earthworks undefended.  Fortunately, no Russian infantry were close enough to take advantage of this momentary success.

The Japanese troops opened fire even with a First Fire bonus they were very ineffective and to cap things off the Japanese machine gun on the left flank jammed! On the Japanese right flank closing fire and a heavy skirmish with a large Russian unit saw draw after draw in the skirmishes but the Japanese kept witling away and the Russians were eventually forced to take a Break Test which they failed badly and were destroyed.

A similar outcome occurred in the neighbouring earthworks with another Russian unit broken. 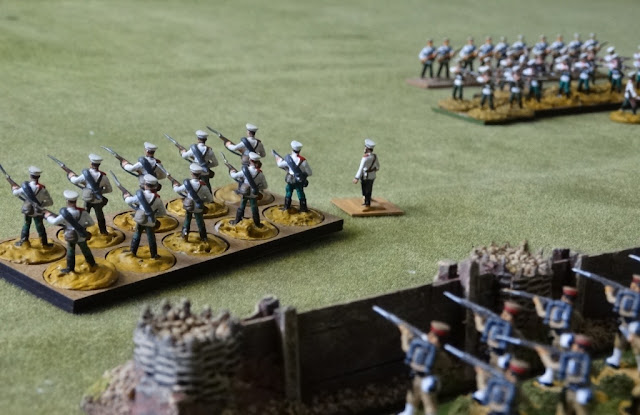 It wasn’t all going my way as the machine gun on the right flank also jammed.  I managed to un-jam it with a D6 only for it to immediately jam again on a D1!!

Another Russian unit on the left flank was hit by artillery and forced to take a Break Test forcing it to fall back.  This left 2 Russian Units who in turn charge the earthworks.  This time despite some initial resistance the already weaken Japanese unit was forced to retire and their accompanying machine gunners cut down. 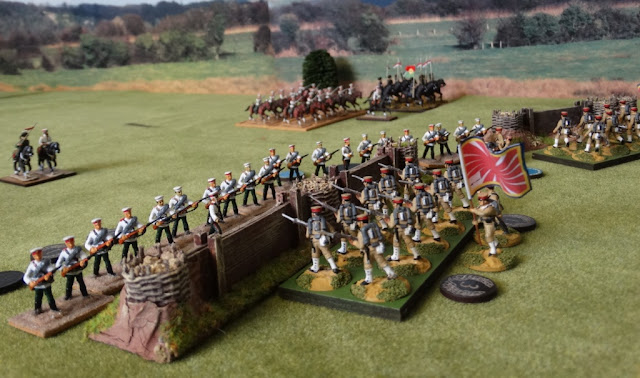 However, all this had taken time and my infantry reserves arrived one regiment went to bolster the earthworks on the left and the other turned its attention to the right and the Russians who had made it over the earthworks.  The Japanese unit forced from the trenches rallied and returned to the front line. 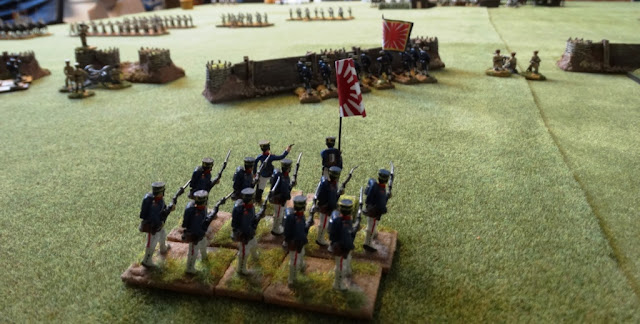 Things were looking a bit better.  One of the successful Russian regiments was routed in a subsequent melee and the other facing fresh troops decided to voluntarily retire covered by the Russian cavalry. 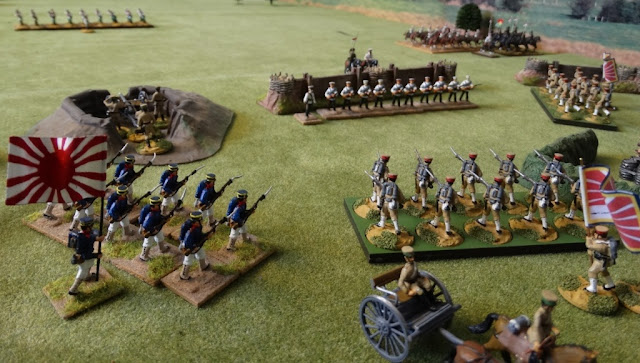 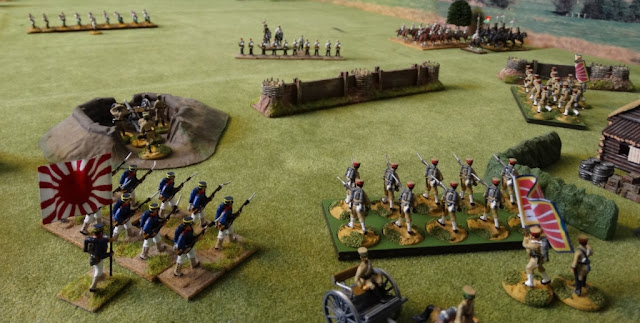 What I can hear you wonder was happening on the Russian tight flank?  Frankly
nothing!  After an initial rush across the battlefield they came to a staggering halt and just exchanged fire with the Japanese.  Neither side causing any significant casualties.  The Russian machine guns which had been successful jammed on the same turn and the Russian gunners suddenly gave up on the idea of hitting anything.

Lessons learnt.  Even allowing for 2 Japanese units to come on as Reserves, the Japanese were too strong behind their earthworks.  We should have allowed the Russians to have recycled the units that were destroyed once from the starting line to increase the number their numbers.  With good command rolls they could have made a difference. We need to look at the Rally to Me orders in the Rules to see if whole brigades could be encouraged to move forward rather than hang about.  An attack on the earthworks by the 4 units on the Russian right might have made it awkward given the jammed machine guns and the lack of Japanese troops.  I only 2 units of infantry and 2 of cavalry until the Reserves arrived.

I re-based the little command group on a round base as the original square base looked a bit cramped. 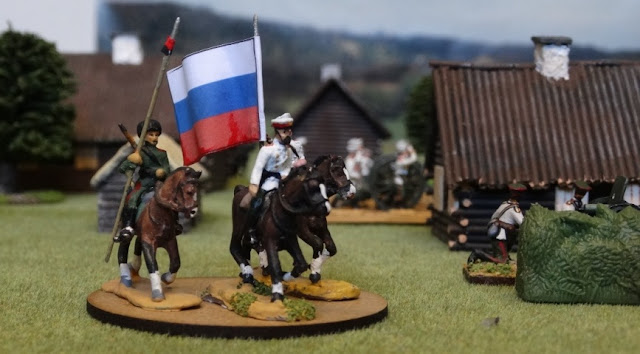 There is no Russian General so I used the British Mounted Naval Officer who sports a rather fine beard and cut away the lapels on his jacket.  The standard bearer is the Russian lancer and the Cossack has his lance arm bent upwards to have a raised lance.

Jack painted most of the Russian Infantry back in the day and all the Japanese infantry, gunners and cavalry in Khaki.  He scratch built the Russian buildings (with the exception of a couple of 15mm resin buildings and the 20mm American Road Side Chapel) using cocktail sticks and foam board.  The earthworks are my handiwork and made from Rendera gabions, DAS air dry modelling clay and coffee stirers.

It was great to see these figures on the table after all these years and to try our first Russo- Japanese engagement.

Better still, these wonderful Jacklex figures are available again.  You can buy all the original ranges and new figures as well as download the ‘catalogue of figures’ from www.jacklexminiatures.com