1904 Jacklex Russians and Japanese Prepare for battle - at last!

For those of you who also look at our sister blog ‘All Things Jacklex’ you will already have heard of the saga of Jack’s Japanese Army.  Briefly, we have been looking for this army for the last 8 years or so.  I had been desperate to photograph it for the blog and to have a game with them fighting the Jacklex 1904 Russians.

The Japanese had been used against my Zvevda Samurai following the release of the film the The Last Samurai and then been reflagged as Mexican Federal troops to battle Jack’s 1916 Americans.  After which they simply disappeared.  The only conclusion was they were somewhere in the dark reaches of Jack’s loft.  Anyway,  Jack’s daughter decided that the conservatory where Jack now does all of his modelling and where we occasionally have a game, but almost always sit and have a coffee and a chat needed a good tidy up.  In his conservatory is a cabinet with his 54mm figures and underneath it and behind a pile of books she found the Japanese.  These had been literally inches and at best 4 feet away from us for all of the 8 years we had sat and discussed where they were!

I grabbed them and Jack's Russian Army and have set up our first ever 1904 Japanese v Russians game in the 20 odd years we have known Jack.  Originally the the Japanese were heavily outnumbered and whilst they have a number of machine guns, they were at a disadvantage, so I put them behind earthworks.  However, with the help of Mark Lodge the new owner of Jacklex Miniatures who very kindly provide me with a painted unit and a couple of units of Blue coated Japanese I painted some years ago and a new unit painted with my doggy eyes.  I have managed to bump the Japanese infantry up from 3 units to 7.  The Russians have 10 although 4 of them are 'large units' for our in house version of Black Powder with all the firing and fighting bonuses that come with it.  So the Japanese may be a little too safe now behind their earthworks.  They are however heavily outnumbered by the Russian cavalry.  There may have to be a couple of minor changes before the games starts.  We shall see.

Next week or so is a bit manic with a cataract operation and then a trip to the Oncologist to check on the cancer and the week after I am going on a family holiday to Portugal. I still hope to be able to meet Bob for a game before then, but just in case,  I thought I would wet the appetite by showing the game in its starting position and some of the units. 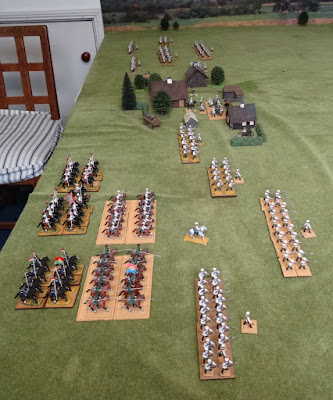 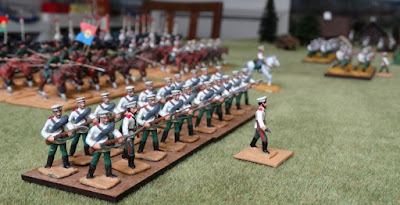 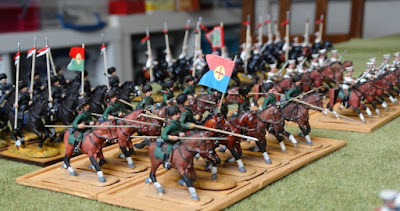 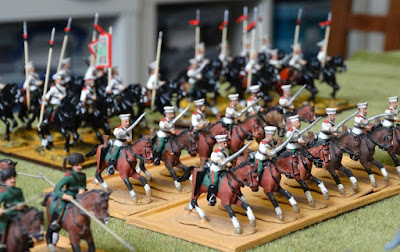 The Russian centre and artillery 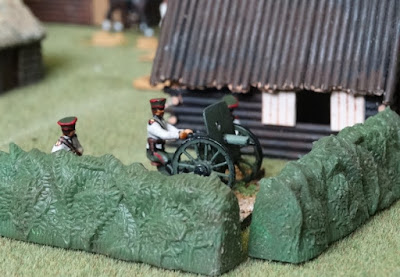 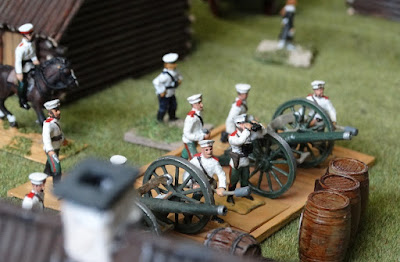 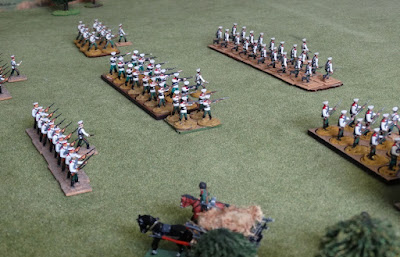 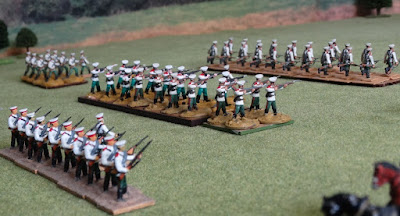 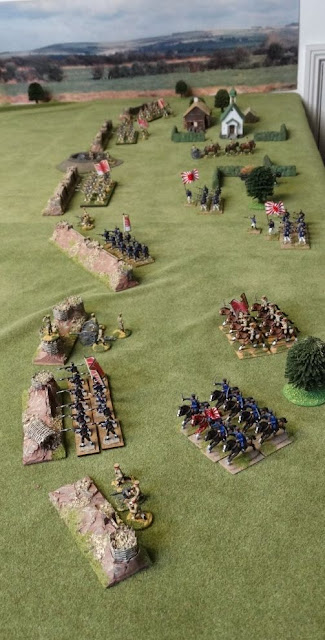 Right wing:
held by cavalry; artillery; a machine gun and hastily raised units of Japanese in their blue uniforms. 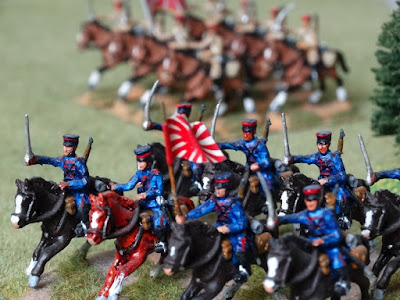 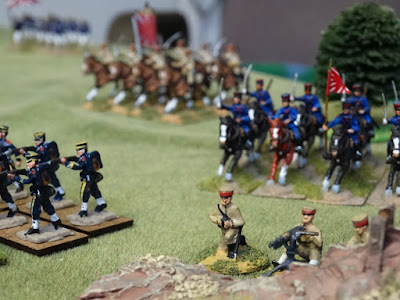 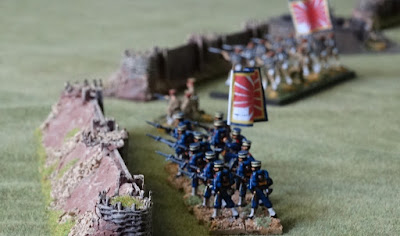 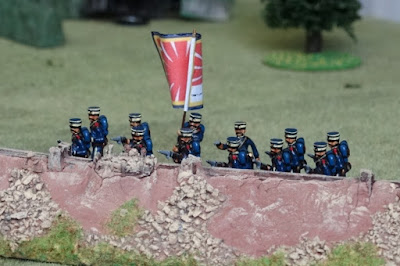 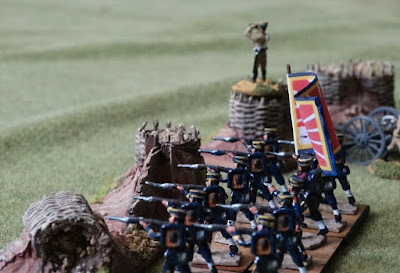 Japanese centre:
held by infantry and entrenched gun and machine gun.  The Bellona gun position is almost as old as the figures! 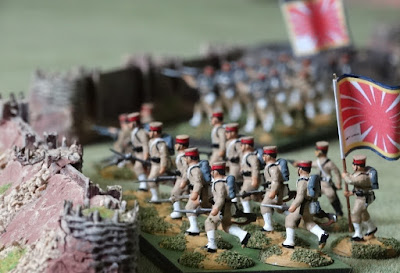 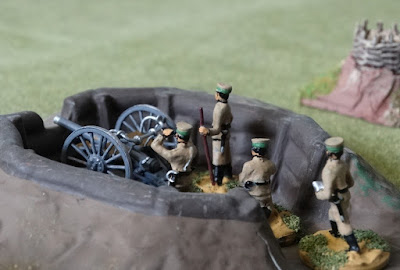 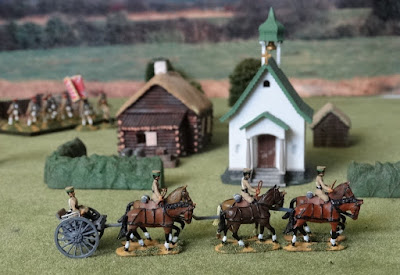 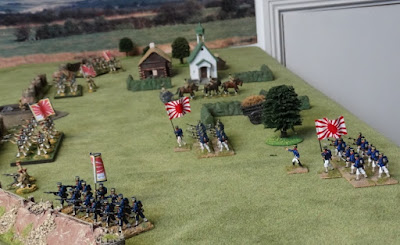 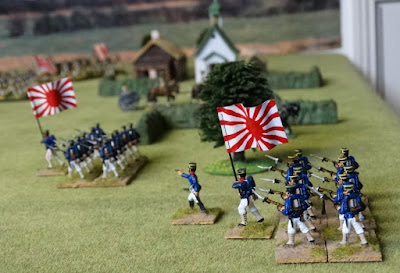 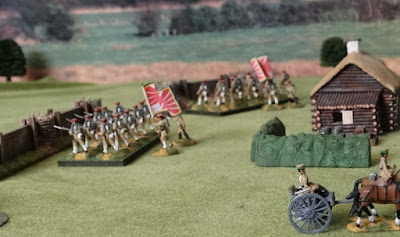 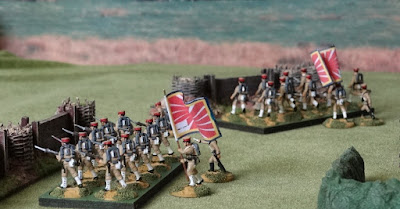