Bob decided to make two small ECW armies using the classic wargame regimental organisation of 2 of horse, 4 of foot and a gun which seems to be the norm when we first started gamming over 40 years ago.  This would keep both the number of figures under control and didn’t involve too much painting before we could get to grips with the figures.

Bob’s wargame room is his garage and in the winter it is off limits despite the electric heater.  So he went for 15mm which would enable us to play games on his smaller dining room table as well as on his larger table in the warmer periods.

He chose the 15mm ECW Gallia Range from Warrior Miniatures.  Individual figures can be purchased and the range of figures is extensive.  Equally importantly, at 21p per figure (42p for a cavalry man as the horse and rider are separate) they represent some of the least expensive 15mm figures on the market.  If a project fails to take off (as can so often happens) or leads up a blind alley, the outlay is modest.

I offered to help Bob paint some of the figures.   Not having seen the figures before and having read references on TMP to these figures being 20-30 years old and the price being so low, I wasn’t quite sure what to expect.  As you can see below the infantry, guns and gunners came as a very pleasant surprise.  They were both a joy and easy to paint.  The proportions are good and they are a true 15mm scale. 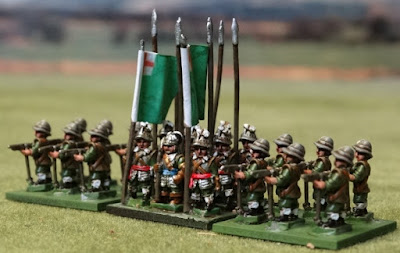 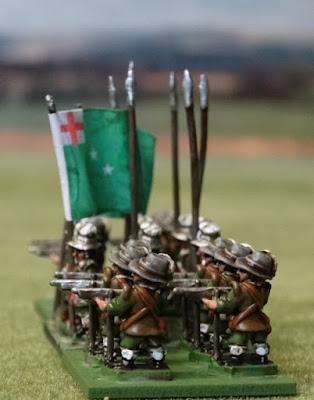 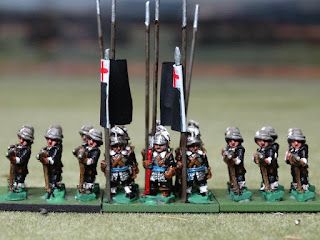 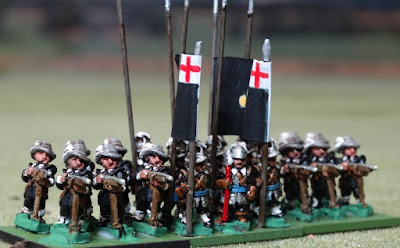 I am not so sure about the cavalry figure.  I have only painted the standing horse with a rider.  Separately they are okay but the rider sits too far back on the horse to look okay to my eye.  This is in part because the pistol holders get in the way.  After mulling this over and with Bob’s agreement I decided to slice a bit of the back of these pistol holder – sort of squaring the off at the back – this took literally a couple of seconds with a scalpel.  This meant that the rider sat forwards by a couple of millimetres improving the position and appearance of the figure.  There is a ‘trotting horse’ but I haven’t seen it so I don’t know whether it presents the same problem. 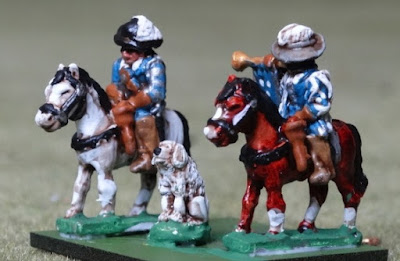 The range has a specific ECW Saker as well as a number of 16/17th century cannons and mortars.  You can purchase metal ‘flags’ for the infantry and cavalry figures but these need to be painted.  Bob opted for paper flags as this was easier.  They also do a very nice ‘Draught Oxen’ which I have painted up for my 15mm Ottoman army at 25p each, you can’t go wrong and they fit nicely with the Minifigs gunners. 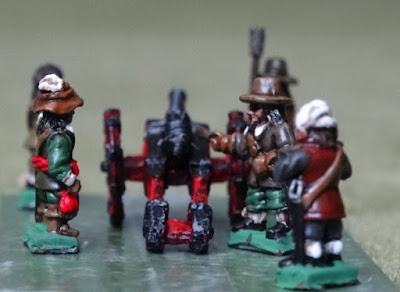 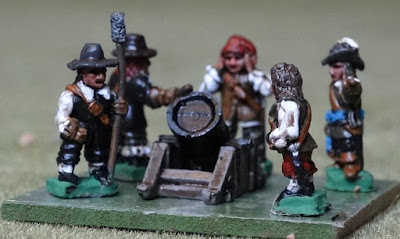 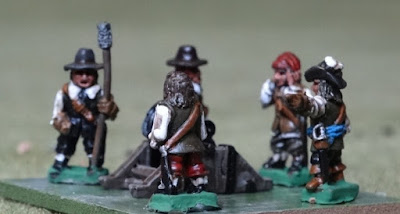 The guns and gunners are on temporary bases.  All the figures were undercoated with black spray paint.  I have painted one unit of infantry with the pikemen in 'blackened' armour - just sprayed them and painted sleeves etc and they look really good - saves even more time.  I oversprayed the gunners with Warpaint's British Armour which makes a good buff/green and again saves a lot of painting.  They are them painted with the Army Painter Strong Tone dip.  I then just highlight the white to give more contrast.
Posted by ABC Wargammers at 14:47