BP British and Zulus - Old Hinton Hunts and others take the field!!

About 40 years ago Bob painted a Zulu army which consists mostly of Hinton Hunt figures, together with Airfix natives from the Tarzan set (10 boxes worth!), and some S range Minifigs and British red coats – Hinton Hunt and Rose Miniatures, including a couple of nice conversions he did at the time.  These he passed to our mutual friend Stuart Asquith who in turn added some other figures.

Some 30 years ago they got passed to me and I added some Jacklex Zulus, together with some ESCI Zulu plastics.  In that time Bob and I have played with these figures once or twice I think, largely because we didn’t have any suitable and easy to follow rules.   We have ‘The Battle of Kambula 1879’ –Simple Wargame Rules for a demonstration game on 7th June 1975! –.and did try TSATF (I think) at some point.

However, we have been using the Black Powder rules recently and they have an example of a British and Zulu engagement so we thought we would give them a go.  So out the figures came from their boxes.  Over 300 Zulus and 50 British Redcoats, a unit Minifigs S range lancers and some Jacklex Boers as colonial troops and 4 mounted red coats as a unit of small unit dragoons, and a handmade 20mm Jacklex Japanese Field Gun (don’t ask why).

Bob commanded the Zulu forces and I took charge for the British.  I set the game up in my loft on my 6’ x 7’ table.  We used the rules from the book so to speak allowing full movement.  The Zulus had 16 regiments - 2 of 40 figs and 1 of 50 which were counted as large units there were 2 units of skirmishers with smoothbore muskets.   The left and right ‘horns’ came from villages at either end of the table with the Chest in the centre between the two. 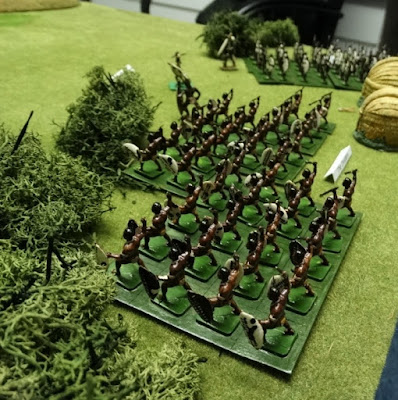 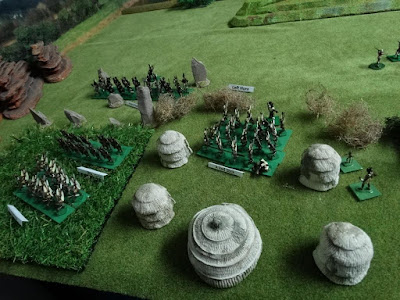 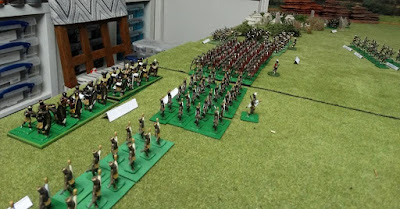 I set my infantry out in companies along the river bank with the aim of stopping the Zulus on the far bank.  One company was posted in a walled farmstead, there were a small unit of marksmen on an ‘island’ in the river and the colonial cavalry and the lancers protected the wings. 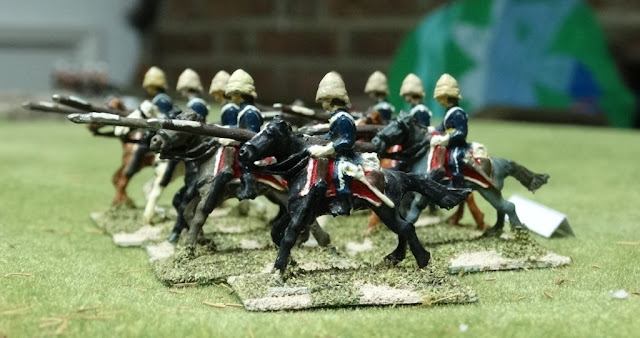 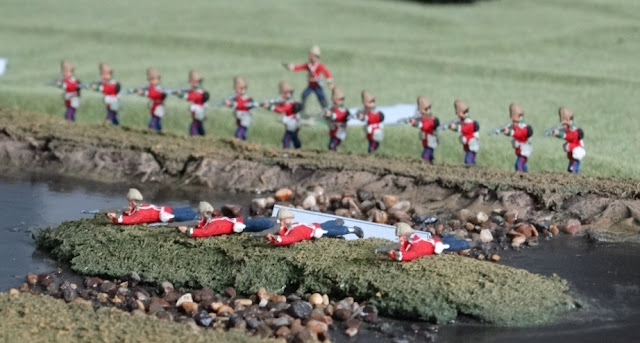 The Zulu’s commander was a veritable giant with a cigar and a top hat!  This is a plastic figure which must be at least 35 years old.  To look at him you would think it is an Airfix model because of the sculpting but he is a 25 mm figure.  Bob can’t remember where he came from. Anyone recognise the make? 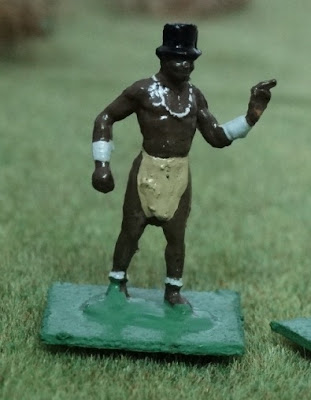 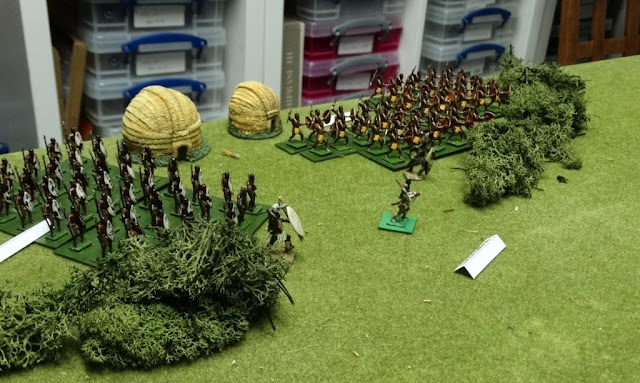 The Zulus had no idea of the tactics with the Chest moving 3 full moves towards the river which was fordable at all points. 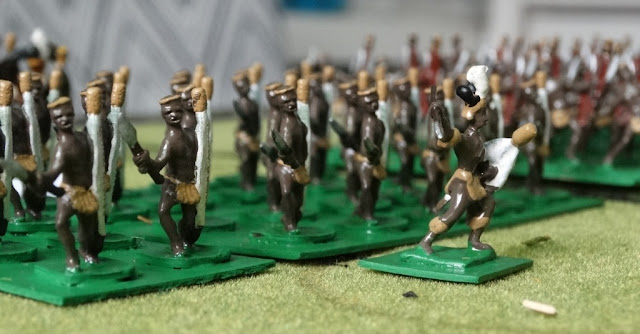 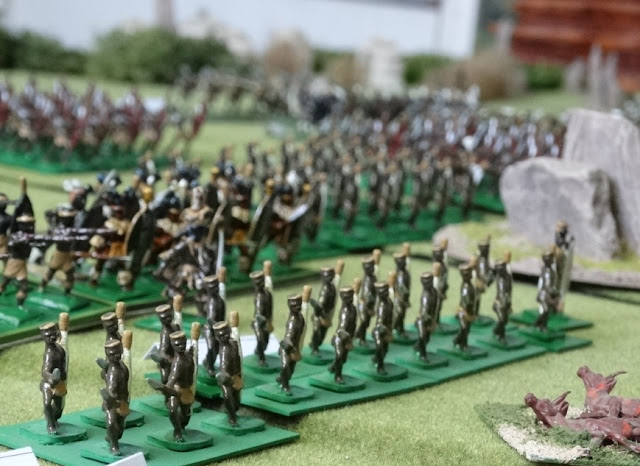 On the right things were as slow as on the left.  The Zulu riflemen advanced on both the left and right preparing to take up positions on the hills to support their advancing regiments. 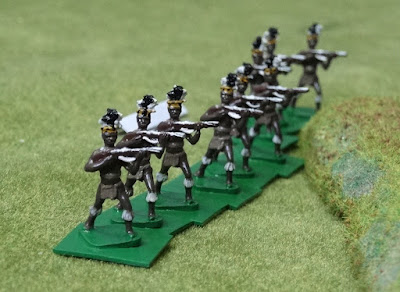 The Zulu advance was a lot quicker than I envisaged and my troops opened fire.  E company were clearly spooked by the advance and missed when firing at the two large units approaching them! 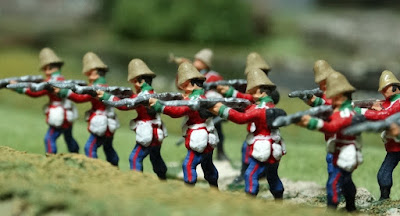 A couple of hits were registered by the other companies but the artillery failed to score a winning hit.  The next move saw the left and right horns stall but the centre moved forwards into the river. 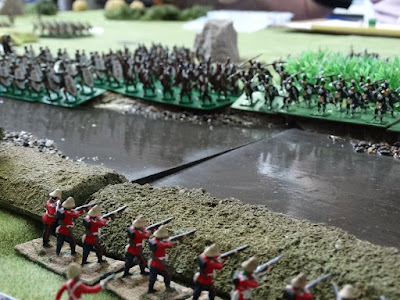 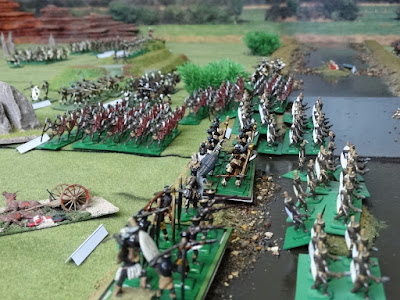 At the same time one of the Zulu rifle units reached the opposite bank of the river and opened fire!  Several birds flying high above ducked down for cover, but the British survived!

However, things were starting to get a little bit tight and I decided to call back the Frontier Light Horse, D Coy and the Sharpshooters to help bolster the centre.  The Frontier Light Horse had other ideas and stayed put, as did the Natal Native Unit who just stood and watched the unfolding Zulu advance.  B Coy fell slowly back towards the walled enclosure firing as they went

Bob’s  Zulus flooded forward neither the river nor my more accurate firing slowing them.  The Snake regiment, the largest unit on the table, swarmed around the walled farmstead, putting A coy and the British command under pressure. 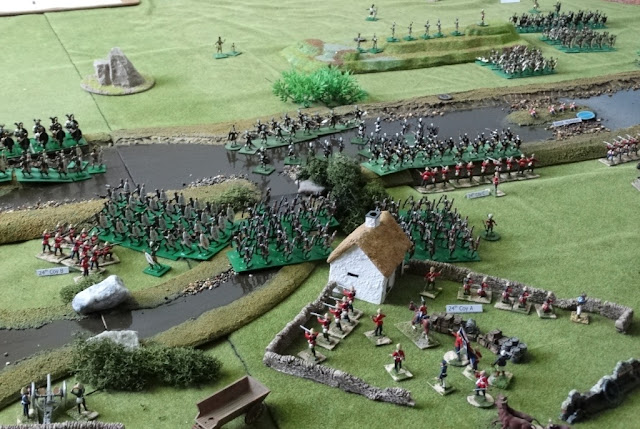 C coy found themselves cut off from headquarters and fighting for their lives. 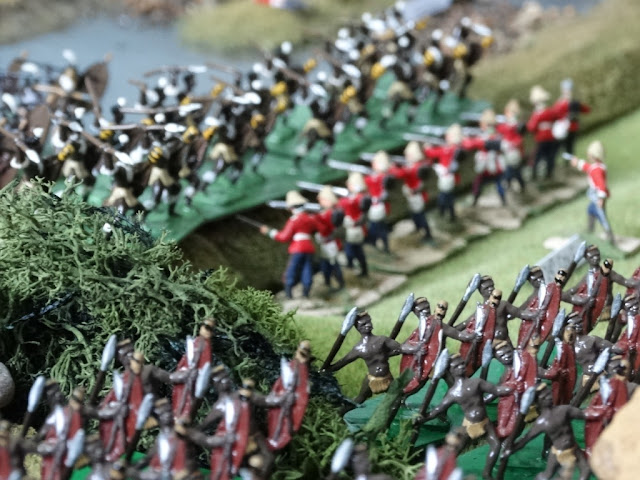 And still Zulu units came forwards.  Fortunately for me the rapid advance had slowed with the left and right horns still only advancing one move compared to the centre and providing some respite to pull troops back.  In a vain and heroic attempt to stall and throw back the Zulu right, the 17th lancers launched a charge on the Sharp Pointers who were wading up the river. 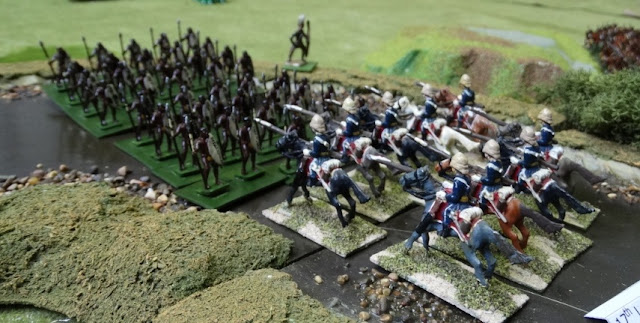 A whole series of melees ensued with the British offering closing fire before it was bayonet to spear.  The British firing had improved significantly and Zulu loses mounted.  The British artillery found itself without targets and readied itself to fire on any Zulus if the line broke. 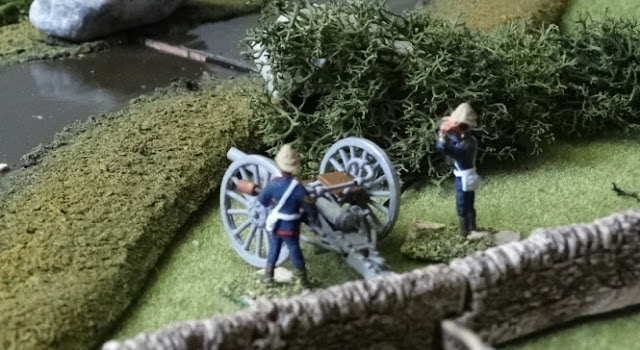 Coy B failed to stopped the Zulu’s Tree regiment who fell on them.  The British classification of ‘Steady’ enabled them to pass the first break test and hold the Zulus but they then crumbled and were destroyed. 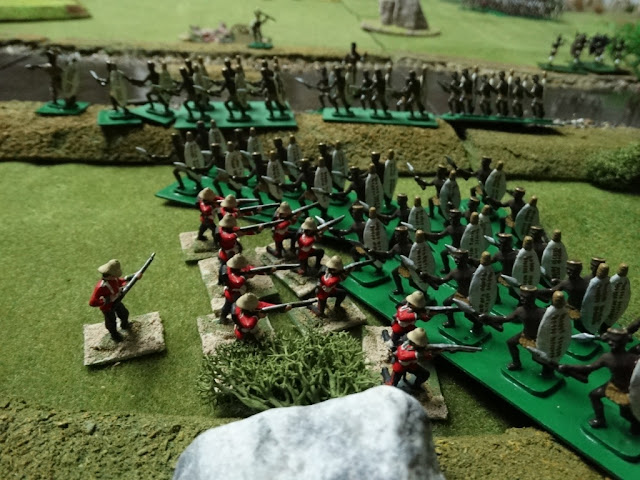 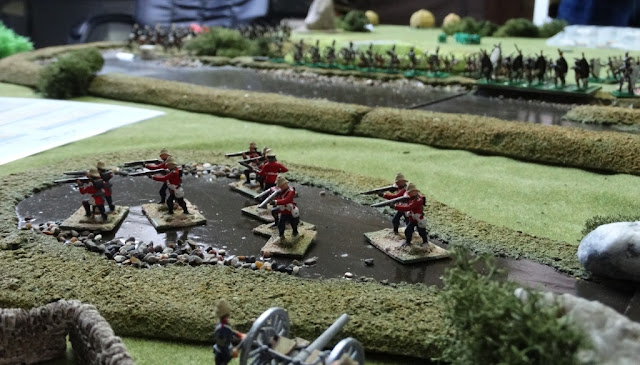 The Zulu sweeping advance caught the British gunners who were, cut down in a one sided fight 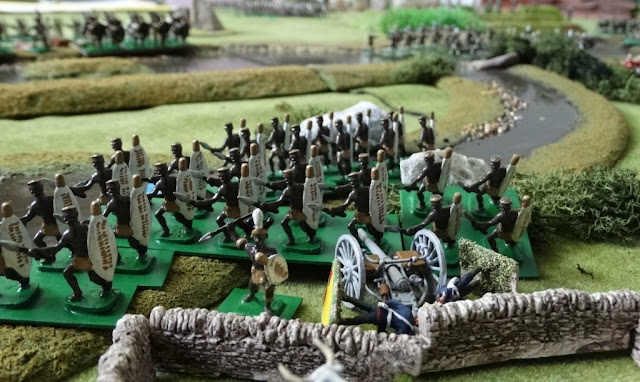 Things were not looking too good for my troops at this stage.  In the centre A coy somehow managed to hold off the Snake regiment - the  largest Zulu unit - being saved by their Steady status.  However,  on their left C Coy scored a stunning victory throwing back and breaking the Zulus to their front.  Capt Horatio Caruthers RN in a sheer piece of tactical thinking got three moves, wheeled D Coy and charged them into the flank of the Snake regiment.  This was enough to see the Zulus main force break and flee.  A coy was equally mauled and forced to retire. 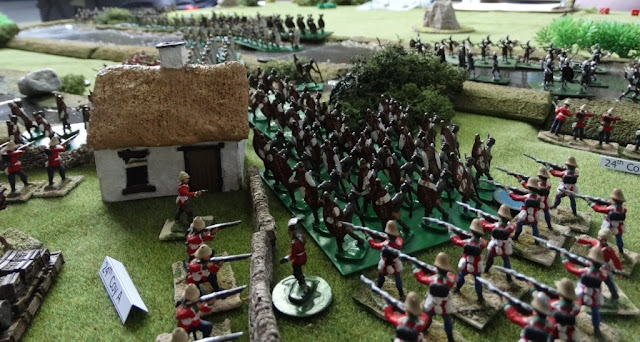 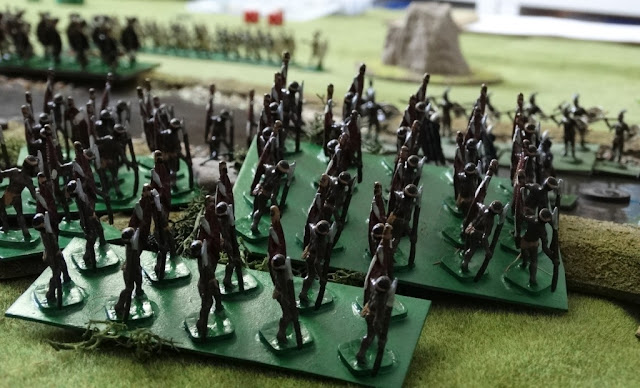 Again relief was only temporary as the Zulus flung in their best Regiment against the farmstead. Caruthers led his men into the farmstead to bolster the British defence. 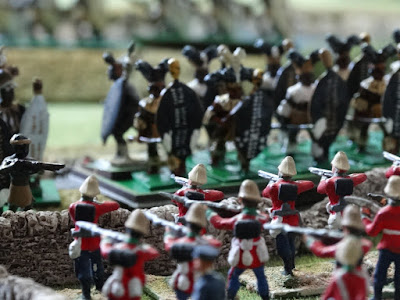 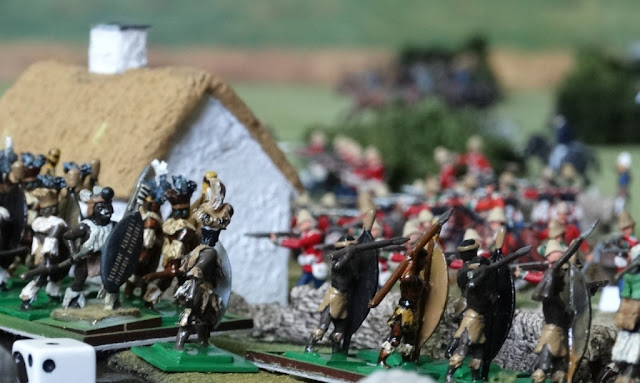 The Zulu Tree Regiment high on their destruction of B coy and the British gunners rushed forwards into the barrels of G Coy.  Good firing and even better saving dice saw them stand like oak trees and fall upon the British.  However, their accumulated casualties from the earlier engagements and those inflicted in this melee were finally too much and they broke and fled. 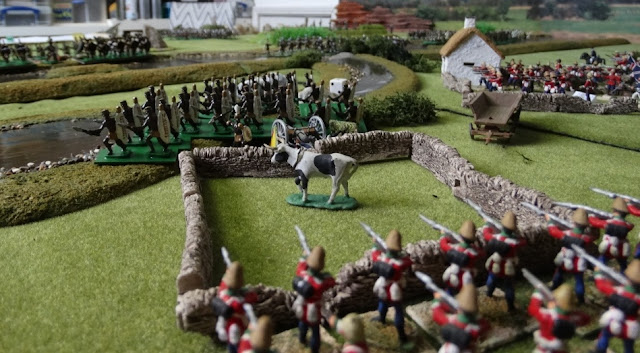 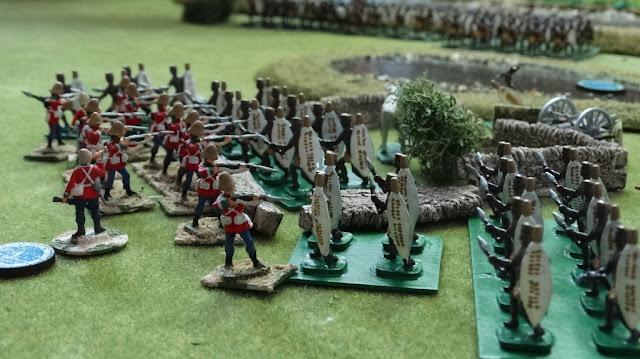 In a final twist the Zulu left and right horns eventually got moving. The Right Horn regiments managed a double 6 blunder another  6 gave them a charge move and a 3 saw them get 2 moves to the front bringing them across the river for the first time.

The remaining Zulu regiments in the centre found themselves under concentrated British rifle fire and retired.

At this point we decided that this was a least a first day win for the British, but enough of the Zulus regiments on the wings still remained intact thanks to their slow advance for there to be a substantial Zulu force available to be reorganised for a second days fighting.  The British meanwhile had seen one company and their gun and lancers destroyed and all the other companies taking some casualties or on the verge of breaking, but still there.

The BP rules worked fairly well and we had a good enjoyable game lasting a couple of hours.  Good fortune favoured the British because the Zulu command throws were a bit all over the place and Bob couldn’t bring all his forces to bear at the same time which might have been curtains for the British.  It was nice to see these old figures back on the table after so many years.  I noticed when cropping and enlarging the pictures that some paint is missing here and there, I hope you will forgive them and be proud that so much has remained in place!
Posted by ABC Wargammers at 16:07