The Battle of the Bridge a BP Napoleonic game

A game not involving S range figures for a change!  Went over to Bob’s for a game.  The scenario involved a race for a Bridge with the Russians aiming to destroy the bridge before the advancing French could take it.  The playing cards represent potential fords. This is based on an idea I found whilst trawling the net some years ago and I take no credit for it.

Bob commanded the Russians, whilst I took charge of the French.  The French outnumber their Russian opponents, but most are off table and need to move on down the road. 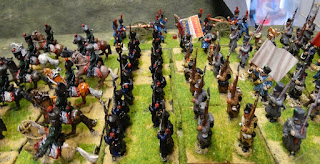 Bob won the initiative and moved his lancers down the road towards the bridge.

Then disaster befell the Russians, the Engineers who were following them failed to pass the command move, blocking the road to all the remainder of the Russian troops. 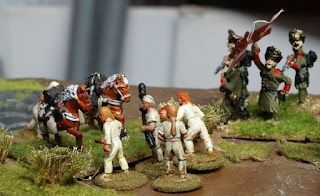 My forces by comparison all passed their tests and moved down the road.  My leading cavalry setting off in search of fords to cross the river. 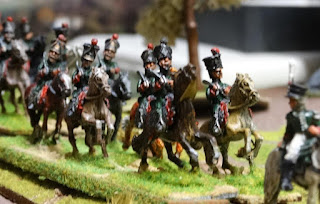 Again most of the Russian forces failed to move, the Engineers resolutely staying put.  One Russian regiment moved off the road to try to get around the blockage and the local peasants came out from the town to support their army.  The lancers again moved and Bob decided the only course of action was to move onto and over the bridge to protect it. 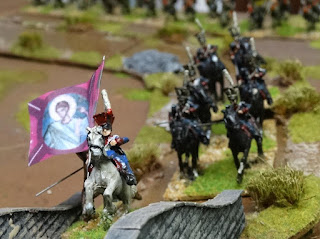 My cavalry found a ford 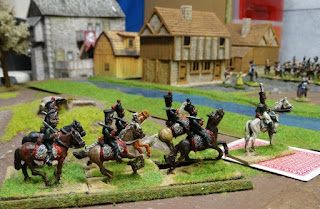 However, before I could cross Bob’s lancers crossed the bridge and prepared to charge! 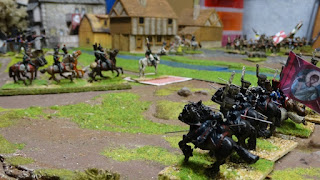 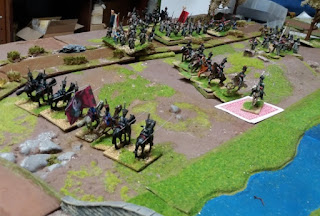 My leading infantry regiment immediately formed square, blocking all further movement onto the table for the time being 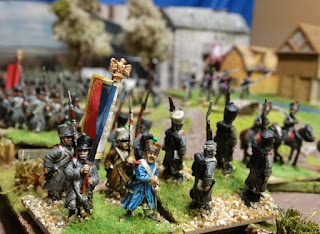 The lancers bravely charged and my chasseurs counter charged.  I have to say I thought it was all up for my cavalry. 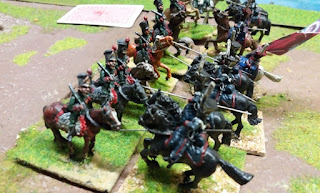 Thanks only to my supports, I managed to win the melee.  I do wonder about this rule on occasions.  The lancers took and then failed their command test and left the table. 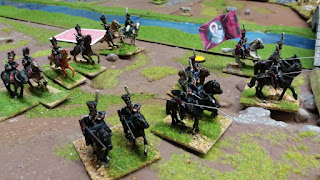 My infantry reformed from their square and the infantry ‘snake’ continued along the road - but very slowly. Although a group of skirmishers managed to cross the ford 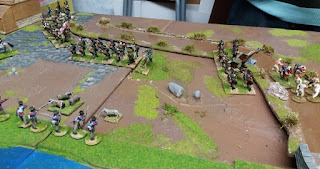 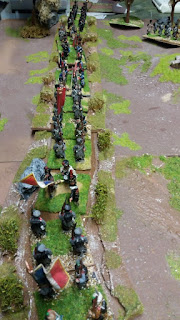 Meanwhile the Russians were still having all sorts of movement problems. The Russian artillery got stuck at the back of the line and despite attempts to fire often found its targets masked by its own troops.

My line on the road was simply becoming too long so one brigade took off across country to try tl reach the ford supported by an artillery unit which set up on a nearby hill to provide supporting fire and make the Russians life more miserable.

To a resounding cheer the Russian Engineers finally reached the bridge and started to lay their charges hopelessly late. 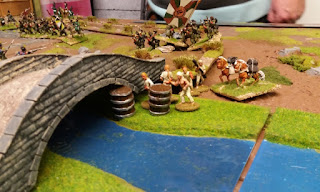 With the Russian infantry deploying to engage my infantry crossing the ford, the Engineers only found themselves supported by one regiment of infantry.  They were forced to abandon their efforts as my infantry swarmed onto the bridge. 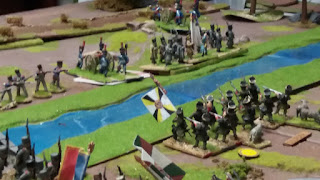 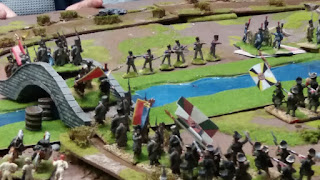 At the same time my other cavalry regiment started to cross at the second ford potentially outflanking the engineers and the Russian infantry.  The Russians were in a hopeless position but their guns finally had a target and managed to halt my infantry on the bridge. 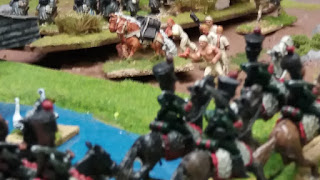 However it was clear that the Russians couldn’t fulfil their objective of destroying the bridge and retreated.

An interesting game spoilt in part by the Russian Engineers failing to respond to orders and blocking the road.  The fords were also too easily crossed we liked the system but have added a card which if turned means there was no ford.
Posted by ABC Wargammers at 16:09