I have been looking at my Prussian and Allied army and wondering what else to do with it other than fight the French.  There is always the mythical invasion of Britain but having pondered the idea I went off it.

That left me with 1866 and the Seven Weeks War, the Austro-Prussian War; the German Civil War, the German War of Unification or whatever title you prefer.

The Prussians are on one side with their allies some of the minor German states - Oldenburg, Mecklenberg and Brunswick being the most notable.  Whilst allying with Austria are most notably Hanover; Saxony;  Bavaria;  Wurttemburg;  Baden;  Hesse-Damstadt and Nassau.

I already have Bavarians and Wurttemburg troops in my FPW army and the uniforms are much the same in 1866 (except the Bavarians were wearing a flat cap), so without starting from scratch, I had the nucleus for both sides. It would also give me a chance to get some of the S range Saxon infantry.  These flat cap infantry strike me as being from the 1866 period, rather than the FPW.  They would also paint up for some of the other minor states who also had a similar style of uniform.

The biggest missing force were of course the Austrians. No S range figures and the Napoleonic Austrians aren't right.   Rather than produce an entire Austrian Army on its own, I decided to put together something akin to the 8th Federal Corps which included troops from Wurttenberg, Baden, Hesse Damstadt, Nassau and an Austrian Brigade and, in my case some Bavarian support.

So I set to work with my trusty scalpel and drill.

He has a greatcoat which looks similar to that worn by the Austrians.  He also has a havelock.  There is a picture of an Austrian Infantry figure wearing a shako and havelock in one of the Osprey books so a very, very simple conversion would be to just remove the plume on this figure and paint it.  However, I wasn't sure I wanted regiments of figures in havelocks.  I also think the charm of these figures is that all the poses and uniforms are the same, so rather than have the odd figure in a havelock in a regiment I discounted the whole idea.

This left me with make the task of removing the havelock and turning the plume into a 'trefoil' which gives a splash of bright green to the uniform.

Now this may all sound very complicated.  I can assure you it isn't.  Stage one squash the plume gently with a pair of pliers and you get a round disc.  With two cuts this can be made into a passable trefoil.  Cut away the havelock flaps and a little of the excess, then with the edge of the scalpel blade simply roll the figure against it turning any remaining havelock into hair coming from the Shako.  Any roughness or mistakes disappear in the painting. 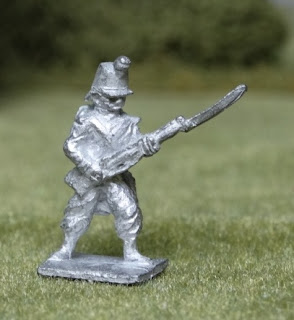 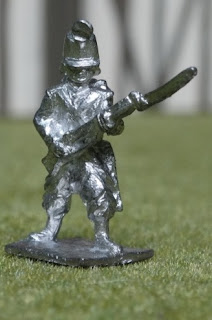 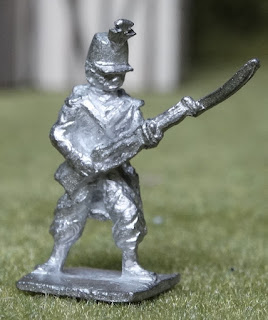 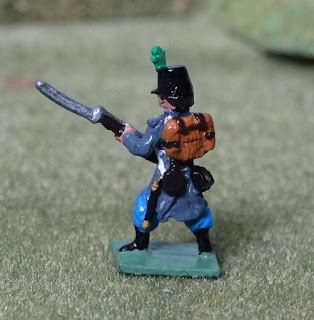 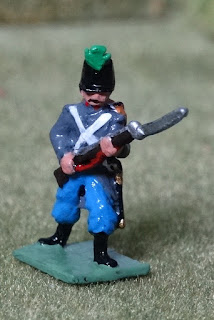 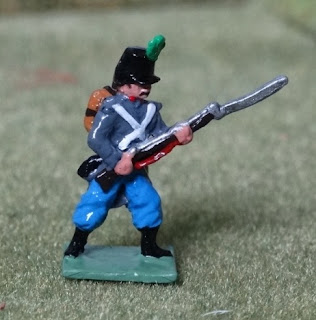 On average each Line Infantry conversion took me 1 minute 14 seconds.

As with other periods, I made both standard bearers and drummers in the usual way - cut away the riffle and drill through the hands.  The process is described elsewhere in this blog. 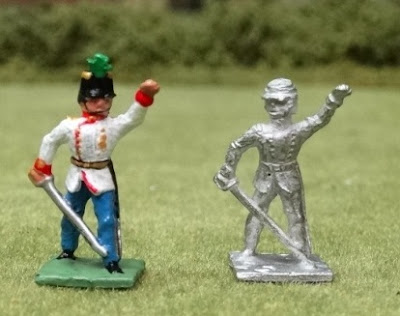 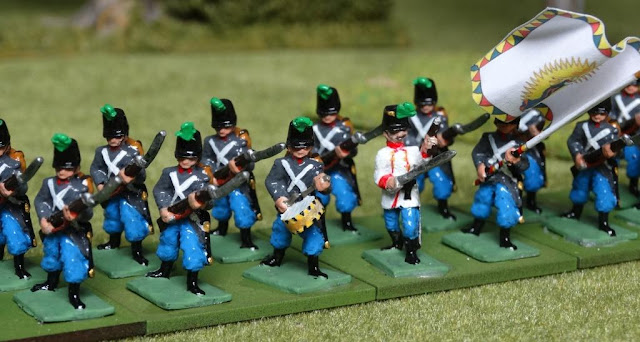 I have also played with the idea of a Hungarian Infantryman in a white coat.  This is an ACW 25 infantry figure with a head swap. 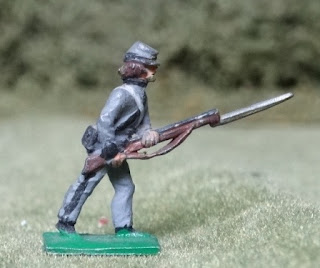 I needed to try to make a back pack. As luck would have it I had to go to Jack's to try to find a  mould for something else and whilst hunting through the boxes of moulds I stumbled across a tiny mould which looked like a back pack.  What Jack made it for he doesn't recall and it doesn't fitted any of the Jacklex range so maybe it is another lost Miltra item?  Anyway even through it is 20mm , I tried it on the figure and it looks okay for me. So work saved!

I have also added a couple of mounted officers.

As an alternative and to save any messing about you could try JPF1 listed as an 1840 French Infantry figure.  This is a conversion of the Crimean War Algerian figure but with a French Shako. This figure works for the French in the Italian Wars of unification or against the Austrians and for some of the infantry for the Italian states. Should perhaps be labelled as French 1860-66?

Again, I used the Algerian figure.  The question was how to give him a 'hat with plumes'.  A scan through the Lone S ranger's site showed nothing I could use directly.  However, I did come across FRC5 'Citizen in Top Hat and Musket' from the French Revoluntionary Range.

I made some feathers out of green stuff.  Once these had dried I did my usual head swap. The figure has a lot of hair, so I had to cut this back a bit. 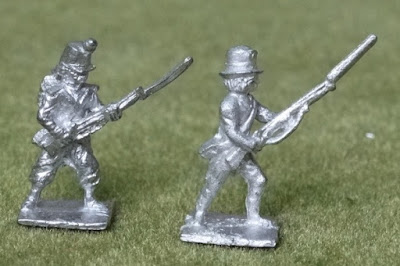 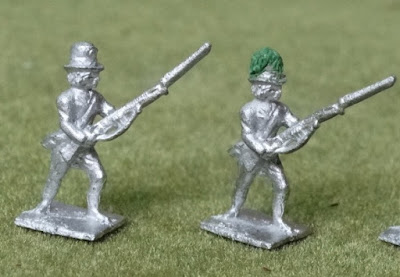 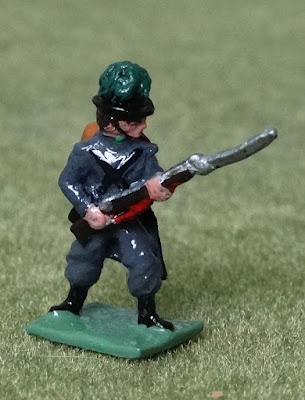 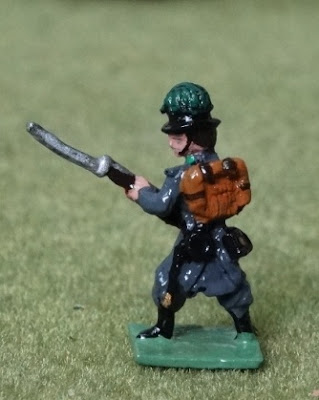 Having made a few conversions, Jack took pity on me and made a mould and cast me some extra figures.

As with the other ranges , I made a drummer in the usual way.  I could find no evidence that they carried standard into battle. I tried to make an Officer in an overcoat, I did't think it worked.  So I had another go at the officer, took away the back pack and gave him a sword and pistol.  I am happier with this result. 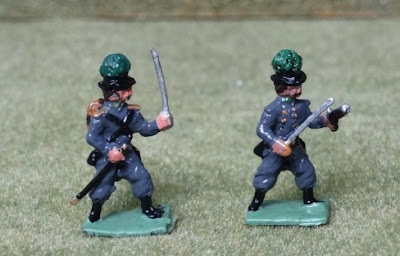 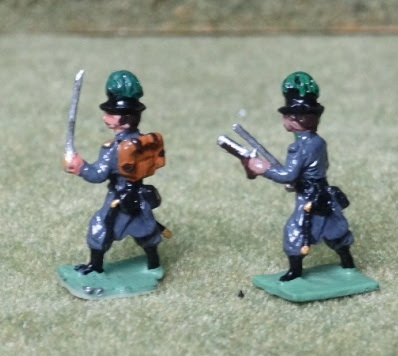 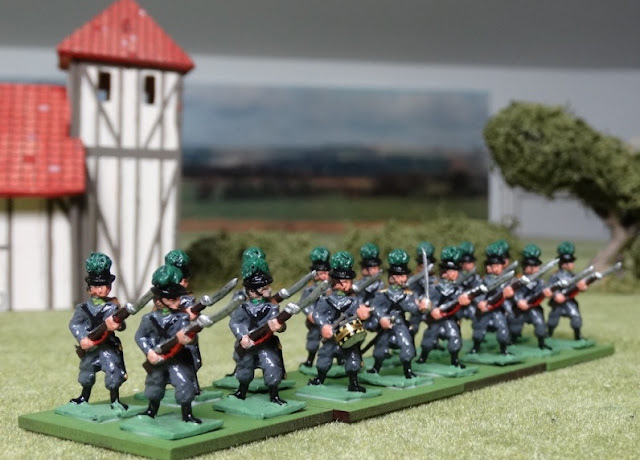 I also added a mounted officer. 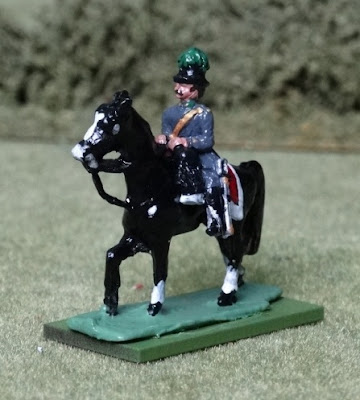 I know have six regiments of infantry.  To keep the whole project under control I have gone for regiments of 16 figures.  Converting and painting 8 figures at a time made me feel that I was making progress. In addition to the Infantry, I have made up a brigade of Cuirassiers and a regiment of dragoons and 2 guns and crews. They need commanders and that is next on the list!

Cavalry and artillery conversions to follow in another article and then the minor nations from both sides, some of which I have started to explore and others I have finished.