Carrying on the more unusual units in the Crimea, .  Looking at the Ottoman War website,http://www.ottoman-uniforms.com/1854-till-1856-egyptian-crimean-war-turkish-foreign-auxiliary-contingent-cavalry I found drawings of an Eqyptian Cuirassier.

There doesn't appear to be much evidence on the uniforms or units of Egyptian cavalry in the Crimea, but the Cuirassiers were in Constantinople so it's not too much of stretch to have a unit in my army.

I had some spare Napoleonic Wars French Cuirasssiers and pondered using a Russian Guard head on one of their bodies to give me figure with a helmet.  Then I thought why not just convert the figure.  This is the result.  Not all conversions work the way you hope.  Not my best work but it was okay for me as these were always intended to be one-offs for my army and they pass the two foot test - i.e. from the other side of the table they look okay! 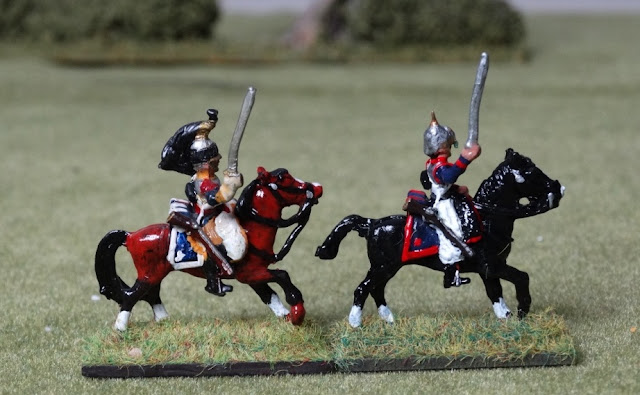 Then I filed and cut away the rest of the plume and sanded it smooth, the same for the epaulettes. The biggest problem was how to make a representation of a crescent on the top of the helmet. I tried it using 'green stuff' and it looked more like a pair of ears you see on some of those wooly hats.  So I tried drilling a hole in the top of the 'helmet' and gluing in a piece of brass rod.  This gave me a secure fixing. I then used the pliers to squash the bit of rod that was sitting proud.

With some repeated squashing you get a thin flattened piece of brass. This can then be split to make it look like a crescent - not brilliant.  I was getting impatient and should have spent more time filing. 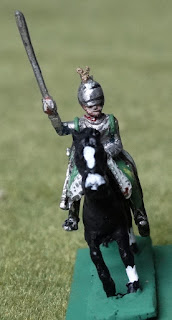 The rest of the conversion was green stuff to pad out the trousers and make rolls on the edge of the cuirass.

A quick sanding of the corners of Napoleonic blanket box turned it into a  roll.

He probably shouldn't have the belt and carbine but this is standard for all the S range cavalry so I thought I would leave it. It might have also been better if I have put some 'mesh' made of green stuff on the back of the helmet as a sort of neck guard? 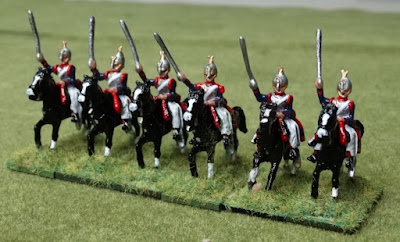 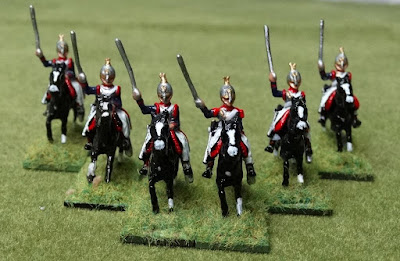 I only intend to have a unit of six figures and made each one individually hence the slight variations.