Jacklex 20mm Russians, Pathans, British and Indians fight it out

Jack came over and he, Bob and I had a game with his 20mm Jacklex figures.

The British made up of an Indian Brigade, one British and one Highland Brigade together with supporting artillery and cavalry were to take the village and force the Russians back. Jack and I commanded the Anglo Indian force, whilst Bob took charge of the Russians and Pathans.

Jack was unfamiliar with the rules so we played the basic Black Powder game moving in inches.  We played 'up the table' giving us a 7 ft long by 4 ft wide playing area. 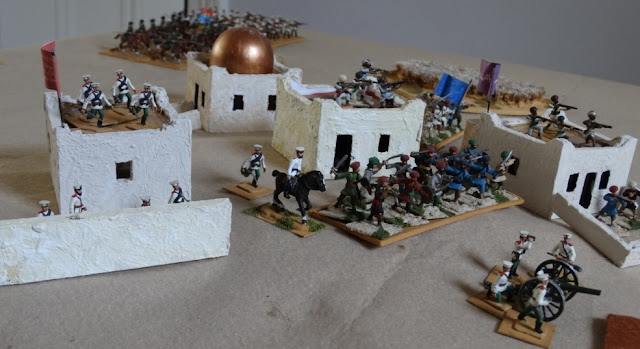 The Russian/Pathan front line formed along a walled field and some broken terrain occupied by Pathan riflemen.  This patch of rock and scrub land was to prove a major obstacle for the Anglo Indian force. 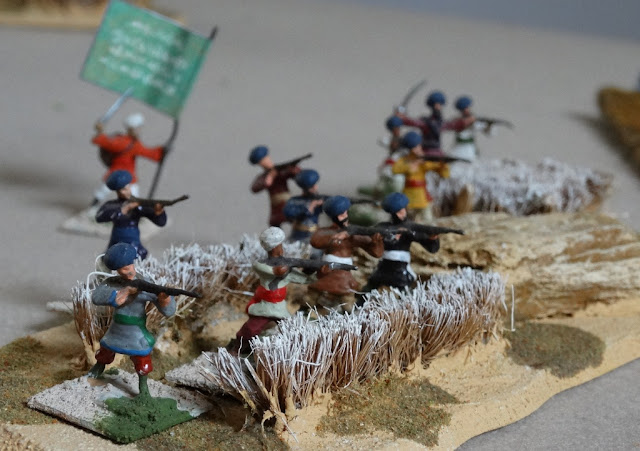 The Anglo Indian force started with only the Indian Brigade in line the British and Highland Brigades were in column advancing in support. 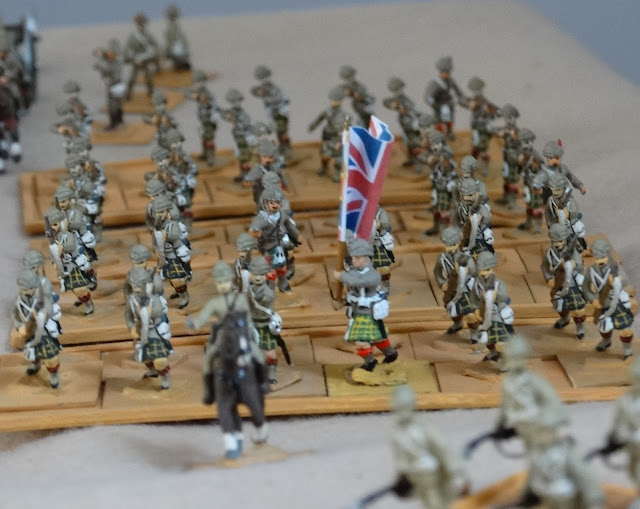 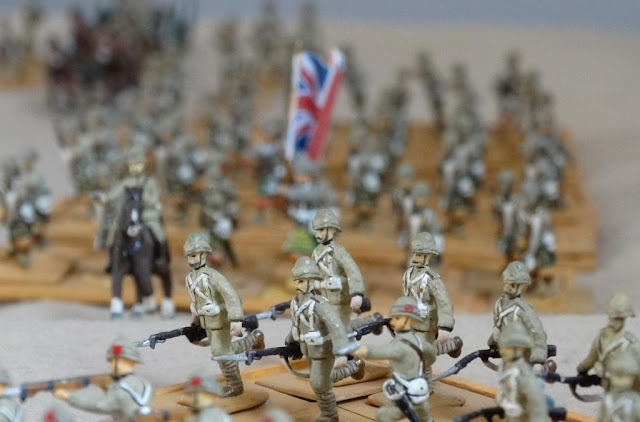 The Anglo Indian force need to take the initiative and Jack quickly moved the Indians forward with 3 moves. 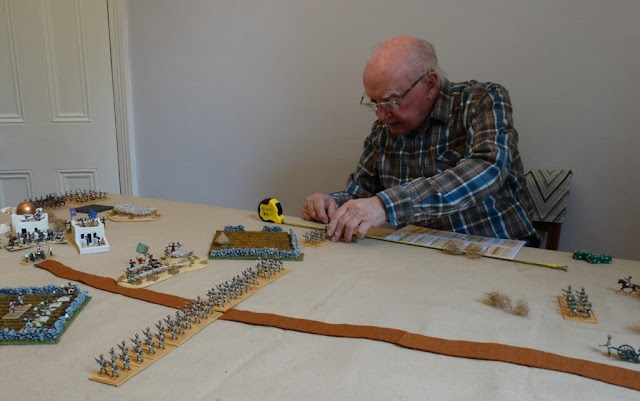 The supporting British Brigade decided not to move and this in turn stopped the Highland Brigade from advancing up the road!  The Indians were on their own!

The Indians start to take casualties.

Bob struggled to get his Russian brigades moving 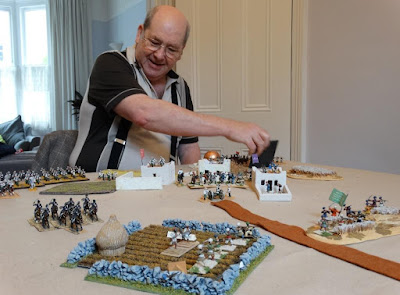 The Russians also started to advance.  Jack launched his Indian lancers in an attempt to stem the advance. 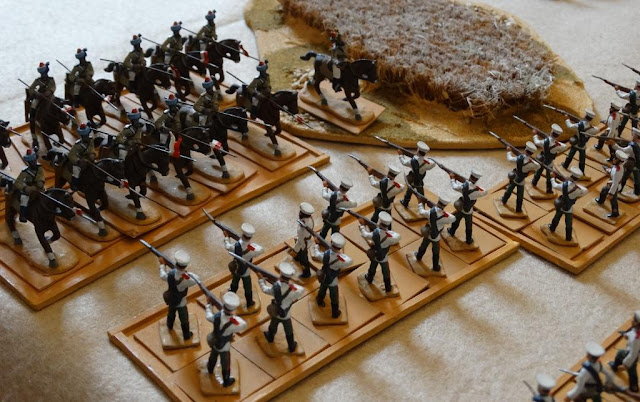 The high watermark of the Indian advance.  The Indians get to grips with the Pathans who were the front line. 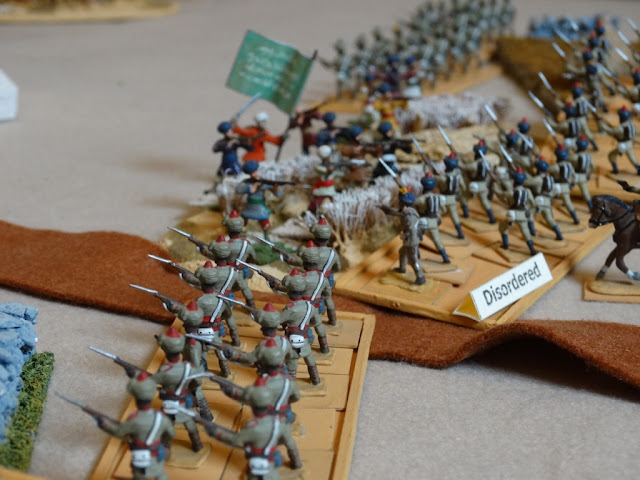 The Indian cavalry suffered badly from the Russian rifle fire but still managed to get past their Break Test and plough home.  They couldn't survive the subsequent melee and broke and fled.

In the centre the Indian Infantry who had already suffered casualties from rifle and artillery fire broke after the melee. 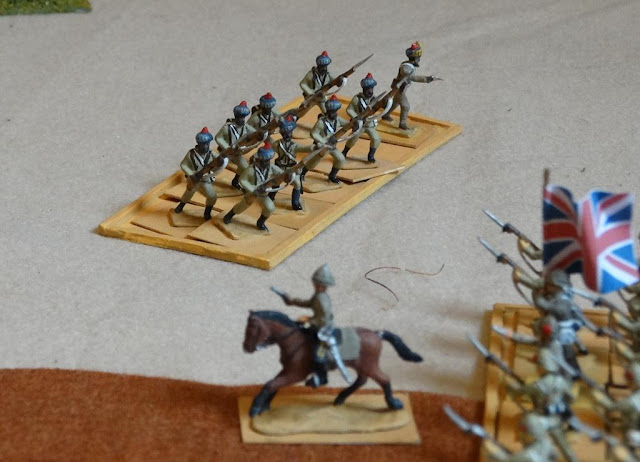 The supporting British and Highlanders deployed to advance. 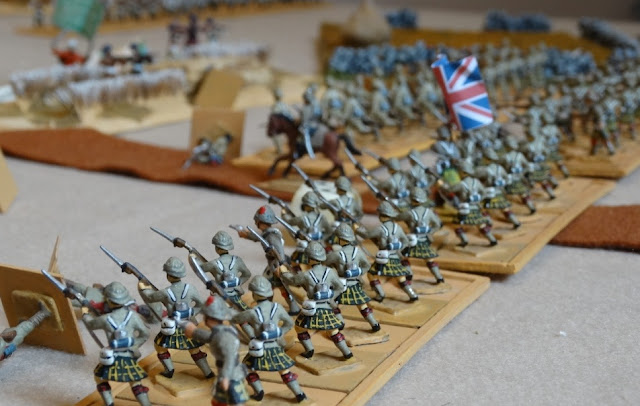 My lancers charged forward to take on the Pathans.  Readers will recall from other games involving the lancers that Carstairs and Carruthers serve with this unit.  Both were awarded the VC after their heroics in an earlier engagement.  They were joined in this battle by their friend Arbuthnott. The lancers forced the Pathans to retire. 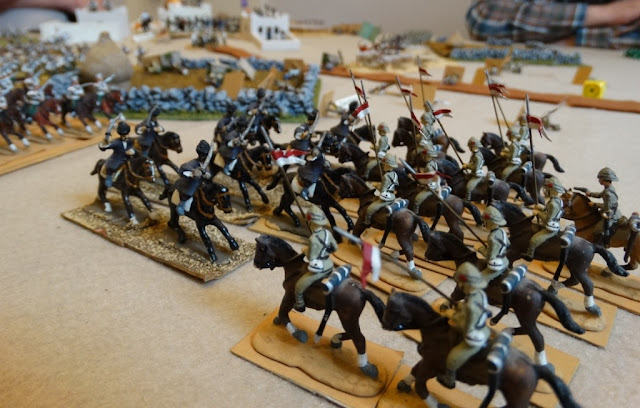 Jack decided that having driven off the Pathans and the Russian cavalry withdrawing my lancers should charge the supporting Russian Infantry.  Carstairs, Carruthers and Arbuthnott with the rest of the regiment charged forward into a hail of Russian lead! 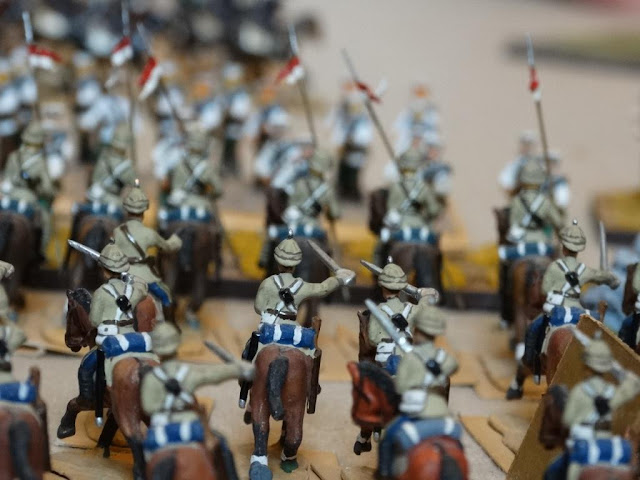 Somehow the lancers managed to make it. After the melee their were still there! 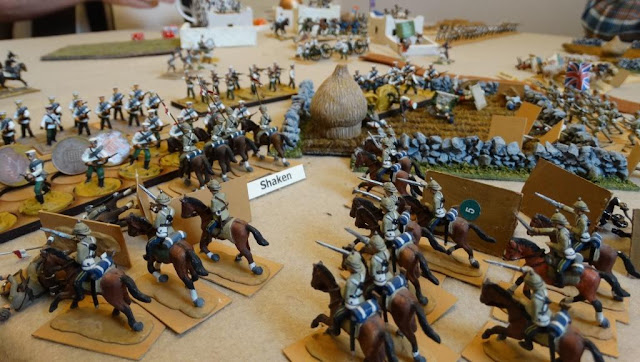 However, Bob and I thought this was an implausible outcome and agreed that although not broken Carstairs, Carruthers and Arbuthnott  should retire.

On the hill the British and Indian artillery batteries fired turn after turn to no effect!  It was only after the game that Jack and I agreed that we should have advanced the guns as they proved hopeless throughout at long range. 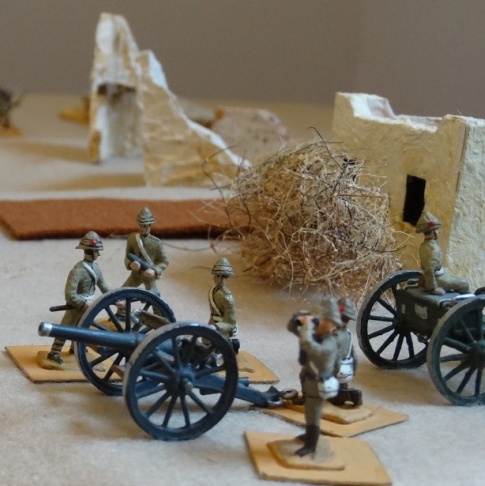 The Hussars followed up to hit the disordered Russian Infantry driving them back. 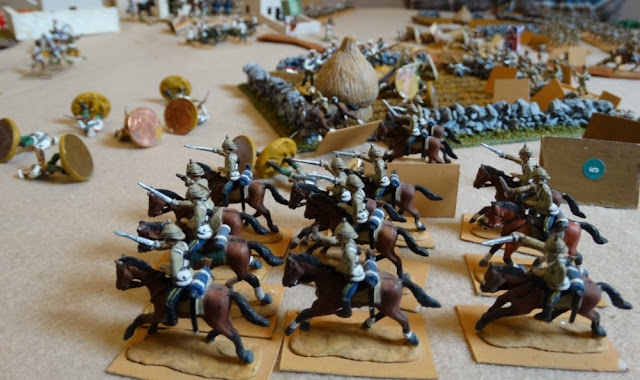 In the centre the British and Highlanders reached the scrub land and walled field.  The Pathans who had suffered from the earlier Indian assault were driven from the scrubs and the British and Russian Infantry were exchanging hot fire across the field.

But now Bob's artillery came into their own time and again they poured successful fire into the advancing British and no amount of rifle fire or long range artillery could silence them.  They just ripped into the British and Highlanders sending regiment after regiment back in disorder and fleeing the field. 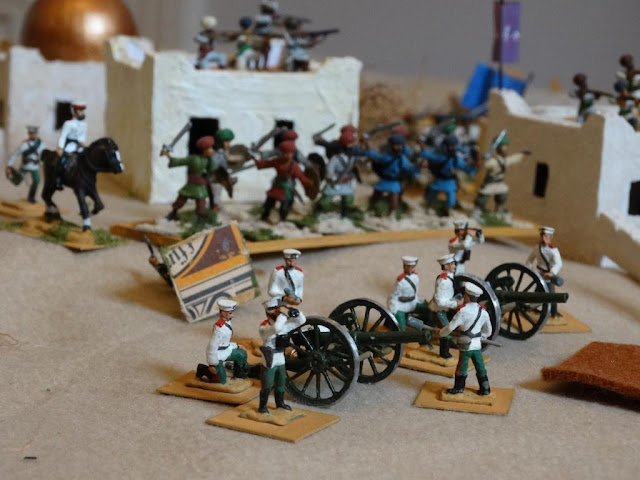 The first of the British regiment leaving the field 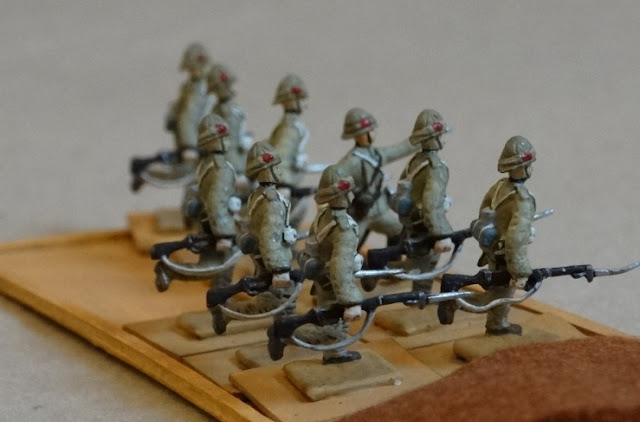 Soon followed by others! 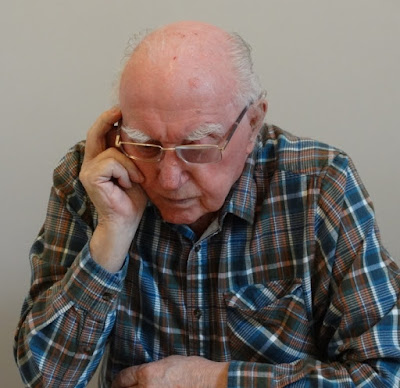 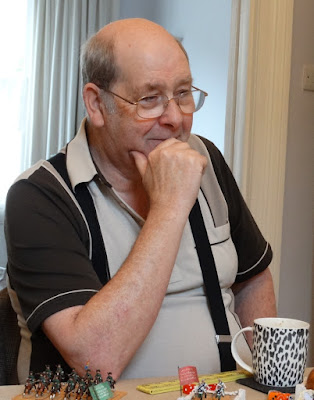 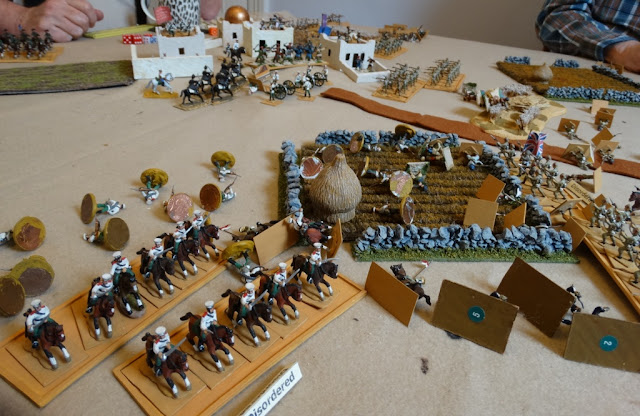 Bob then repositioned his guns to fire on the British troops closing on the village. Hitting them with close fire and driving them back in disorder.  Is there no depths to which the Russians will not plunge! 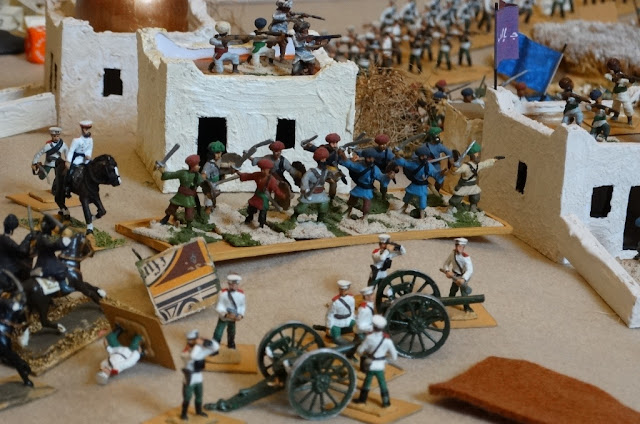 In a moment of sheer bravado, Bob ordered his cavalry to charge home against the Highlanders on the left flank. The British who could have laid down some supporting fire to help their Scottish friends decided instead to lay more fire into an already weakened Russian Infantry regiment.  As a result the cavalry made it home forcing the Scots to retire. 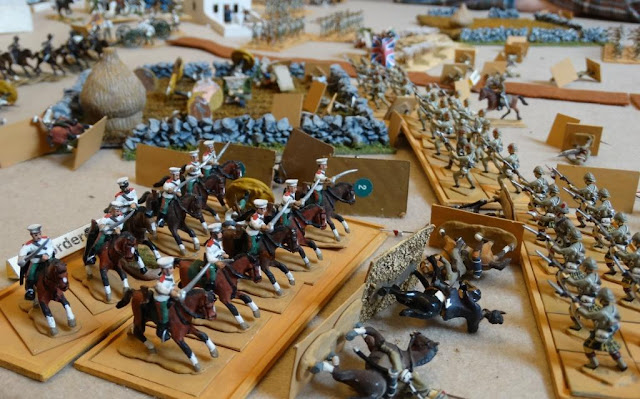 It was all up for the British.  The Indian Brigade was smashed, Several British regiments were fleeing the field and although the Russians lost one Brigade and the other was temporarily halted they retained the village.

The Russian artillery had been vital and although one battery was slow to get into action, once they both opened up and consistently found the mark the Anglo Indian forces were doomed.

Following the battle the Czar (Bob) made the unusual award of the Order of St George the Martyr Fourth Class to the officers and enlisted men of the artillery battery, who in the Czar’s words “performed with great heroism despite being under constant artillery and rifle fire from the British. They lived up to the inscription “for bravery” on the badges they can proudly wear at their necks”.

The decoration was to be conferred solely “for exceptional prowess  displayed for the greater glory of the Russian arms.” It remained until its abolition in 1917 the most sought after decoration.

We had a good time and Jack was on form.  All the figures British, Indian and Russian forces were painted by Jack over 40 years ago and have stood the test of time.  All the lining of belts etc were done with a black pen.  Jack said it was quicker than trying to paint lines!   The Pathans which are also Jacklex were painted by myself over 20 years ago!

It was great to see so many Jacklex figures on the table and to realise just how many more there were in the boxes and could have been put out!
Posted by ABC Wargammers at 21:08