Bob laid out the 'Blood On The Danube' scenario from the Pike and Shotte rule book for a Thirty Years War game using the rules.

In this scenario part of the Swedish army is sent to chase down the rear guard of the Catholic Army. To add spice to the game the Catholics have stored the imperial war chest in one of 3 locations; a Manor House on their left flank; a Windmill in the centre; and another building on the right flank.  We didn't have a windmill so Bob substituted with another building. Finding the treasure wins the game.

Bob commanded the Catholic forces using a random selection based on a dice roll to  decided which building would house the treasure.  and I took on the task of commanding the Swedes.

The starting forces.  The Swedes 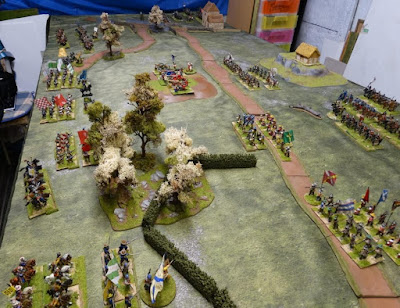 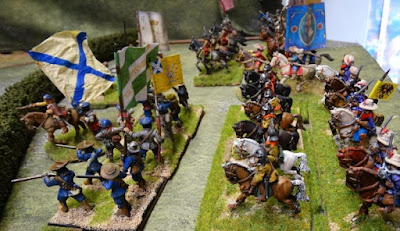 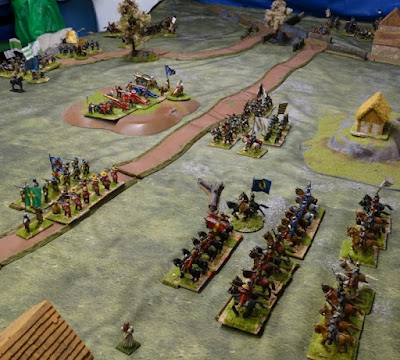 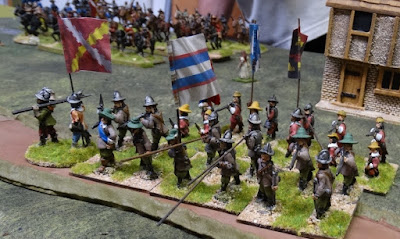 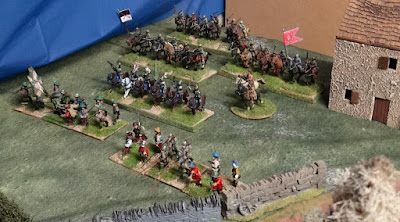 In the example in the 'Pike and Shotte' book the advancing Swedes suffered badly from the artillery on the hill. In our game, I got 3 command moves and was on the guns before they had much chance, helped by the narrower table width. On reflection Bob probably should have had a round of fire before I moved to reflect the closer distance.   Anyway, the closing fire stopped one regiment, but the other closed and engaged the gunners. 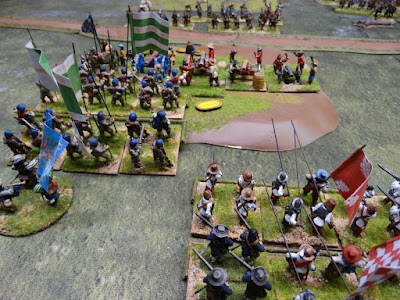 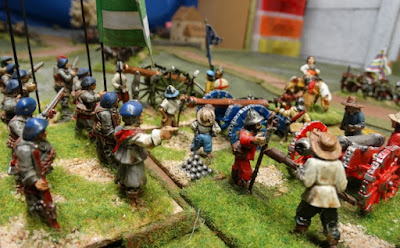 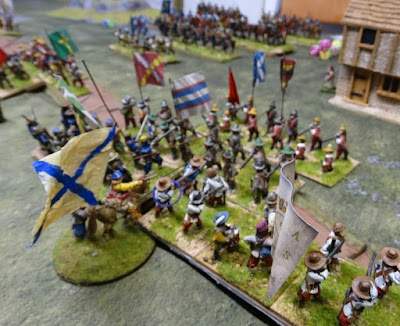 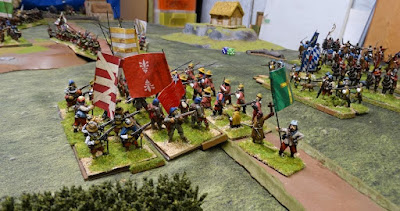 My Pikes made short work of the musketeers and the gunners fled.  Bob brought up his supporting central infantry. On his right we got back to the brigades failing to follow his command and masses of cuirassiers sat and watched. 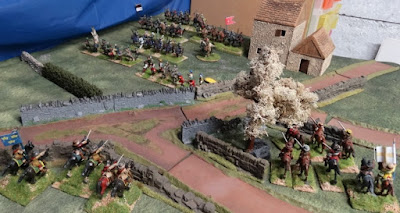 I fared better and my dragoons made the walls and hedges on the left and starting taking pot shots even managing to hit someone.

In the centre the Catholic artillery pieces were removed from the table and Bob moved his infantry brigade forward at a pace to confront the Swedish infantry. 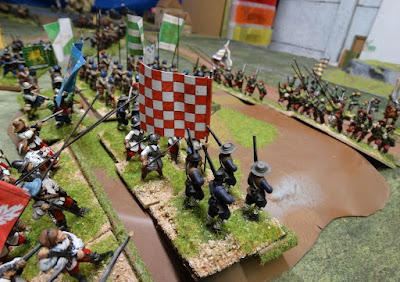 The Swedish Guards, having failed to move initially advance into the fray. 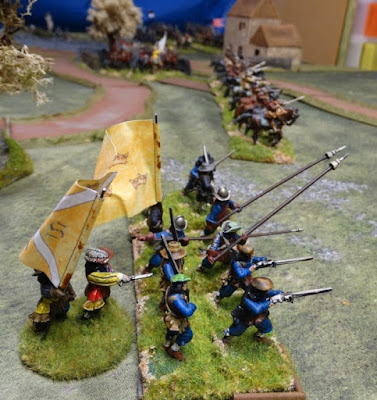 Having seen off a group of Catholic musketeers the Swedish and Catholic pike units got to grips. 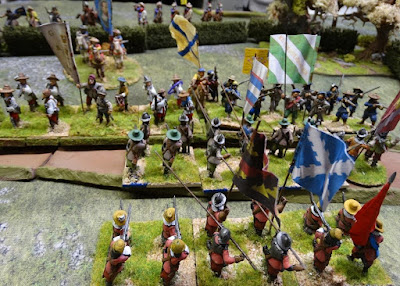 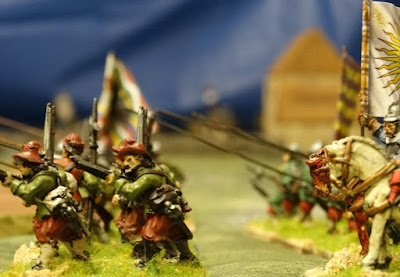 On Bob's right his cuirassiers and infantry finally got going.  My problem was that I had only deployed Dragoons to hold the position. 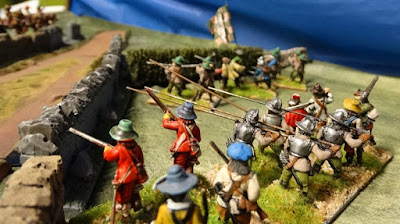 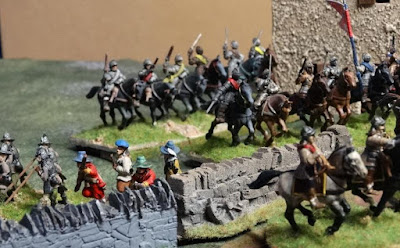 Could I find the treasure before the hammer blow fell? 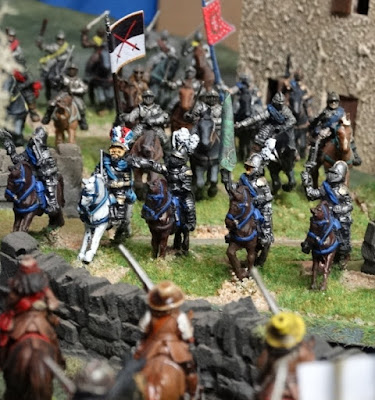 All I thought I could do was throw forward my remaining infantry and cavalry in the hope that it would deflect the attack by posing an alternative threat.  The dice were with me and all my brave lads advanced. 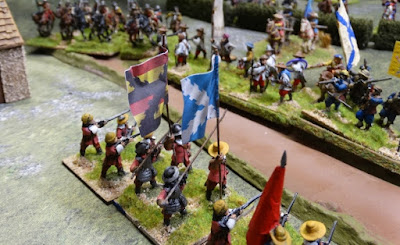 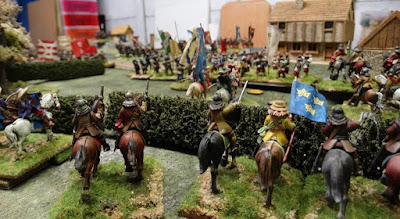 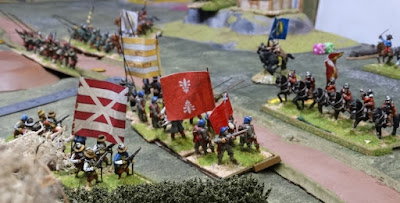 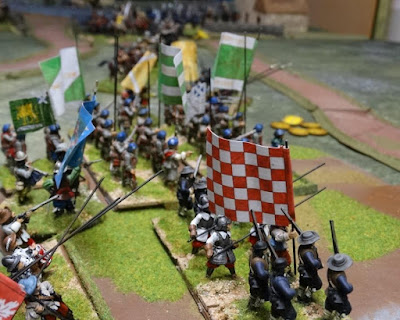 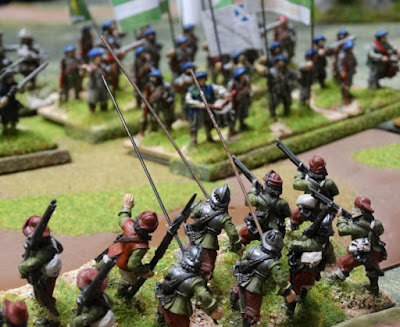 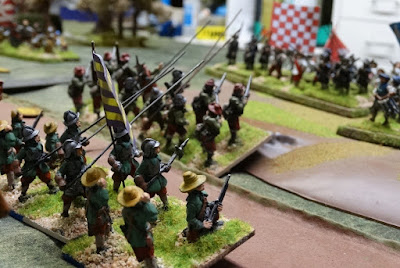 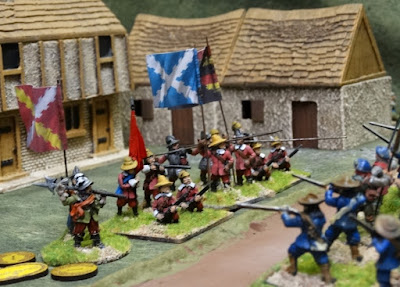 However his cavalry weren't so keen. 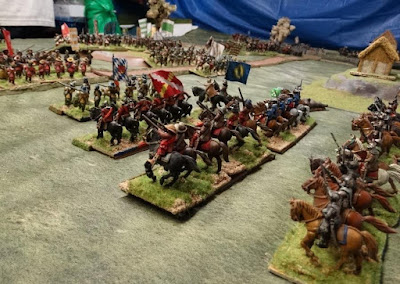 A gap opened up between the Catholic right and centre and I felt the need to exploit this by advancing my Finish Cavalry, some of the best on the table, to exploit this in the hope of crashing into the rear of Bob's infantry who were stoutly holding the centre.

Of course, as you do, when enthusiasm takes over control, I forgot that this same cavalry were supporting my dragoons and were the only thing that could stand against Bob's cuirassiers!  Worst still they then stopped and didn't respond to orders!

Bob moved a unit of cuirassiers to thwart the advance, leaving the 'Windmill'/ house in the centre undefended. 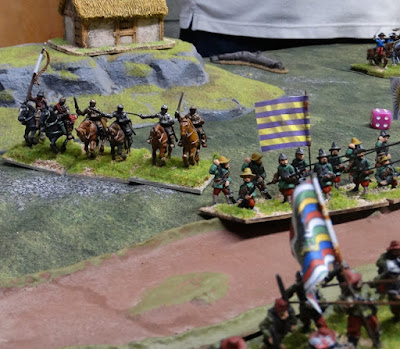 All the time I had a unit of cuirassiers just standing around who suddenly woke up and got a 3 command move.   They took passing fire from the Catholic infantry, but nothing could stop them on their quest and they were able to take advantage of a gap that had appeared on Bob's left flank to reach the 'Windmill' (or house).

This revealed a 'pay master' in charge of the Catholic treasure who was the worst for ware and resulted in a win for the Swedes. 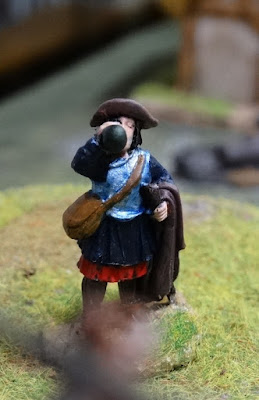 This was a very fortunate outcome as Bob was about to crush my dragoons on my left flank and had a large unit of cavalry ready to exploit any sniff of victory by his infantry in the centre and on the left. 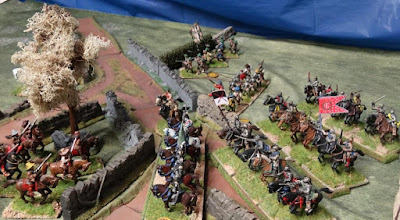 A very enjoyable game were we got more things right with the rules and spent less time looking things up.  I was very lucky with my initial infantry move being able to overwhelm the artillery and on more looking at the rules, probably got less artillery hits than I should have but we live and learn as they say. The similarities between these and the Black Powder rules in places also helped to speed up game play.

Following a request on The Miniatures Message board about the figures used in the game I have amended this blog.


These armies grew out of Bob’s ECW armies which were based on 300 plus figures from Irregular Miniatures. Some Renegade figures were added and we played a few games. The figures languished for several years until Warlord brought out their plastic TYW range. Bob added more units and turned his ECW armies into Swedish and German Imperialists.
Used with Bob’s Poles and Turks we are able to game a range of armies and conflicts.

All Bob’s figures are based for a particular set of rules with 4 infantry or 2 cavalry on 50 x 50mm square bases. Three bases form an infantry or cavalry regiment. These work fine with Pike and Shotte and Black Powder as well as other stand based rules.
Posted by ABC Wargammers at 20:07