Bob picked up a copy of the Warlords 'Pike and Shot' rules and some figures as part of a recent deal which they offered.  We tried the rules out briefly at Bob's and felt that with a bit of practice they had something to offer.  We also thought that the Black Powder version would probably have many of the same game techniques and with my Franco Prussians, Crimean War and ACW figures they could prove useful.

I don't consider myself mean but £30 for a set of rules is a lot.  Some scouring of ebay and I was able to pick up a second hand set for £20 plus p&p, still a lot of money but marginally more acceptable.

We kept it simple by having all the Command, infantry and artillery using the same factors. The movement rates can be very significant so I decided to set the game up on the diagonal to help cope with this.

The confederates had large 2 brigades of 5 infantry regiments and 2 guns, whilst my union troops also consisted of 2 smaller brigades of 4 infantry regiments and 2 guns on an opposing rise.  The objective, and this was more a game to test the rules than 'have a winner', was for the confederate forces to leave, or reach the opposite diagonal on the table. 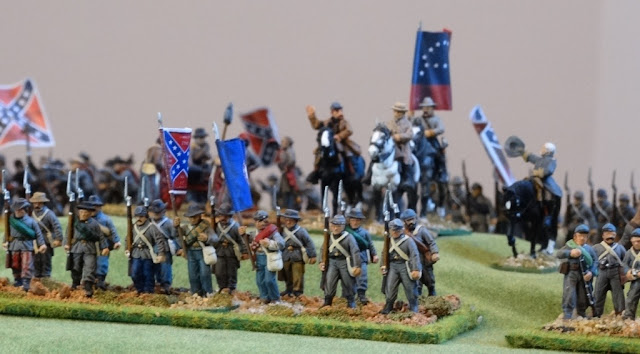 Union forces on the opposing ridge 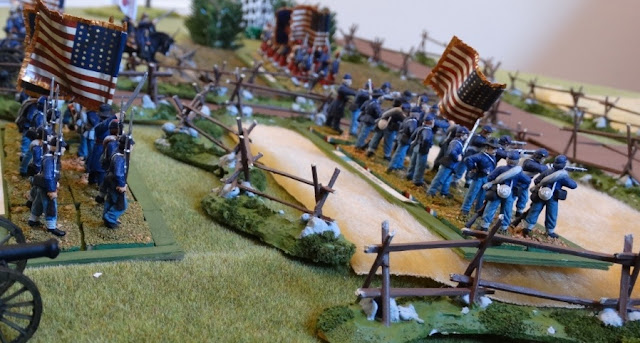 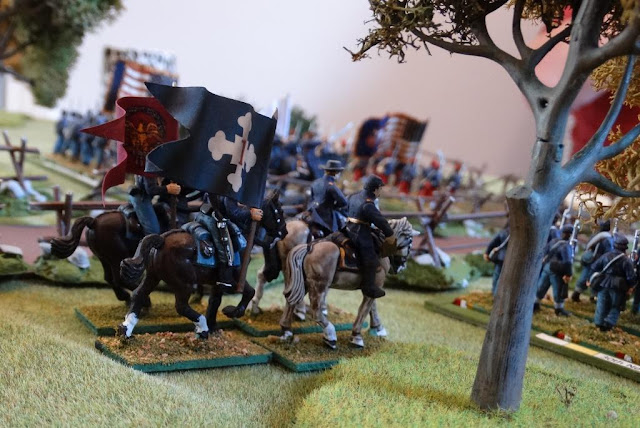 In these rules you can give commands to units or Brigades. You have to say what you want your troops to do before you roll to see if the order gets there.  Dependent upon your dice and the quality of your commander you can move 1,2, or 3 moves or fail to move at all.  Bob gave his orders to his Virginians to advance, rolled and managed one move.  The Louisianan Brigade also advanced.

The Confederate view of the Union lines 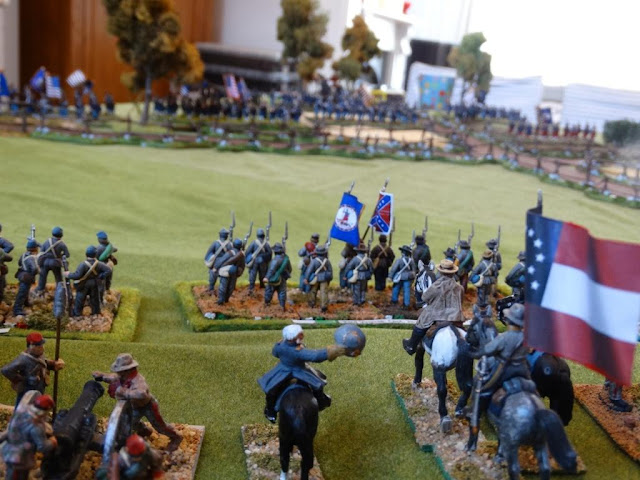 The Union troops prepare for the approaching Confederates. 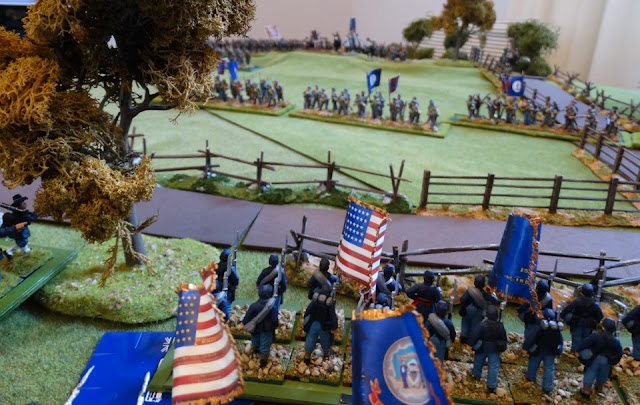 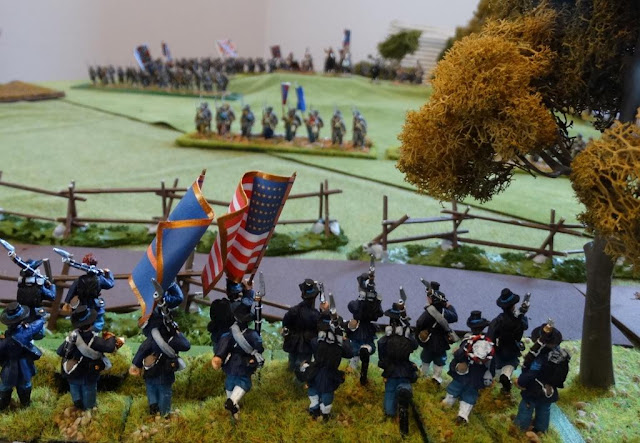 An artillery hit on one of the Virginian regiments resulted in a morale test which in turn resulted in them retiring for a move, causing some confusion in the brigade. 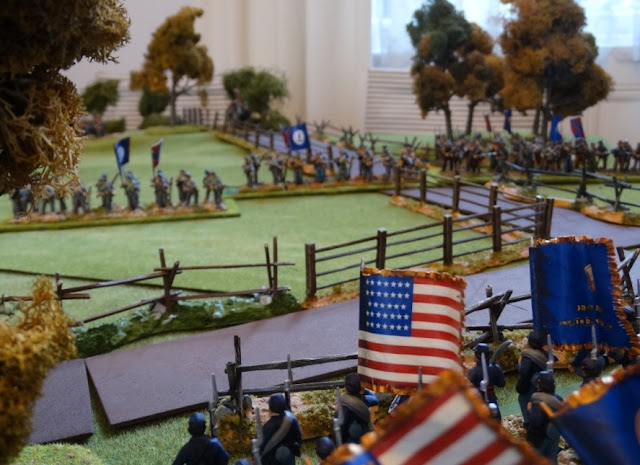 The rest of the Virginians continued to advance 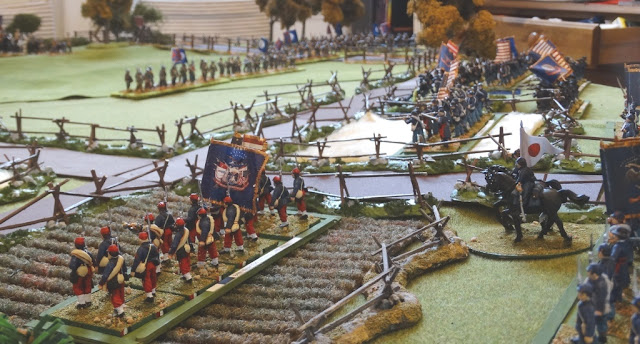 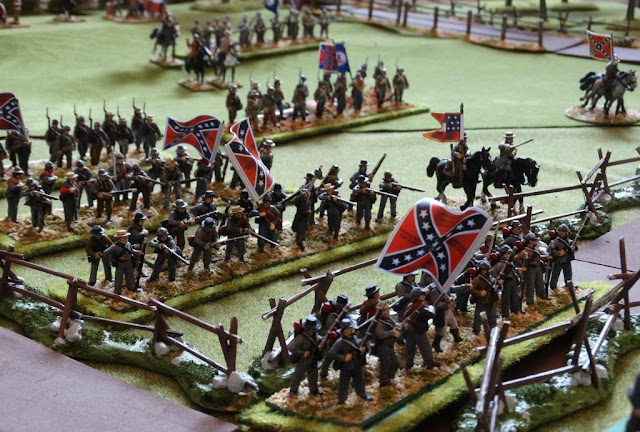 Meanwhile the Louisianans surged forward with '3 command ' moves and soon joined the fray.

In these rules you don't take of casualties as such, the units stamina being important. Morale is also important. Disaster befell two of my regiments in a confrontation with the Virginians and they left the field 'destroyed'. This left a 'little gap' in the front line!! 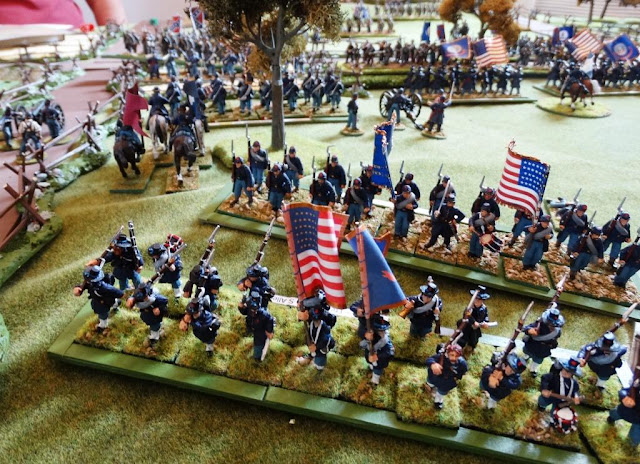 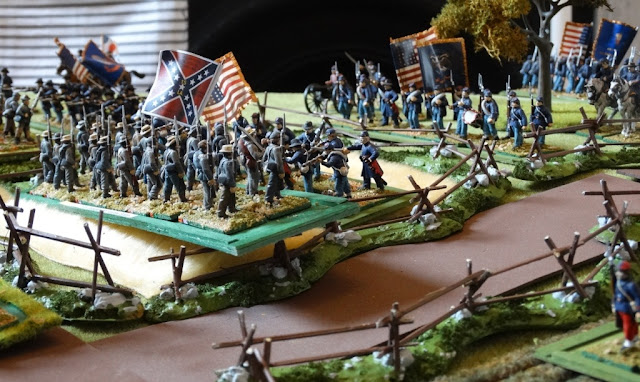 After seeing off two regiments of one of my brigades, my second line of 'Black Hats' showed more stomach. 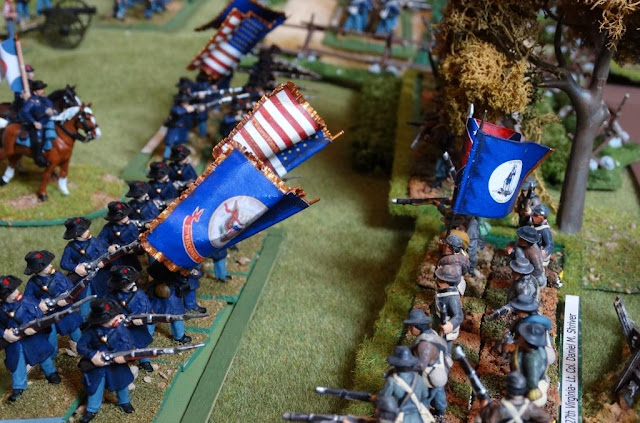 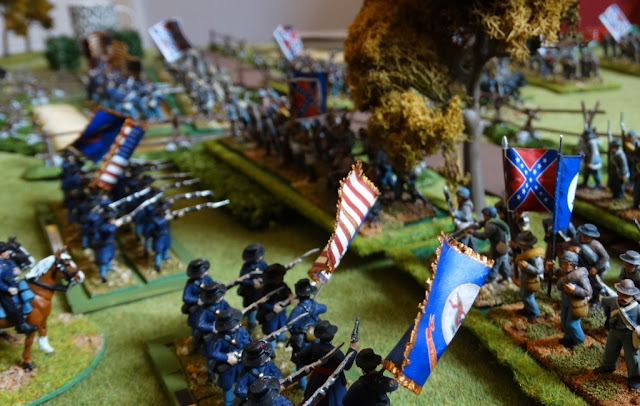 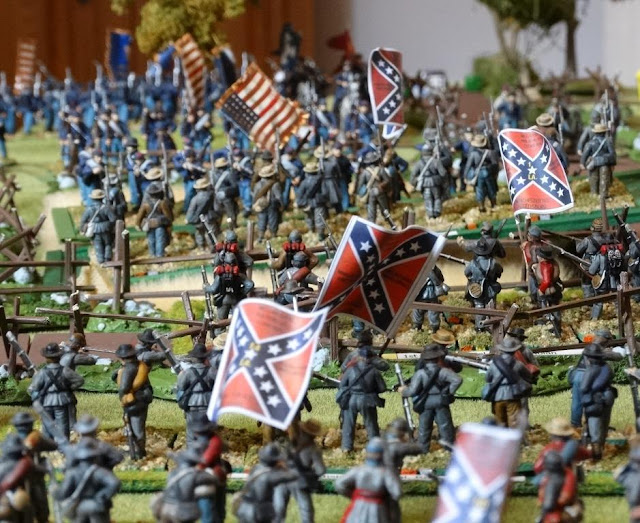 The Louisianans surge up the slope. 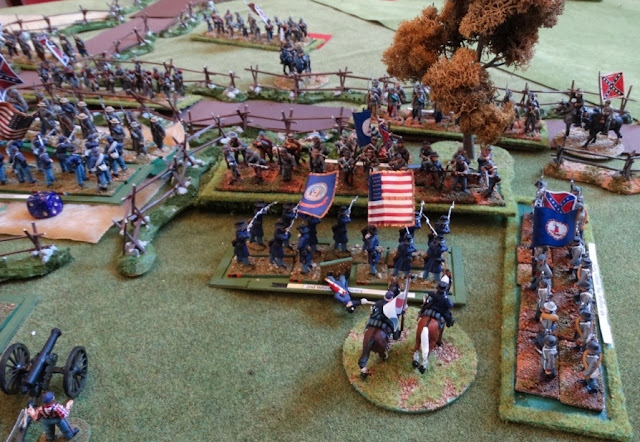 Having lost their supporting regiment, my last Black Hat regiment find themselves fighting on 2 fronts! 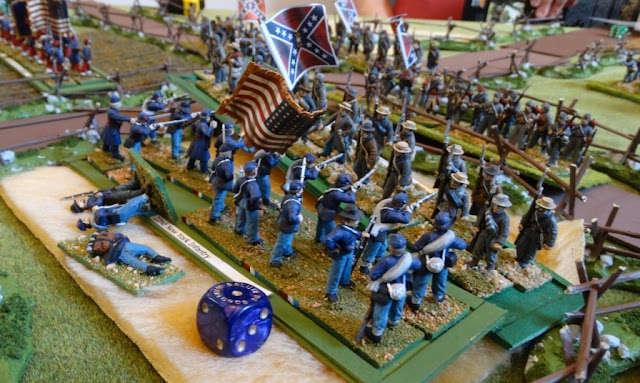 Meanwhile other New York regiments are engaged in desperate fights. 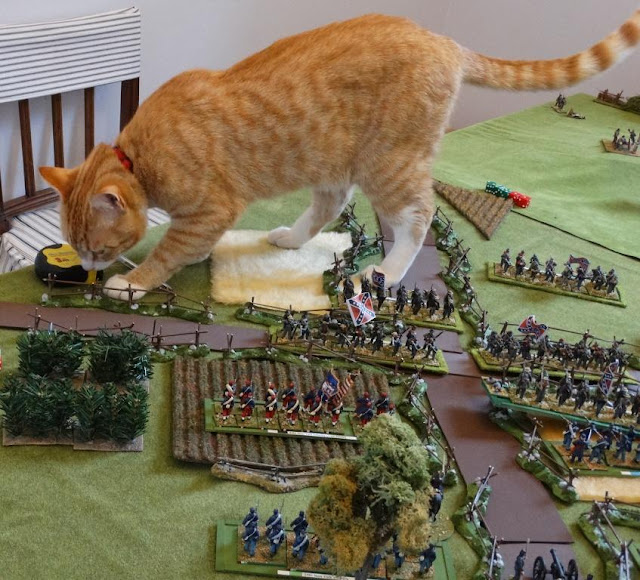 The landscape is broken up with snake rail fences which Jack made and they are causing some disruption to the Confederate advance.  The Confederates send in their Kitten Force engineer (Kingston) to break them down!!  Oddly, these rules fail to cover this sort of attack. Something to cover in any rewrite? After some debate, it is ruled that this is illegal and an exclusion order is issued on Kingston! 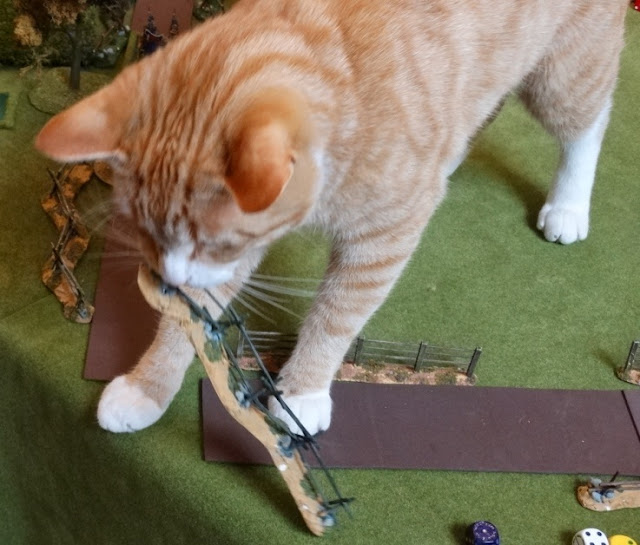 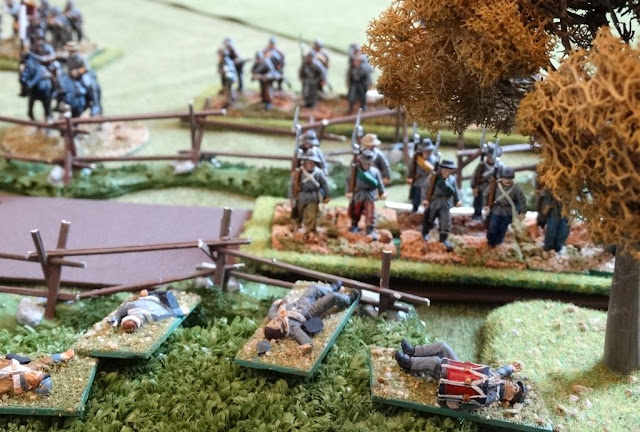 My remaining Black Hats managed to see of the Virginian regiment to their front but were forced to retire by the flanking regiment. 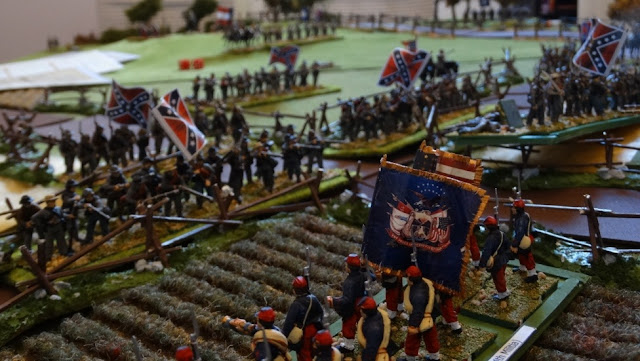 Up until now the Brooklyn Chasseurs have had a quite time but regiments of Louisianans engage them. 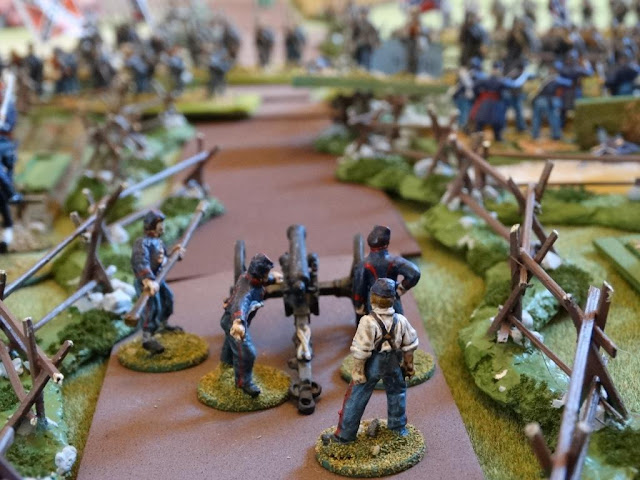 The artillery on both sides was relatively ineffective taking pot shots at long range to little effect.  As the Confederates closed the range I started to score hits, slowing some of their regiments.  These rules have 3 ranges  long, medium and short and you roll either 1,2,or 3 dice (die) dependent upon range. 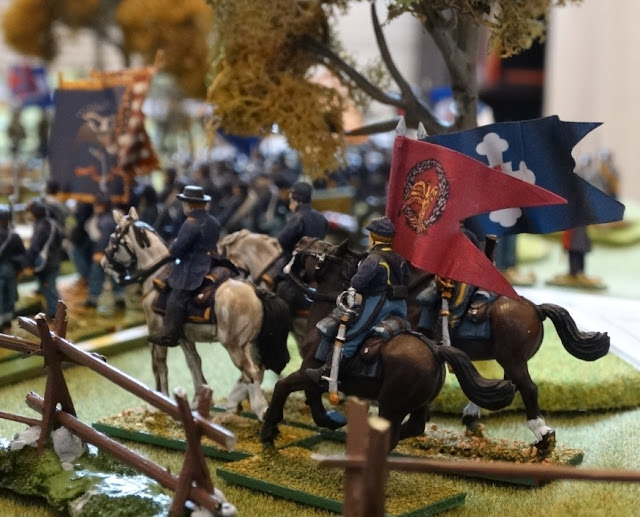 Things are getting a little hot for my General and we call a halt to the game to consider the rules and the game play.  Although I have moaned about the costs of the rules they played quite well. We made mistakes interpreting them, but sorted it out as we went along and on the whole thought they were quite good.  Whilst they cover the Colonial period as well, we think we will stick to the Sword and the Flame for the time being.

The authors say you should use 'casualty markers' and make some comments about marking casualties in any other way.   Casualty figures are an expensive luxury, fortunately, I have some which are converted Napoleonic casualties left over from boxes of Napoleonic cavalry which Jack had bought.  A pity you can't buy these as separate sprues from Perry's.