Having converted and painted enough Austrians and allies, Bob and I decided to try them out.  The Prussians are out-numbered and defend a village.  The Austrian objective was simple, to drive the Prussian from the field. 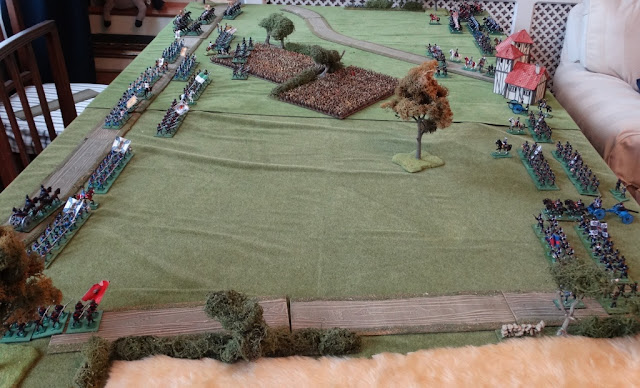 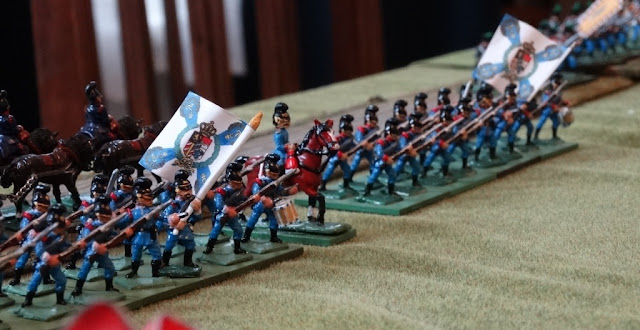 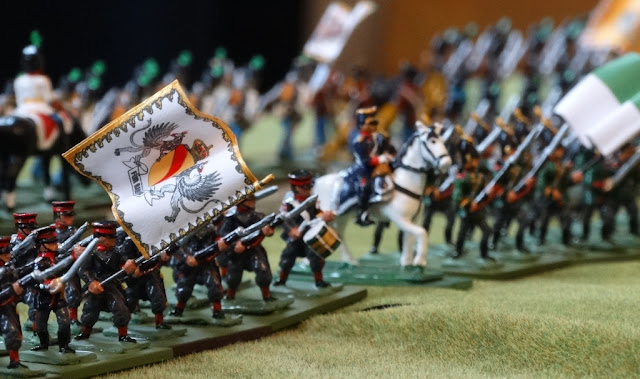 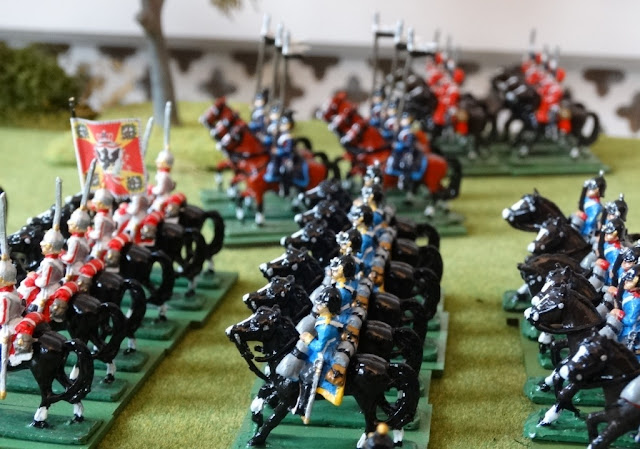 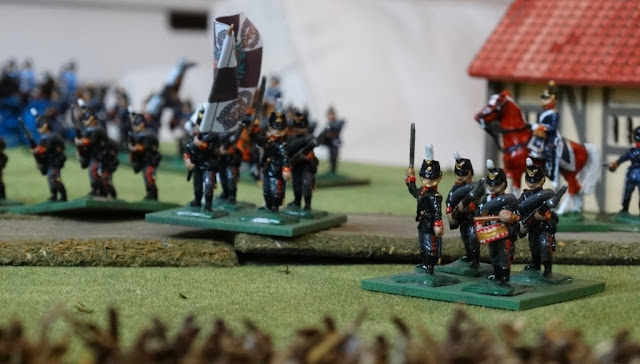 Bob had the initiative and ordered his brigades to advance.  Despite their lower command level all obey orders, except the Austrian cavalry, and advance. 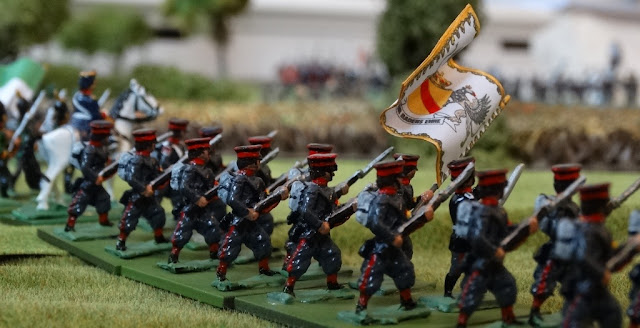 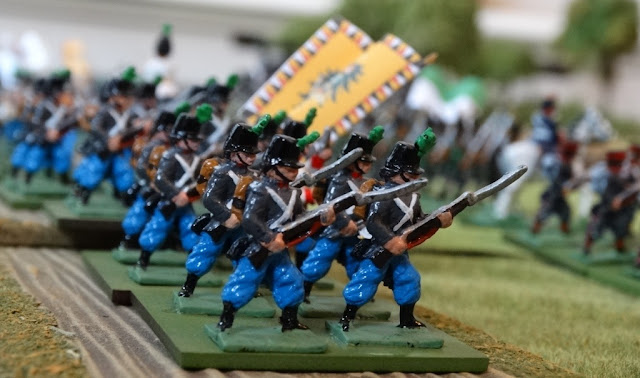 The Austrian forces on the road rush to their deployment positions

For the first time we found that all the brigades respond to orders and the Prussians and their allies move to react to the Austrian deployment.  The Prussians bringing forward their limbered gun (managed to make a rider for the gun seat, must make the other one sometime). 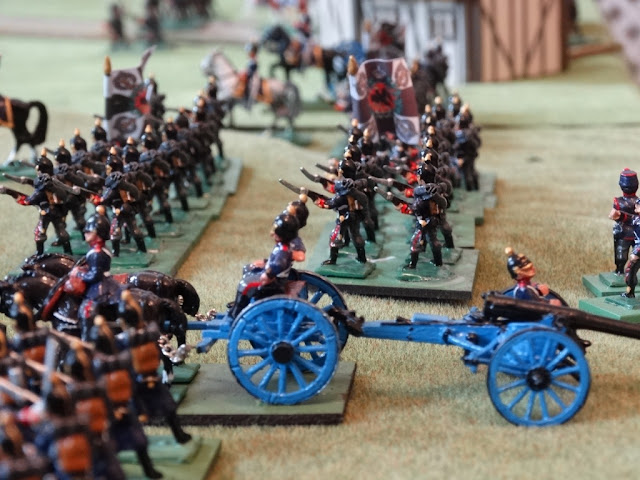 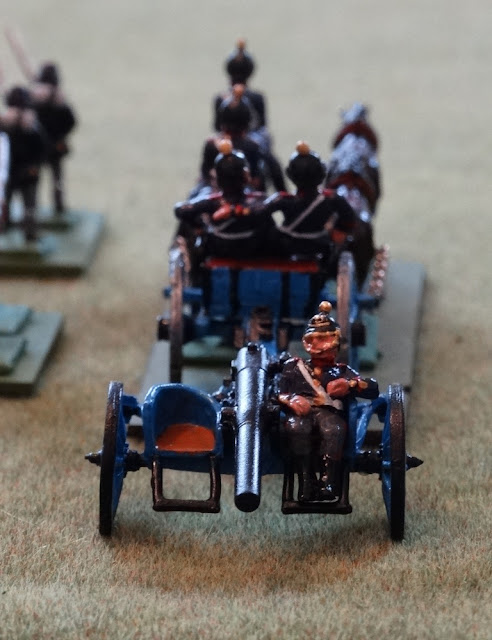 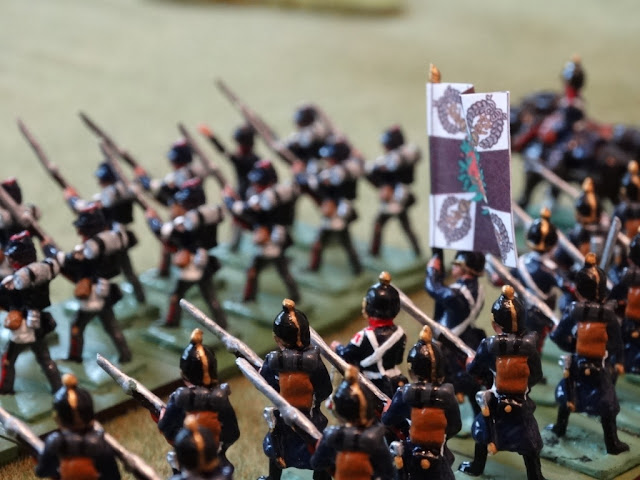 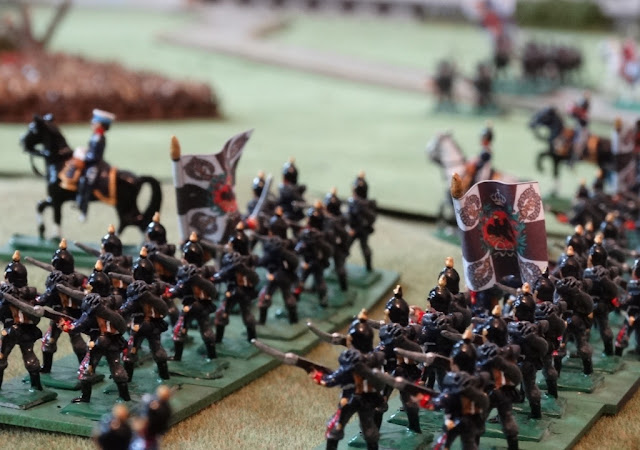 The deployed Prussian artillery open fire to no effect.

Again all the Austrians moved, including their cavalry

And the Jaegers open fire on a Prussian regiment

The Saxe Cobourg regiment moved into the open ground to the extreme right supported by the Prussian Hussars. 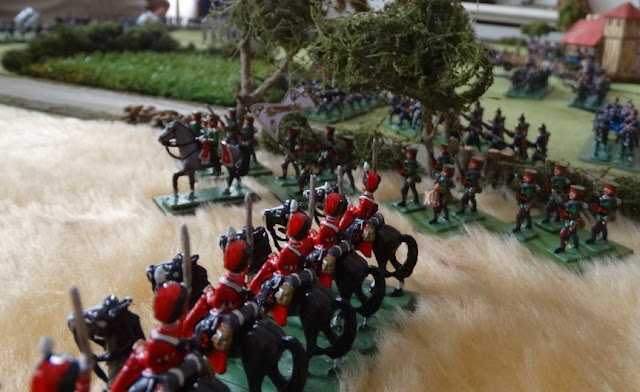 Having got some momentum, Bob launched an Austrian Cuirassier regiment into a charge against my Prussian Cuirassiers.

The Prussians counter attack and in the ensuing melee suffer badly being shaken and forced back, with the Austrians following up. 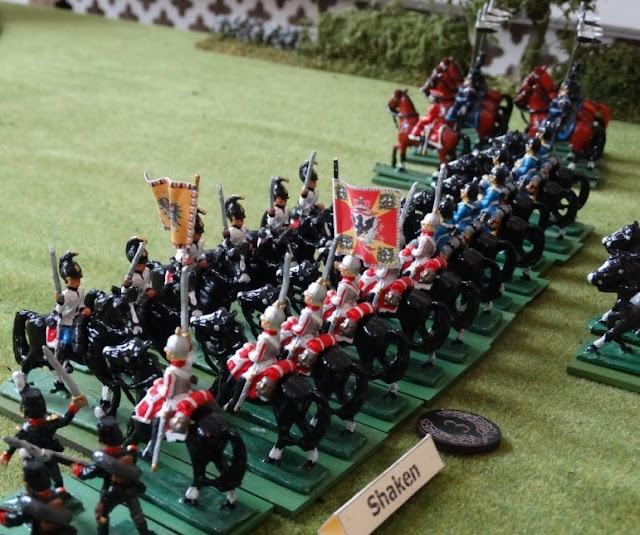 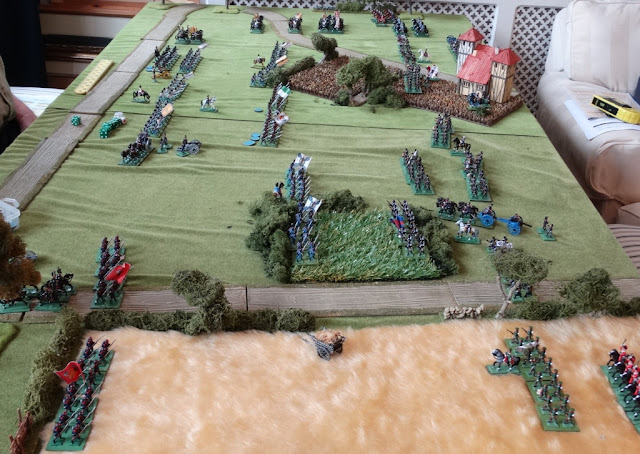 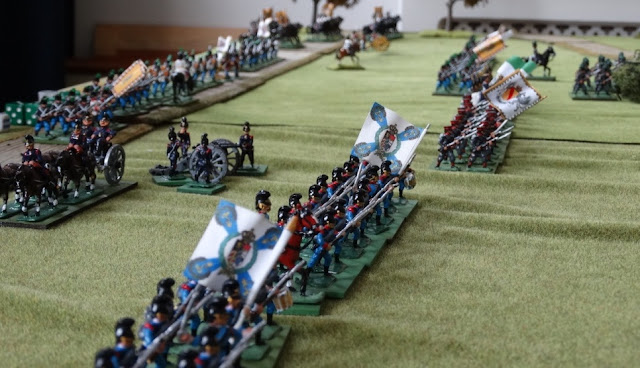 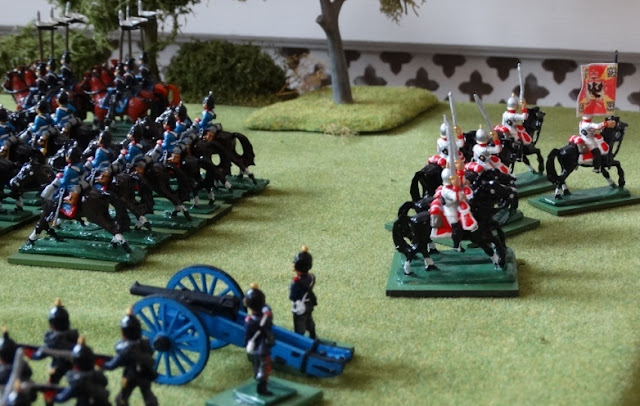 The Prussian and Austrian artillery and infantry now engage one another. The Jaegers are broken in an exchange with the Prussian Jaegers and line infantry and retreat to recover. 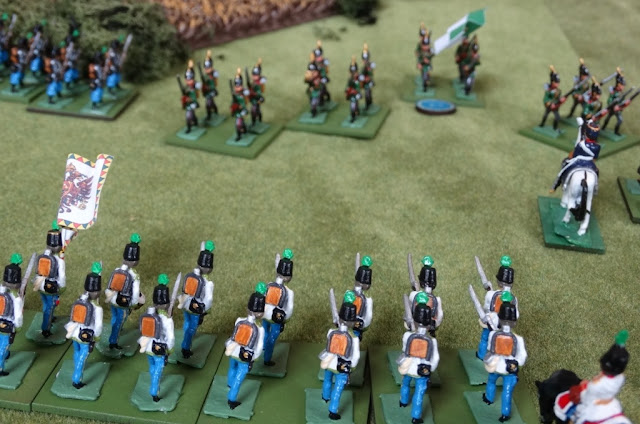 In the centre the Austrians and Prussian are heavily engaged in a fire fight, with the Prussian artillery playing a vital part forcing the Hungarians and supporting Austrians to halt.  The Austrian and Wurttemberg artillery often being masked by their own advancing troops had little to do.  The Bavarian artillery however played its part scoring hits on the Prussian regiments who manage to stand. 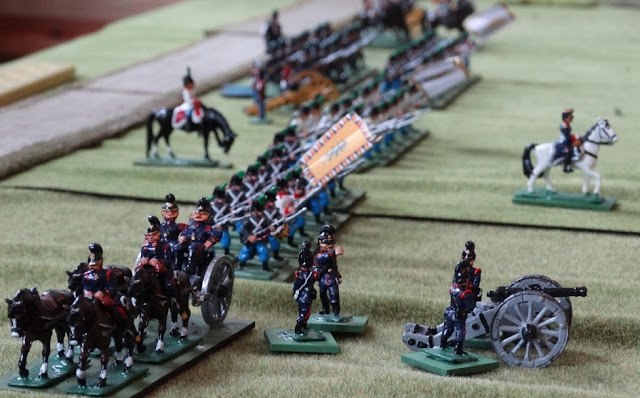 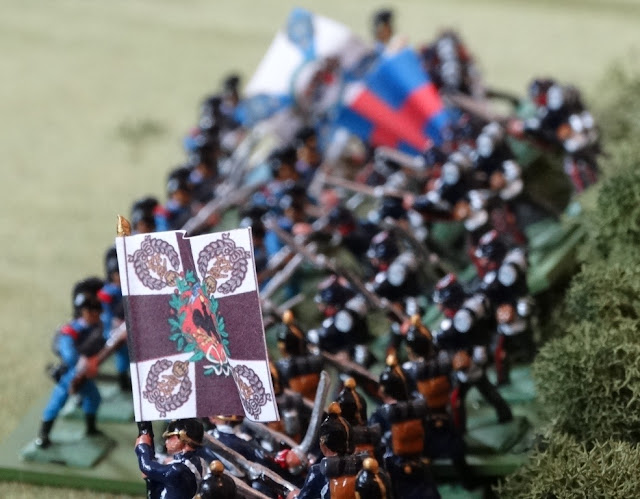 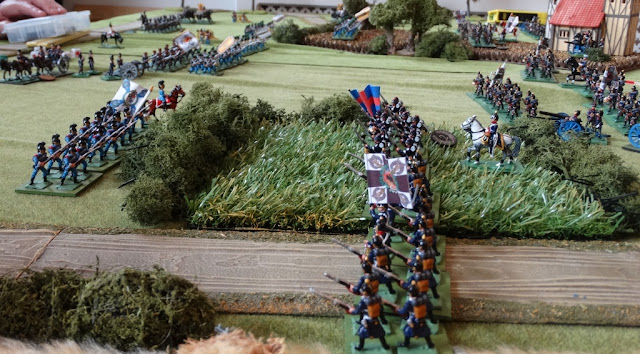 The second Bavarian regiment on the flank is broken through a combination of numerous Prussian Line infantry fire and artillery pouring down on it. 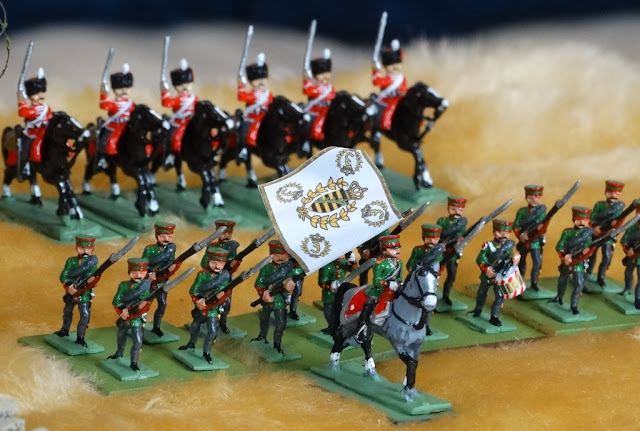 On the other flank the Prussian Dragoons supported by a regiment of Uhlans engage the remaining Austrian Cuirassiers.  What I thought should be a bit of a walk in the park given my superior numbers turned out to be anything but with Bob rolling superb dice whilst mine were truly leaden!

The Austrians held and even won the dice roll but my supporting troops kept me in the contest. 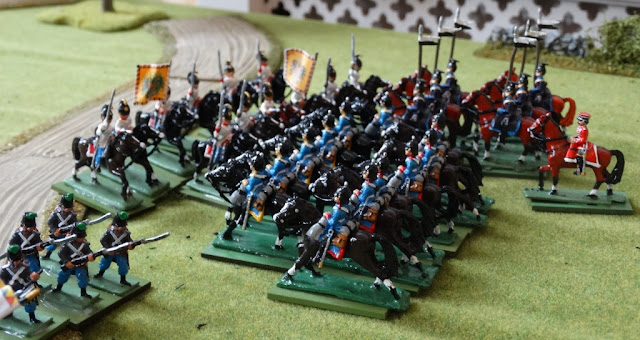 Eventually I managed to best the Cuirassiers but all my cavalry were weakened and not in a position to play any significant role in the game.

On the other flank the Bavarians, with help from a Wurttemberg regiment managed to break the Prussian landwehr. 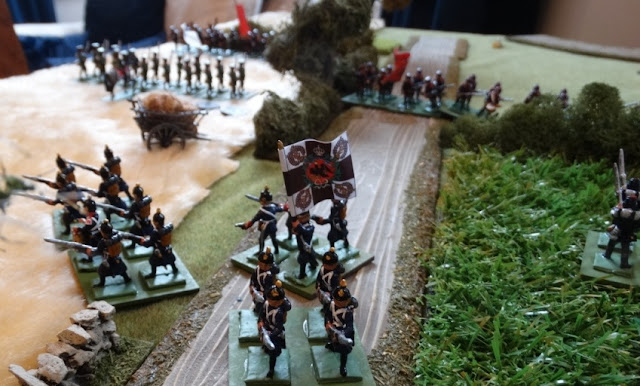 The Saxe Cobourg troops delivered a bayonet charge on the Wurttemberg infantry surviving the closing fire and pushing them back. 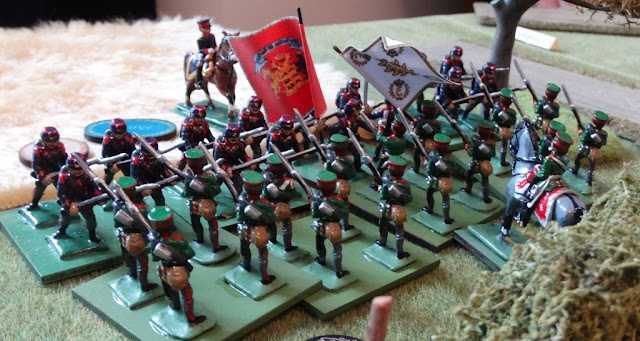 In the centre the Austrians outnumbered the Prussians but despite the Austrians bringing their guns into play the line held for a while,  but then the inevitable, the first Prussian line infantry broke and fled. 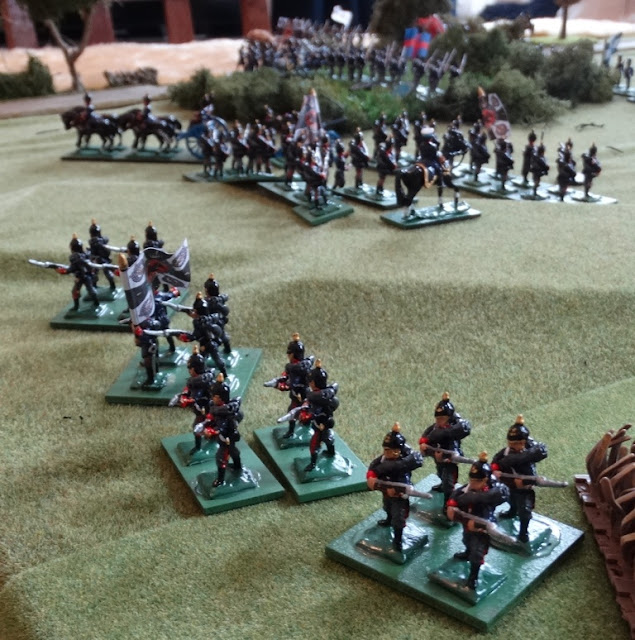 Whilst parts of the Prussian line held, the writing was on the wall, the Austrians still had some fresh cavalry and although both the Bavarians and Wurttemberg brigades had suffered, more Austrians were moving forwards and the rallied Jaegers added to their numbers. 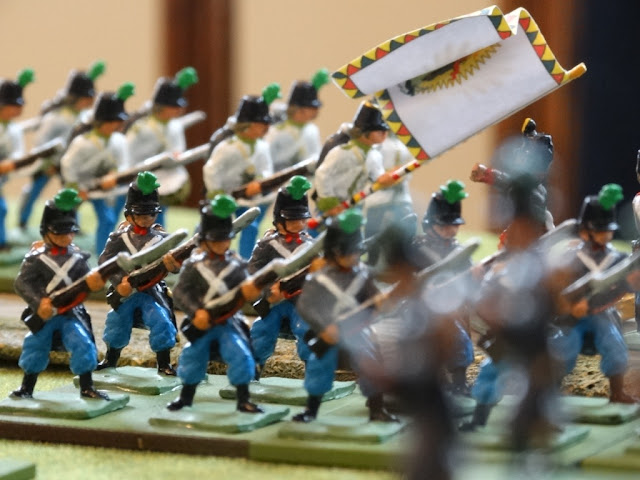 The Prussians were obliged to pull back leaving the Austrians victorious.

An enjoyable game, as always there where  a few mistakes with the rules, but it all balanced out.  The Prussians and their allies need a bit of a recruitment drive and even giving them a bonus when firing didn’t offset the disparity in numbers, so it’s back to the converting and painting table!