28mm Pike and Shotte - The Portuguese take on the Japanese

Having used an earlier item to talk about the game we were going to play a gap in the calendar meant that we actually managed to play the game fairly quickly after I saw the table for the first time.

The object of the game was to take and hold a hill on the centre of the table.  We used centimetres rather than inches for movement, but retained the ranges in inches - made sense to us in terms of the game play.

So here is the AAR.  I took on the role of the Commander of the Japanese forces - the main Warlord and Bob commanded the Portuguese.  I diced for my command level which could have been 8 or 9, but I of course only managed to get an 8.  Bob also commanded on an 8.

Despite these high command totals the game got of to the usual sluggish start with 'brigades' (loose expression for the 3 Japanese Warlords and the Portuguese groups) spending time just looking and discussing the meaning of life. Only my Asigaru; some unarmoured peasants; some even worse peasants; a unit of archers and some fanatical samurai on my left flank moving forward supported by my cavalry on the extreme left.

Bob's cavalry advanced and after 2 moves of doing nothing, so did his pikes and arquebusiers (very slowly).  Bob's cavalry then just stalled and sat watching my infantry advance. 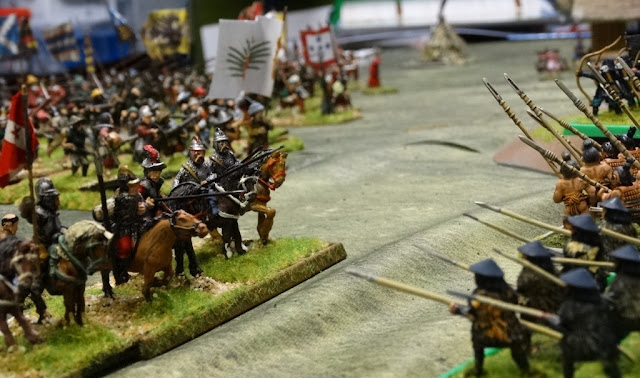 After a bit of a chat we agreed that if they were going to just sit there and with a unit of fanatical Samurai as part of my force it was not unreasonable for these fanatics to charge the stationary cavalry.  So that's what I did! 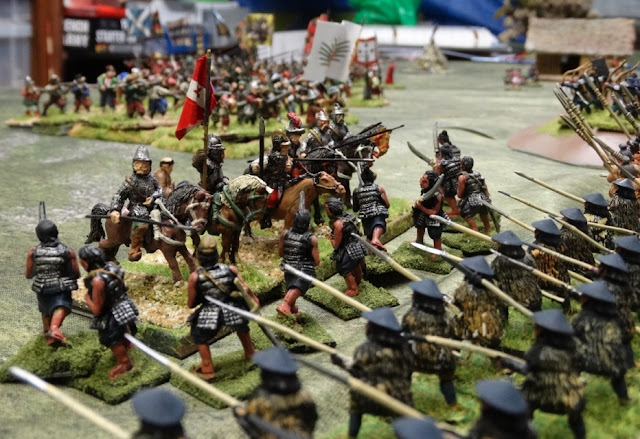 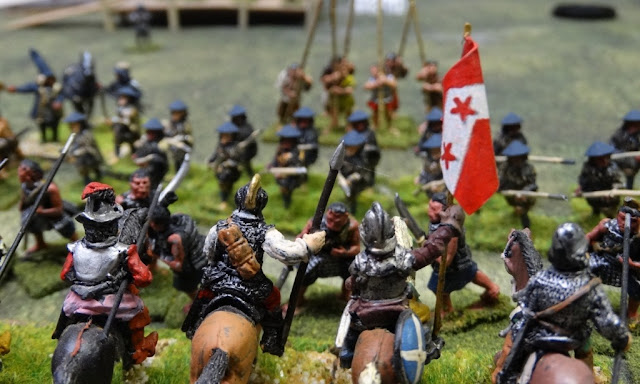 The cavalry did better than expected but lost the combat, the Samurai having 4 units in support to the cavalry's none.  The resulting Break Test saw the cavalry roll bad dice, break, and leave the table. 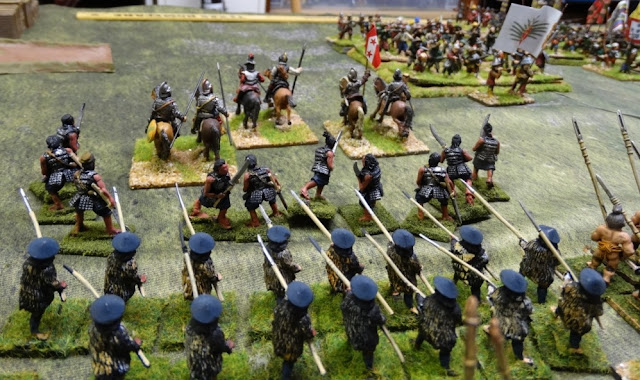 In the centre, my brigade including Samurai archers, more ordinary archers from both the left and right flanks managed to scale the hill and take up position. 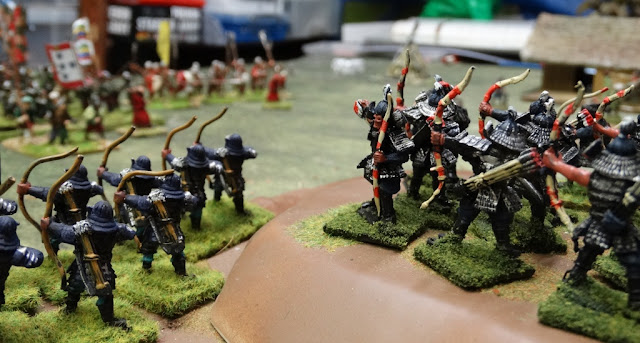 Whilst all this had been going on Bob had been quietly unloading 2 of the ships guns and taking up position.

I fancied my chances with a charge by my Samurai Cavalry to get at these gunners. 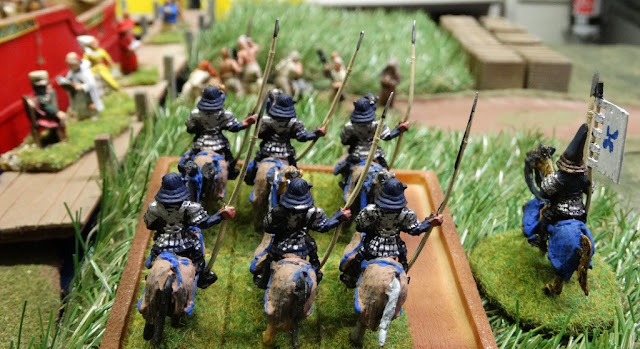 My charge failed and the cavalry suffered.  Not badly but were forced to retire.  They then took another hit in the next round and I pulled them back out of range and they played no further part in the game.  This left the guns free rein on my infantry who possessed no weapons to return fire .  Fortunately, their fire proved annoying but on the whole ineffective.

At last Bob's advancing infantry came in range of my bows. 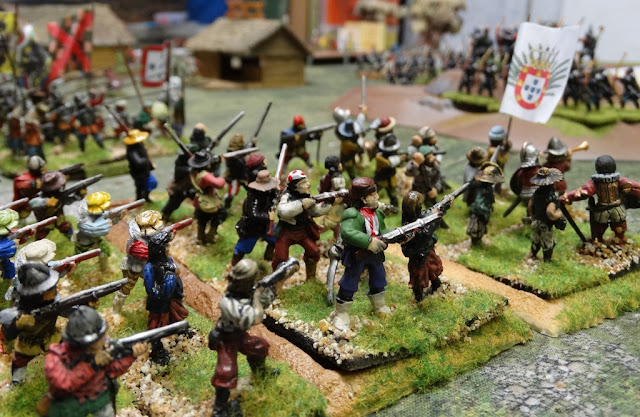 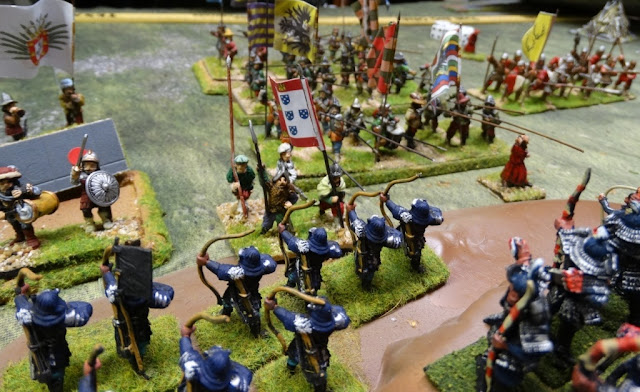 The Samurai archers delivered a devastating volley on the first of the advancing pike units with 3 sixes! and further hits from the other supporting archers saw the pikes stopped in their tracks.

On the right Bob moved forward with a 'brigade' of heavy infantry with two handed cutting weapons.  We didn't have enough units, so we had to 'imagine' the other 2 supporting units. I wasn't worried as I had my Monks who were equally fierce-some! 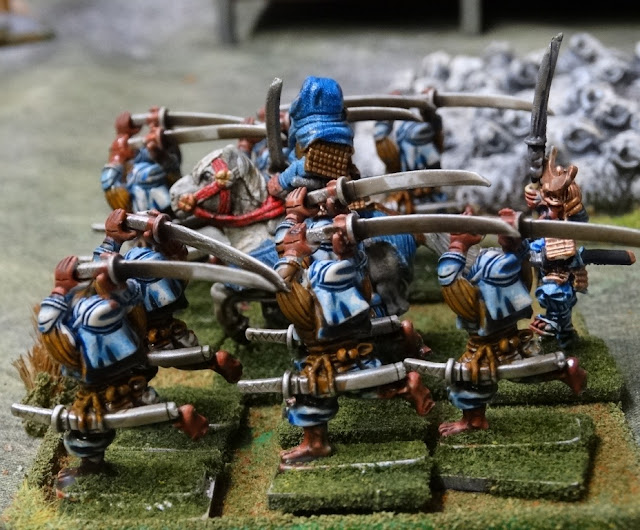 These boys would ignore everything until they became Shaken! 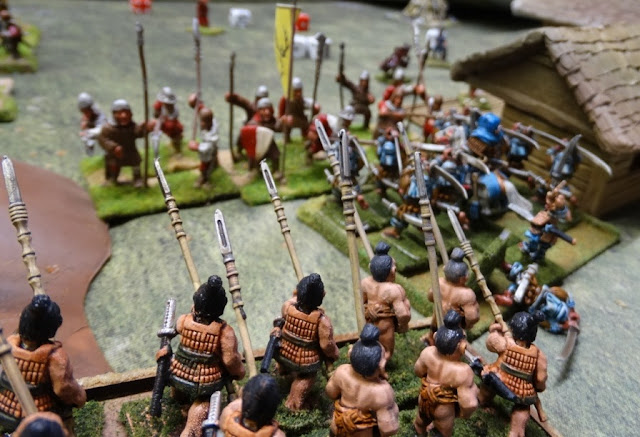 First round went to the Monks causing disorder but not breaking Bob's infantry. No problem I thought it is only a matter of time.  Oh yes, time was all it took.  Bob rolled 4 sixes!! added to the casualty they had suffered in the first round and the Monks were shattered and fled the field!  All in the space of 2 rounds! 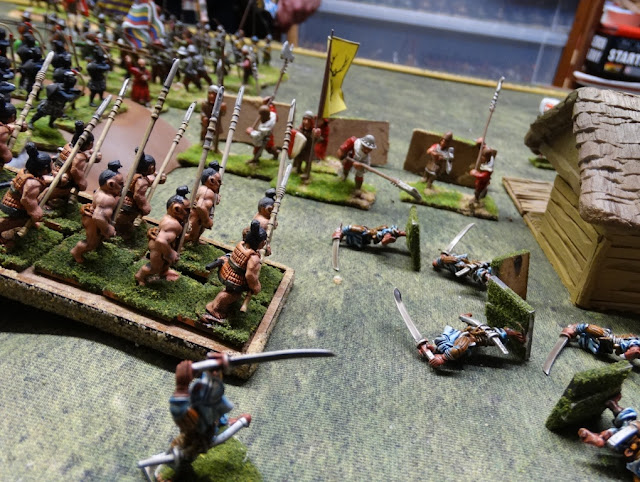 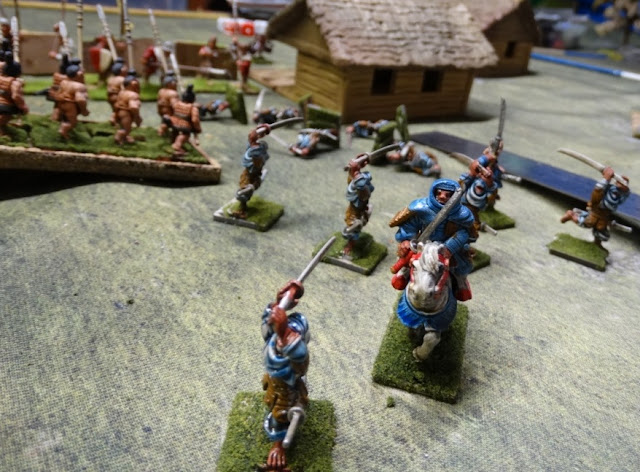 Somehow, the peasants supporting the Monks managed to survive their Break Test and were left standing as 'the end of the line' and facing Bob's heavy infantry.  Disaster loomed!!

On the left in the meantime Bob had managed to deploy his arqubusiers and I was starting to take the odd hit on my Asigaru and peasants. 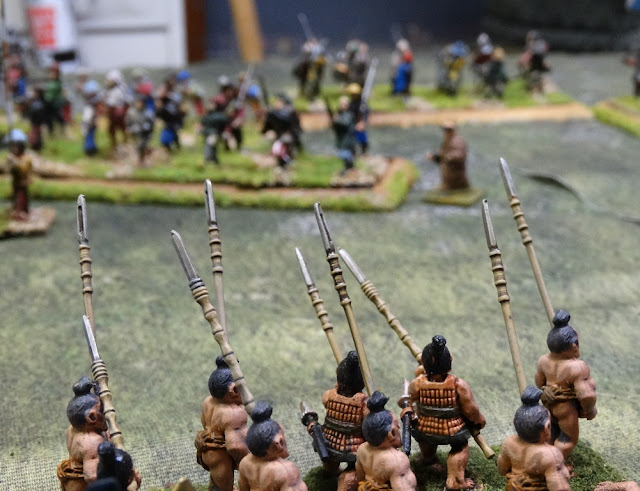 My archers on the hill came to the rescue inflicting the odd casualty here and there . However, I couldn't just stand and take hits so my infantry got to grips, the fanatical Samuari coming to the fore again. 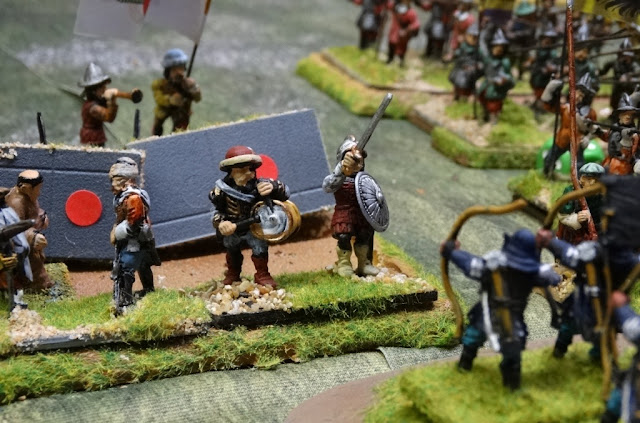 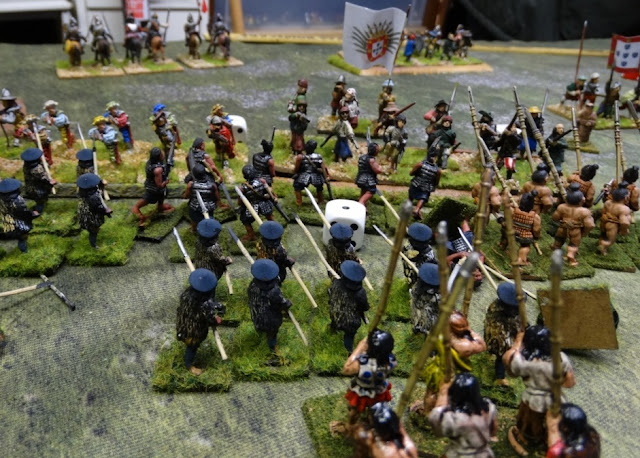 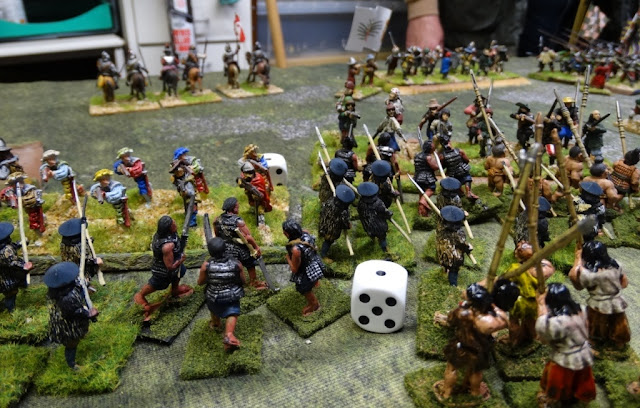 I didn't have it all my own way and the melee's were close I only won them because of the numbers of supporting units.  One unit of Bob's unit finally broke, thanks to some earlier casualties caused by my archers.

But this seemed a side show to what was happening on the other flank.  With my Monks disappearing into the sun set, Bob had heavy infantry and pikes against my lowly peasants and archers.  Forward came the heavy infantry into a hail storm of arrows 3 hits and no saves.  I then managed a Blunder Test which sent my peasants forward fortunately just the one move and Bob did the same, this time charging forward into them. 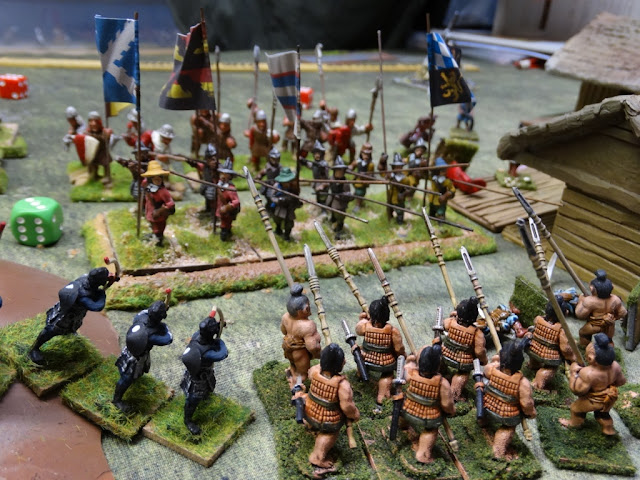 Heaven know how, but the dice were with me another kill on the heavy infantry and no killing blows on my peasants spelt doom for the heavy infantry.  They failed their Break test, as did the supporting unit and with one unit already broken and leaving the table the 'brigade' was beaten.  Leaving the Japanese masters of the field.

The archers on the hill made all the difference.  They managed to stop the advance of the Portuguese infantry who couldn't get to grips with them and whose slow start gave me the chance to get to the hill first. When the Monks fled I think we both thought it was over for the archers on the hill as they were ripe for the taking.  But from 4 sixes to wipe out the Monks to not a single telling blow on the peasants was just amazing (poor dice and good saving throws).  Victory from the jaws of defeat!

Not sure I understood some of the Japanese weapons or knew how to pronounce them and Bob forgot to get his sailors of the ship which was an extra unit that could have been in the game, but it was good fun and a chance to use figures in a different scenario.

The bulk of the Samurai are Warrior 25mm figures, supplemented by Dixon, Westwind and Black Hat figures. The civilians are from Japanese and Vietnam ranges. The gate is from Grand Manor and the screens are paper downloads from Wargames Vault. The deck, ramps and dock are scratch built by Jack.

The Portuguese are Bob’s TYW army. The Portuguese standard Bearer and escort are Conquistadores from Outpost Wargames and the cavalry are assorted border reivers. The ship’s guns and the crew who never got off the ship are by Newline Design.

The Portuguese stats were taken from the Italian Wars lists, while the Samurai, Monks and others were all found in an army list on the Warlord Games’ Pike & Shotte forum.