As part of my voyage of nostalgia in the loft following the discovery of my old Airfix Ancient Romans and Britons I came across all my old WW1 and WW2 ships and planes.  I remembered some fun games using a computerised set of all called ShipBase III Tactical Naval Combat 1890-1945 by David L.Ferris and John C. Garcia and published by ArmourSoft.  Anyone else remember them? 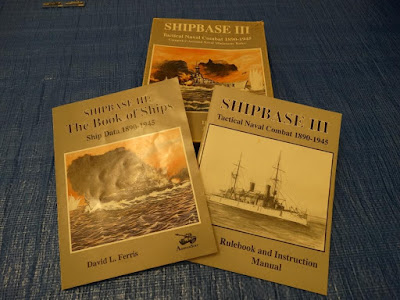 I knew I hadn’t thrown them out and set out for a  further search.  I came across them in the bottom of a box of other bits.   Originally published in 1993 Bob brought then in about 1998 from the US. They came with both a 51/4 inch and 31/2 inch discs!! Cutting edge at the time. 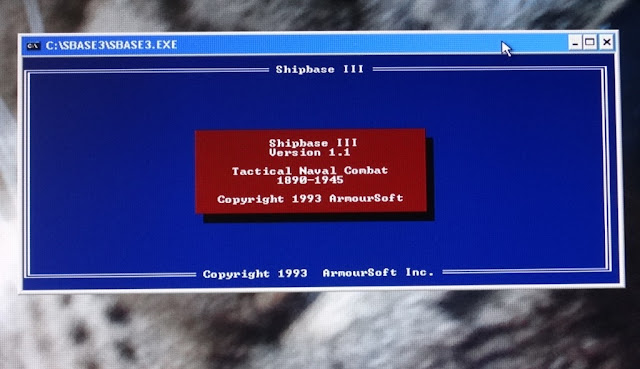 The box also contained all the counters to enable you to play all the scenarios built into the programme., The Book of Ships Ship Data 1890-1945 which has ship data for ships from different nations Great Britain, Germany, US, Japan, Italy, France, Russia/USSR, Spain, Greece, Norway, Turkey, Chile, Denmark, Sweden, Brazil, The Netherlands, Austro-Hungary and Argentina.  It also has Generic Freigther and Tanker Entries as well as some Aircraft Data. 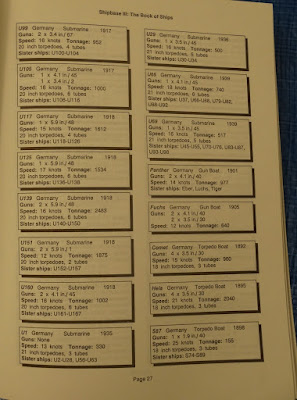 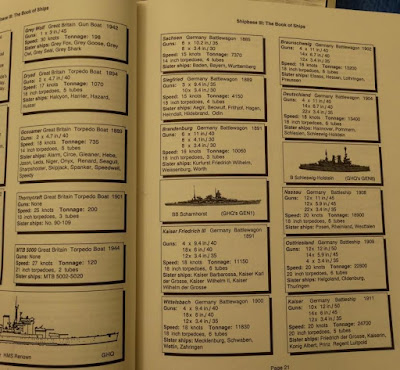 I recall we played both WW1 and WW2 games.  The rules allowed aircraft to take off and lad on carriers, land based bombers, torpedoes, subs and Combat Air patrols over your fleet.

Having found everything and having an old Windows XP with a floppy drive we decided to give them a go.

Their are six scenarios built in - Santiago 1898; Tsushima 1905; Jutland 1916; Denmark Straits 1941; Coral Sea 1942 and Komandorski Islands 1943.  You can also create and save your own scenarios. The system can take into account most of the usual factors affecting naval combat such as smoke, ‘relative’ angles, salvo chasing and the like. The turn sequence follows an intuitive order of movement, air ops, gunnery, torpedoes and end-of-turn status. Scales are completely adjustable making the game easy to use for any sized ships, table or floor space

The problem with many computer rules at the time was that you had either to come round and look over the shoulder of the person inputting the data or get told what the results were which was a bit of a bore.  Using another monitor or TV meant CRT units and a lot of muscle to move them about.  Fortunately the advent of light weight flat screen meant I was able to set it up so Bob could see what was happening and be more involved.

Basically, we loaded the Jutland Scenario which has all the Battleships and Battle Cruisers  used by both sides (not Cruisers and destroyers) rather than create our own scenario for this test.  We then set out about 15 ships a side and just choose them from the list of ships. The machine was so old I couldn't  work out how to do screen shots at the time so here are some pictures of what Bob could see on the monitor. 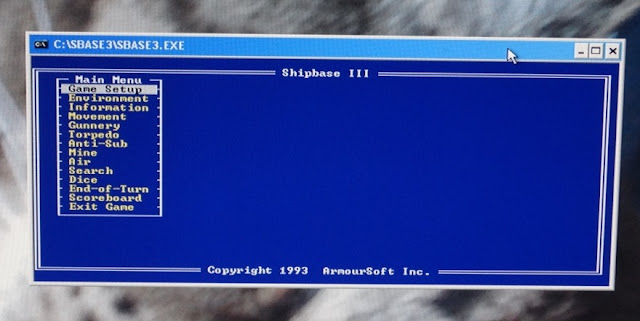 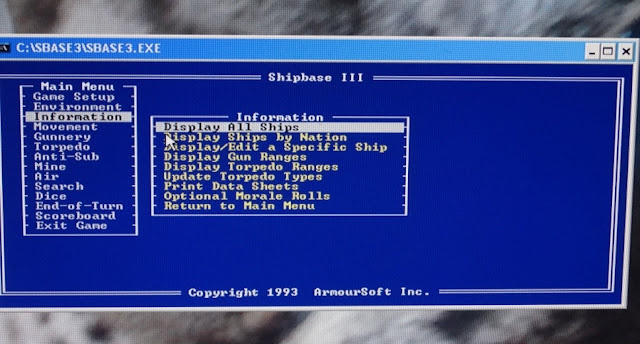 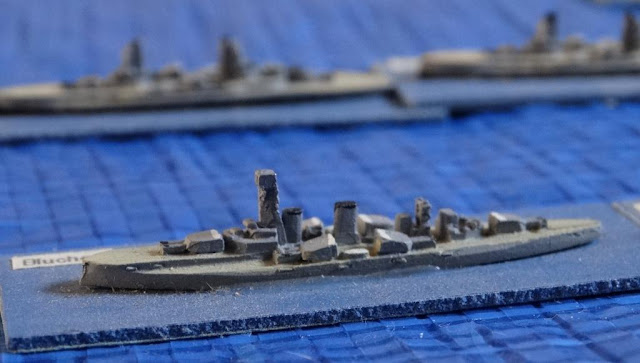 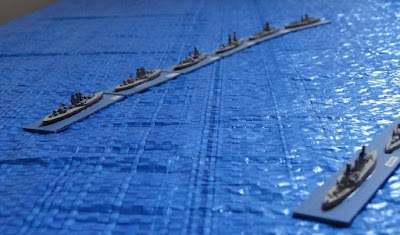 This 'game' was more about seeing if the rules still worked and we were happy with them, rather than a 'wargame' in itself. Still there was some competitive firing with the German BC Derfflinger and my own HMS Valiant coming in for some serious concerted fire from numerous ships. The computer keeps a track of the ship that you have fired at and after a couple of shots once you select your ship it puts the target at the top of the opposing ships so that you don't have to scroll through a long list.

Just for the fun of it - well it wasn't much fun for me - we tried out the torpedo rules. The Heliogoland launched torpedoes at the poor old Valiant causing her magazine to explode.

Their are Optional Morale rules which we also tried and they seemed to work, the Derfflinger was forced to withdraw with 56% damage which seemed fair enough.

The rules worked and it was enjoyable enough and fast moving to make us think we should try out our US and Japanese Carrier fleets again.

One problem was trying to print out the ships data. This programme was set for using the old LTP ports.  So without buying an old serial/parallel printer I was stuck.  I have used screen prints by loading the game using DosBox (a free programme you can load which enables you to run old Dos based software).  This works really well, dare I say better than the old XP machine and looks better on the second monitor/TV.   So I am going back in time to 1998!! and we are going to try WW2 Carrier Actions.

I still have Follow The Eagle and the Universal Skirmisher  old 1990s DOS based computer rules and both appear to work using DosBox.


Unfortunately, the ShipBase III rules are no longer available but a 'beta version' of Shipbase 4 is available to download for free at HTTP://www.irvania.com/games/navalgames.htm. This has 2 built in scenarios Lissa 1866 and Yalu 1894.  The Yalua scenario seems to work okay, but the guns on the Austro-Hungarian fleet don't seem to register any hit damage.  You can still create your own ships and scenarios. There is also ship data for a number of other nations already built in.  The ramming element of the rules also worked.   There are no instructions with these rules but they are pretty intuitive.

There are also other interesting 'naval bits and pieces' for free.  You can also download a WW2 land based game 'TankBase' which follows a similar style at HTTP://www.irvania.com/games/tankgames.htm.  the only Scenario that is loaded is for Histricon 1994!  It has infantry, Tanks, anti tank weapons, infantry and vehicles. If you play around with the loaded game you can sort of work out how things work.  I am not a fan of land based WW2 as it always strikes me as too complicated, but this seems to have some attractions.