We like to try to vary our wargames, rather than just two or more sides slogging out, although that is fun too. Browsing the web as you do, and interested in the American Civil War as I am, and looking for unusual potential wargame scenarios as I was, I came across references to Union forces attacking Confederate salt works along the coast and how important salt was.

"Salt is eminently contraband because of its use in curing meats, without which armies cannot be subsisted" - Gen. William Tecumseh Sherman - 1862.

Jack Alexander had just tried his hand at making a 28mm ACW ship so we had the ingredients for a game. 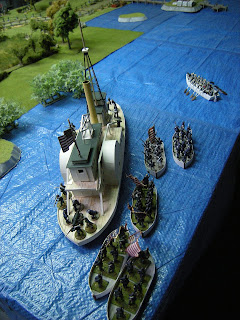 The idea was for the Union to launch a raid on a small Confederate salt works.