Our first foray is entitled ‘Converted from Perrys’.  Like many wargamers of a certain age I started with Airfix and built up largish and Confederate forces.  I had these figures for the better part of 30 years and in the last 20 years probably only used them once or twice and whilst I would get them out now and again to look and wanted to try the civil war again, I never got around to it.  Then out came the Perry’s ACW plastic figures.  Bob bought some first to do the confederates and they looked interesting so Jack and I thought we would give them a go and starting painting the Union troops.  These figures are superb and better still brought me back to converting figures to produce troops that weren’t available and to be honest I probably was something of a plastics snob and wanted to do as much without buying metal.  Some might also call it being cheap.

Let me say I am not a modeller and what I have done is easily within the range of the novice.  I do not pretend that these are the greatest conversions in the world and I am sure others have done better.  But here are a few tips and ideas.  Firstly, the tools you will need. A hand twist drill; a tube of green stuff or similar or melted plastic sprue; a scalpel and plenty of spare blades. The bases for a number of these conversions are the 2 infantry figures loading muskets.  These are the figures that I like the least. 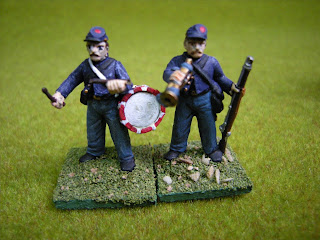 They can be used to make dismounted cavalrymen, artillerists, musicians and standard bearers and a whole lot more. 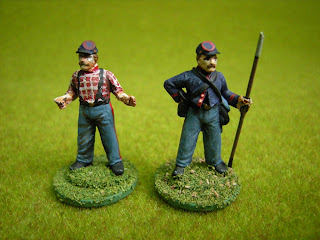 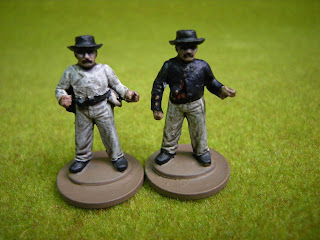 These figures I use as sailors.

You can use arms from the cavalry set to make a simple dismounted bugler for your infantry regt, just stick it onto the figure in place of the standard or musket 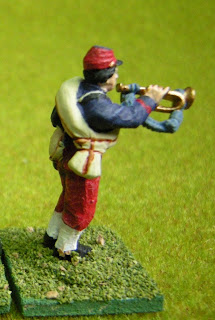 More on dismounted cavalry in part 2