Having failed in all my assaults, the inevitable counterattacks came from the French.  First some devastating Mitrailleuse fire and artillery combined with rubbish dice saw one of my already weakened Austrian regiments break and flee their earthworks. 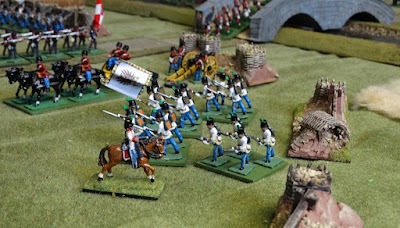 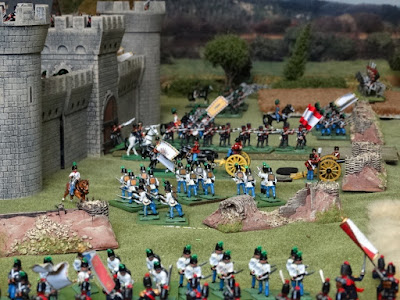 Then Bob wheeled his fresh Infantry regiment into the melee 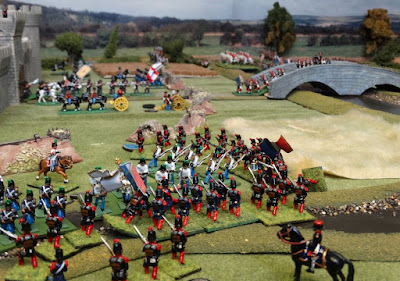 Whilst I managed to force one French regiment to break, my infantry collapsed with one regiment destroyed and the other flung back. 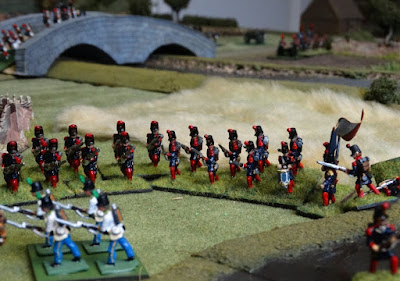 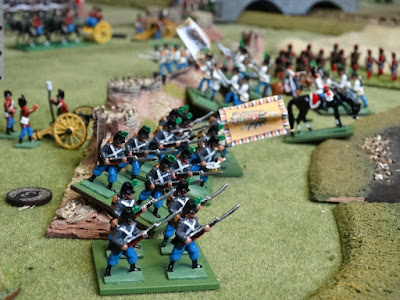 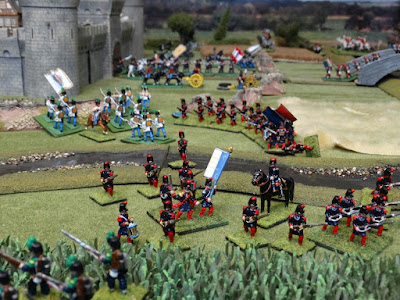 The Austrian commander whose horse had been taking a drink looked up to find all his troops gone! 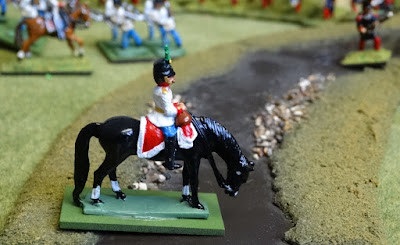 Worse still my gunners suffered casualties and fled.  My left wing was in a real mess all of my own making! 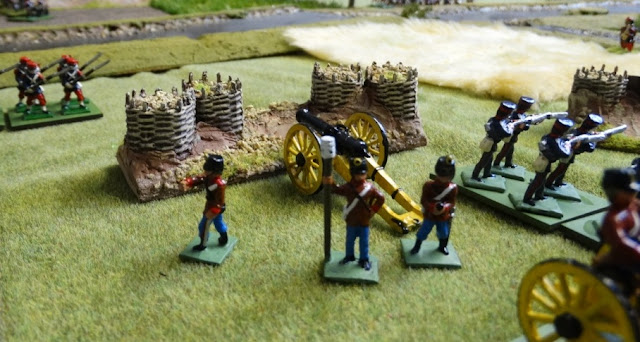 On his right Bob charged my Cuirassier regiment with a large body of Spahis and drove them back.  Fortunately I had been able to raise their morale with Rally to Me orders so they at least survived but were weaken again!  They got caught again in the Spahis Sweeping Advance but managed to cling on but were thrown back again. 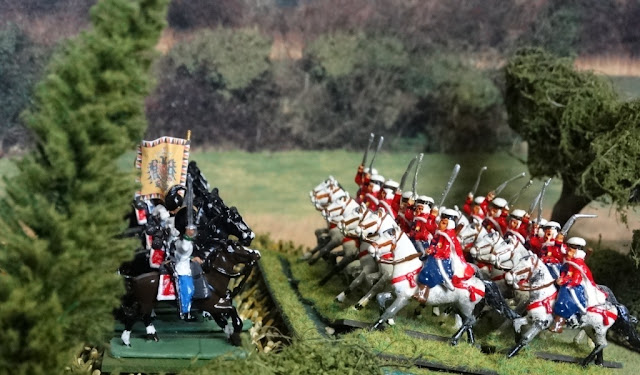 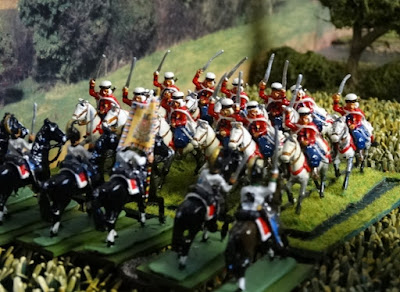 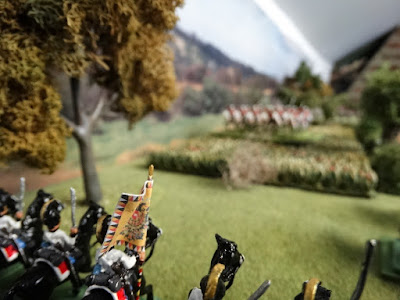 To make matters worse the Carabineers on Bob's left were refreshed and charged my Hussars.  This time things didn’t go so well and the Hussars broke and ran. 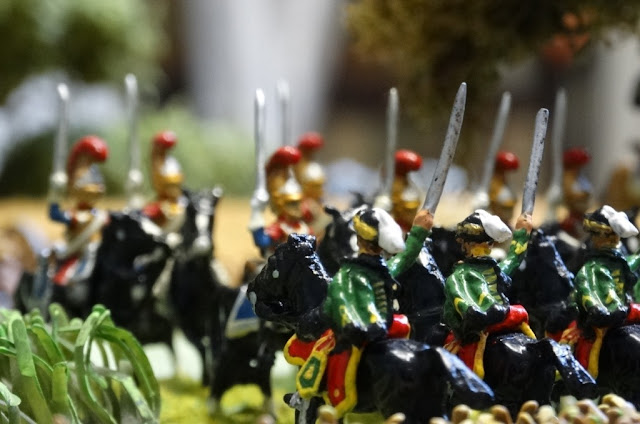 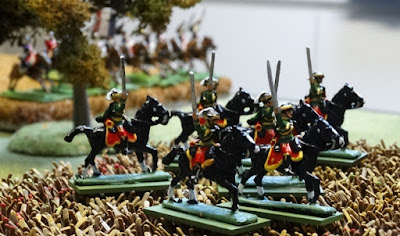 It was definitely looking up for the French.  The Zouaves came back into the game, the French centre brigade suddenly got a move on and crossed the river seriously reinforcing the Bob’s left flank and the Guard impressively started to make progress across the river.  Slowed only by some fire from the town battery. 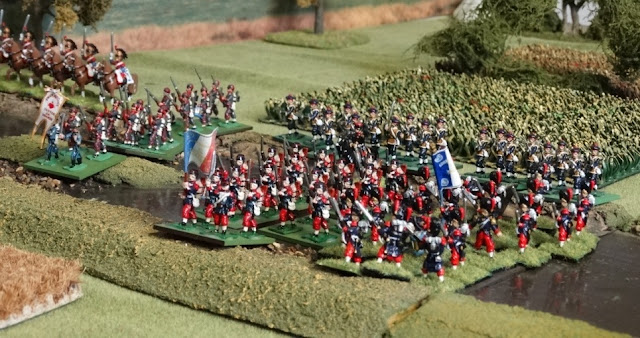 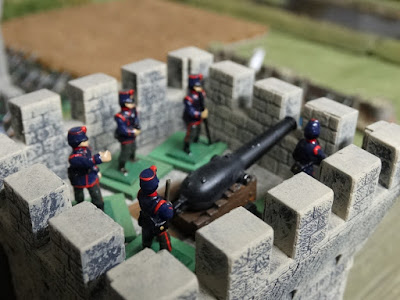 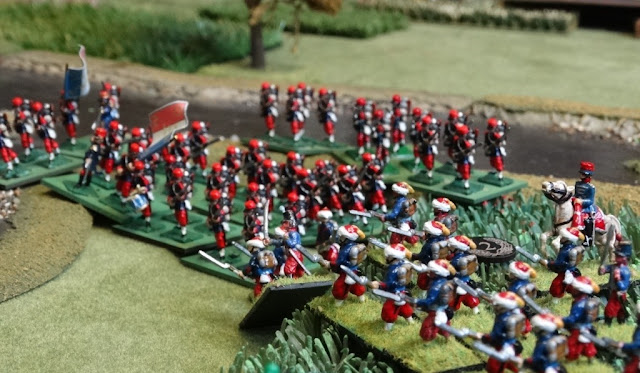 My only option was to divert my allied reinforcement to the now empty Austrian trenches before Bob could get to them.  The Hesse Kassel Hussars threatened the French line forcing them into square but suffering casualties as a result. 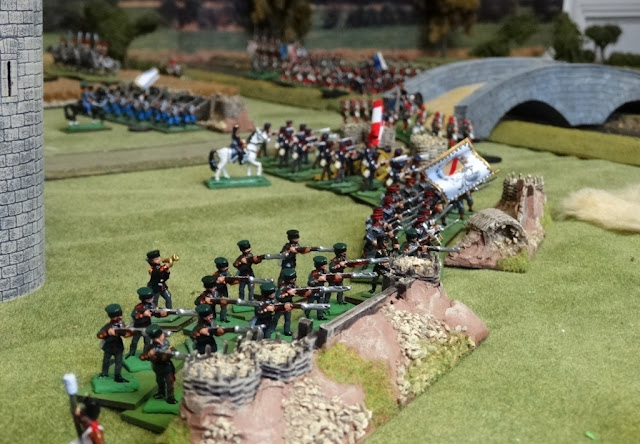 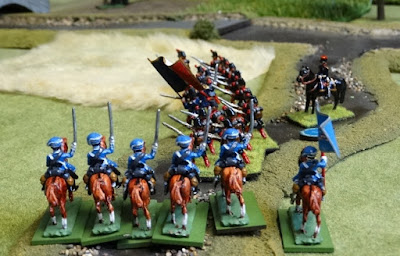 With my earthworks now restocked I felt that at least I had managed to shore up the game.  I brought my last Austrian regiment out of the town. 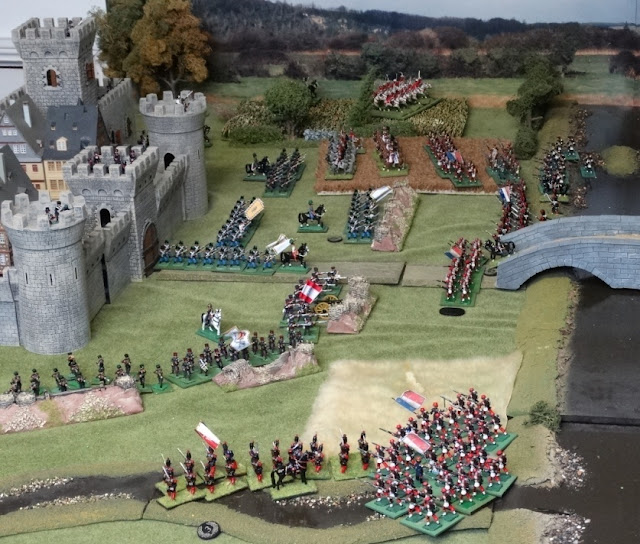 I managed to attack the Spahis with another Cuirassier regiment and this time it was the Spahis turn to break and run. 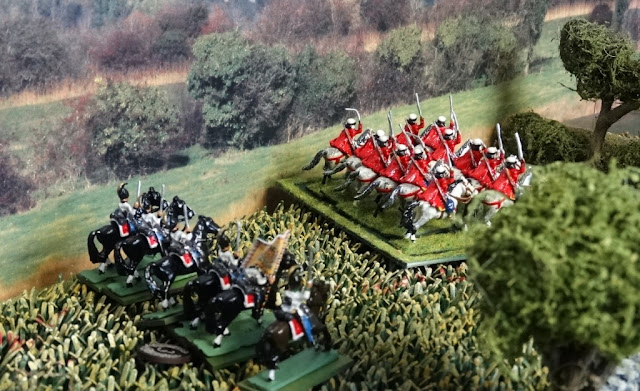 Then something really interesting happened.  Much to my surprise Bob decided to charge my Jaegers with his Cuirassiers. The Jaegers failed to form square and were disorganised and despite some really pathetic closing fire they actually managed to hold and the Cuirassiers who in turn bounced off!!  The god of dice playing a really big part! 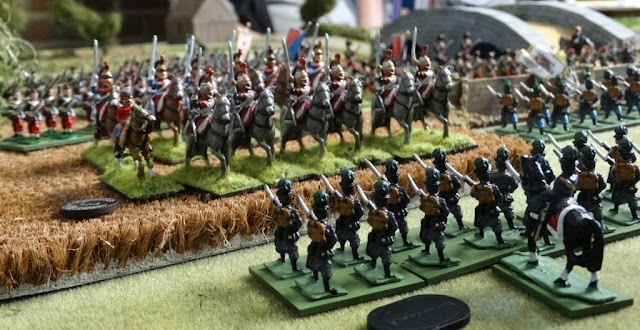 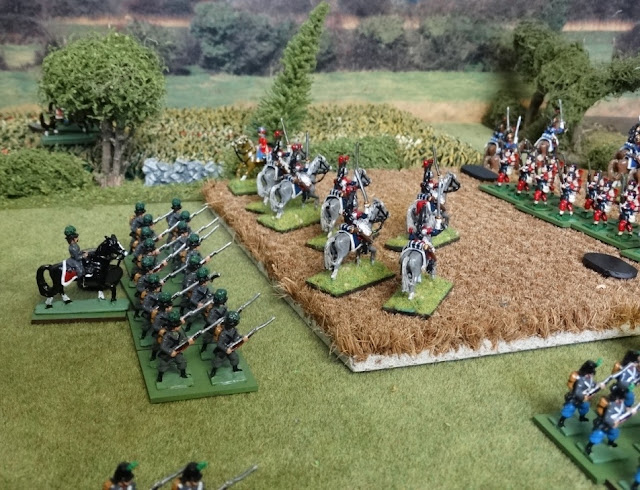 ‘Day 3’ ended with an assault on the Austrian works by one of the Guard units and an infantry regiment, fortunately the push back of the Cuirassiers muddled the advance of the rest of the Guards brigade.  I managed to beat off the line regiment, but the Guard are still there! 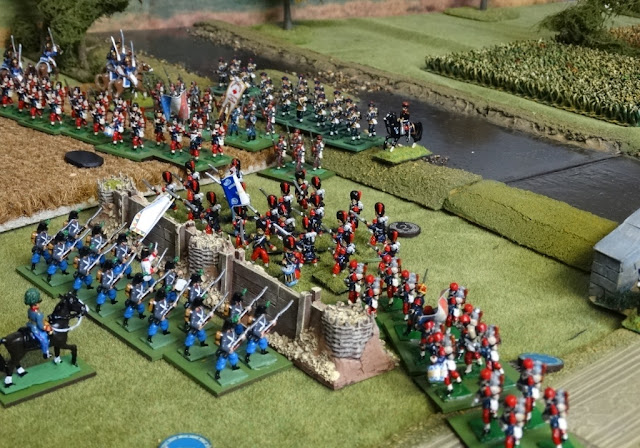 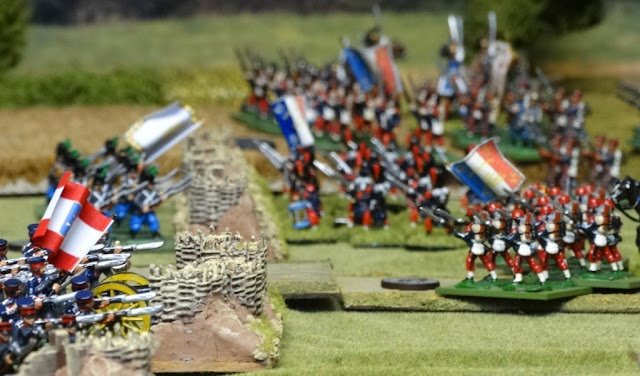 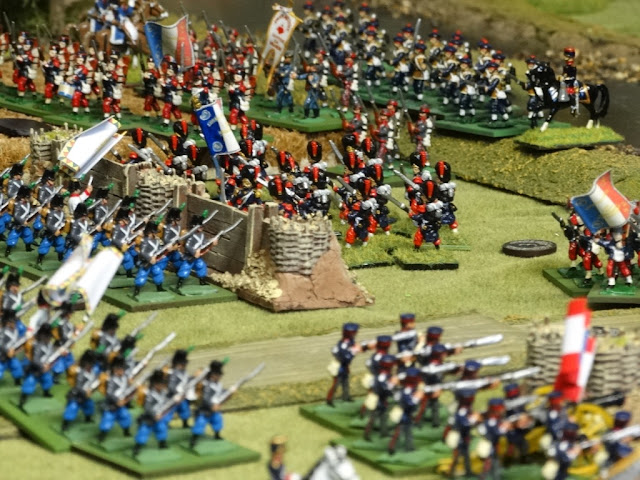 On my left Bob managed to get his Dragoons into action at last with an engagement with my 12th Uhlans resulting in an inconclusive outcome. 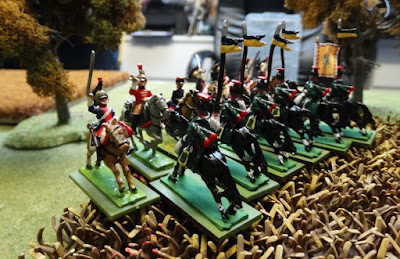 We decided to go for an unprecedented 4th day which will make this a 12 hour game!
My forces are now spread thinly as I have all the earthworks to defend.  The French are beginning to concentrate their forces and you can see how they could overwhelm individual elements of the Austrian and allied army. 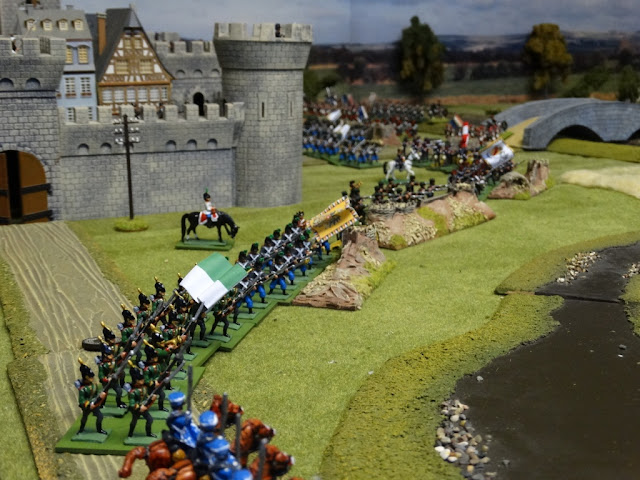 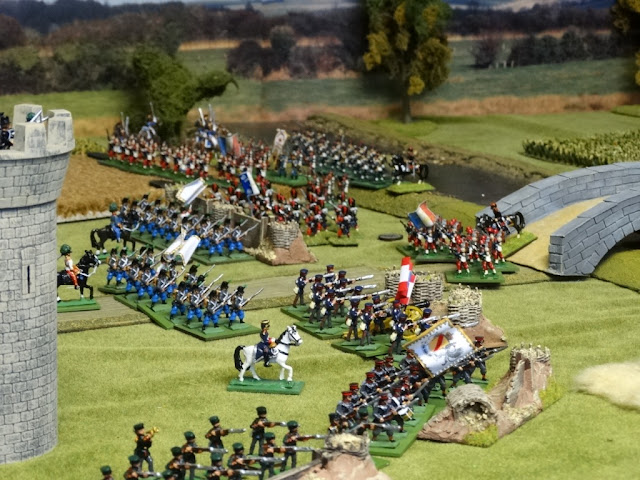 The bright spot for me is the loss of Bob’s Cuirassiers and Spahis on his left.  Whilst my 3 Cuirassiers regiments have been weakened they are still there and represent a menace to the Guards brigade.  Fortunately, all of Bob’s mitrailleuse have either been destroyed or have jammed and his artillery no longer has any targets except the town walls.  For my part I have one battery left in the field.  The Town battery has lost all its targets except the distant French artillery as we felt the French infantry were too close.