I am off to the States on Friday so this is my last post until I return in October!

Went over to Bob’s to play our first game in what seemed like an age, a bereavement in my family followed by holidays and hot weather turning his garage into a stage set for Bridge on the River Kwai (kept expecting Alec Guinness to emerge at any moment) meant that the months had rolled by.

Bob had been busy on his French and Russian Napoleonic figures and so we decided that they deserved an outing.  As Bob pointed out if he put them all out they would stand shoulder to shoulder from one edge of the table to the other so we decided to each have reserves that would come onto the table in move 3.

Bob commanded the French and I had the Russians.  Overall Bob’s Brigade commanders were much better than mine with two having command scores of 10 and another with a score of 9.  Oddly in fact this proved to be a disadvantage as you will see and left us puzzling about whether we had got the rules right. 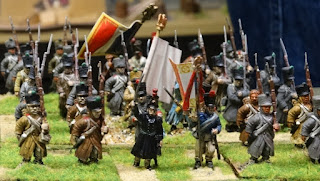 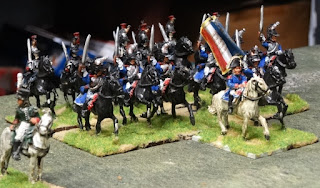 The Russians had less cavalry to start with but had two brigades of infantry, a regiment of Cuirassiers and a brigade of lancers, 2 field batteries and 2 horse artillery batteries.  They were given the additional moral support of Monks and a superb Russian Church built by Jack which inspired the local peasants to heroic levels (and frankly silly success). 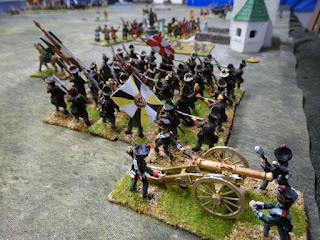 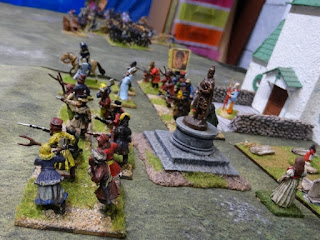 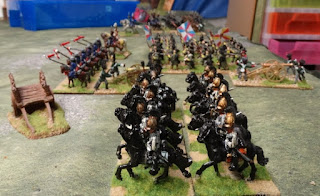 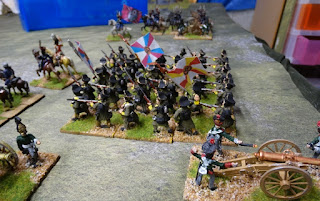 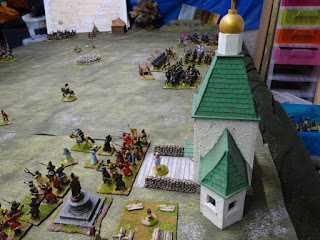 The French had the initiative and immediately Bob threw forward his lancers on the infantry brigade to the front hoping to catch them out of formation.  Unfortunately, the charge fell short but we felt that the Russians would try to make square given the proximity of the lancers.  Each regiment in the brigade tried to form square, one managed it one didn’t and the other managed a blunder test and fled the table! Not a good start. 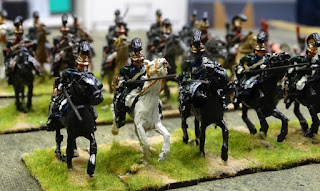 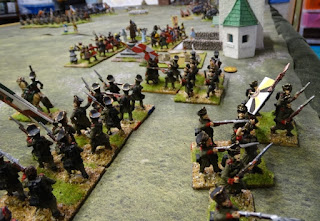 The centre units all advanced slowly but on the right the Chasseurs pushed forward, but not enough to make contact with their Russian opposite numbers.

The unfortunate lancers not only found them short of my infantry but in close range of my artillery who together which a ragged volley from the disordered infantry forced them to halt and become disordered.

On my right I charged the French Chasseurs with my lancers pushing them back and destroying them in the follow up. 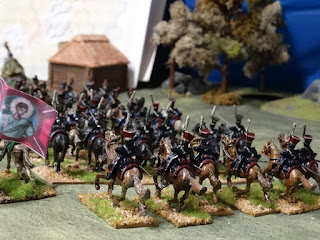 In the centre my Cuirassiers advanced forcing the infantry into squares for safety. 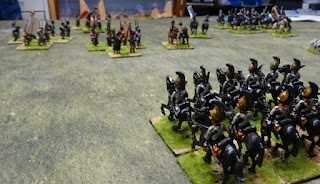 The next move saw Bob bring on his reserves, more heavy cavalry; the Guards; another brigade of infantry; line lancers together with a field artillery battery. 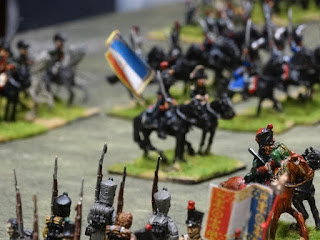 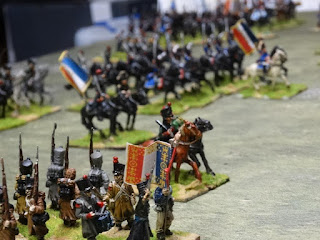 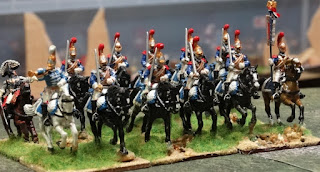 And here’s where the problems started with the French high command levels, only needing a ten.  Bob started to get three moves on an almost consistent basis.  We were playing 50% movement rates which left units just short of contact with the Russians but at close range for artillery and infantry fire but unable to fire.

On the left the line lancers were stuck in front of the Russian lines with a hold command.  It seemed a bit of a nonsense for the whole brigade to be standing still so we agreed that they the front regiment who had suffered casualties move but the other 2 regiments could.  This didn’t help much as one failed the command and the other got a blunder test moving it to the right one move.  So instead of attacking the peasants the road at right angles to them.  The Peasants were deemed to be freshly raised and had to test.  Inspired by the Church and Monks and threw a six, giving them an extra hit dice.  Two hits (one a six) on the lancers and neither saved and they were disordered, to make matter worse the gun was blocked by the cavalry!  Those priests were working over time! 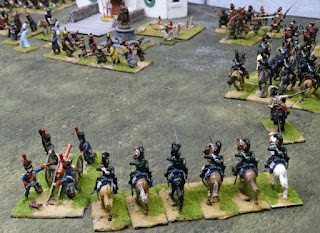 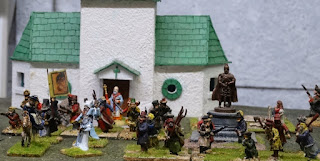 In the centre my Cuirassiers clashed with the French heavy cavalry beat them soundly but lost the melee because of the French supports and were forced to retire. 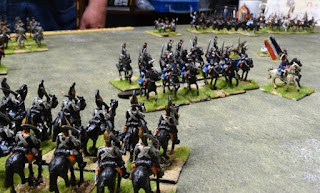 The French infantry formed their lines and with a command factor of 10 swept across the table with three moves charging the Peasants and my Russian Guard infantry.
The Peasants again worked wonders scoring 2 sixes on the charging French infantry, neither of which was saved the Guard also scored but they were saved. The French hit home.  At this point we weren’t too sure what the Peasants should be given by way of hand to hand dice.  We settled on 4 dice given the superhuman guidance they were getting from the Priests and their desire to save the church from the hands of the French.  This resulted in their opponents being thrown back.  We think we over egged the Peasants as this seemed an unlikely result.  Whilst the French unit facing the Guard although losing passed their Break Test with flying colours and hung on in. 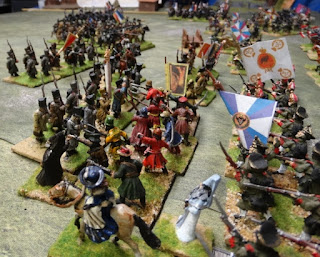 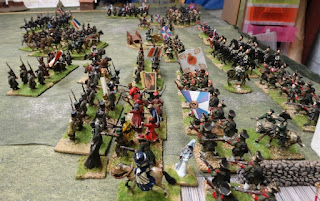 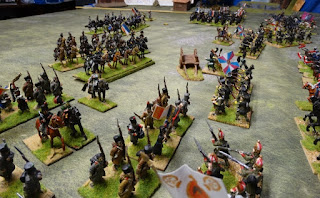 In the centre my Cuirassiers again threw themselves forward charging the enemy lancers only again to win the engagement and lose the melee and flee following a Break Test. 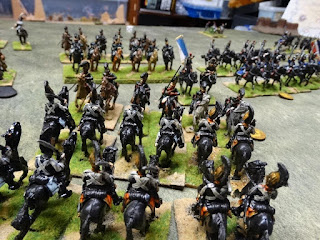 An attempt by the French to rally their lancers on the right proved successful but before they could take advantage more Russian artillery fire and a volley from the infantry who had now managed to form a square was enough to see them destroyed together with the gallant general who had risked all to get them reorganised. 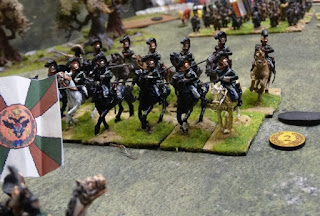 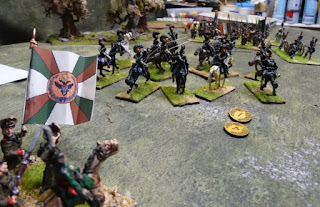 Good through this seemed at the time it merely cleared the way for a brigade of French infantry to advance on the Russians.

On the French left the Guard Brigade which also had a line infantry regiment with them, having a command of 10 got three moves which left them inches short of two brigades of Russian lancers.  We both thought this has highly improbable and frankly daft.  We work on 3 moves and you can’t fire so they would have just be stood there waiting for my cavalry to hit them next go.  We decided that the 3 moves had to be taken but agreed 2 forwards and form a brigade square as part of the third move.  This didn’t help them particularly as it brought them in close range of a battery of field artillery and another of horse artillery.
Their supporting Cuirassiers decided not to move at all which didn’t help! 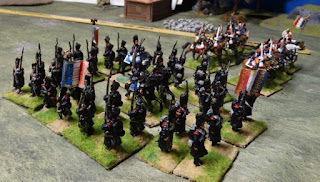 During my turn the Russian Guns opened up on the Guard brigade, and although they only managed one hit, it was enough to require a Break Test.  The Guards failed this getting a ‘4’ after deductions causing the entire Brigade square to flee the field. 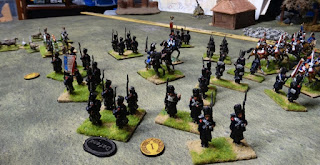 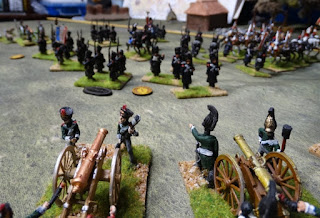 Again the high command score sent infantry forward at 3 moves blocking their own guns leaving them just short of my Russian infantry on the right and their supporting field artillery.  The result saw them taking a hit and fall back as part of their Break Test. 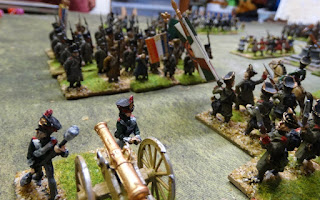 The French infantry and disordered cavalry across the table prevented the French from taking advantage of their remaining cavalry superiority. 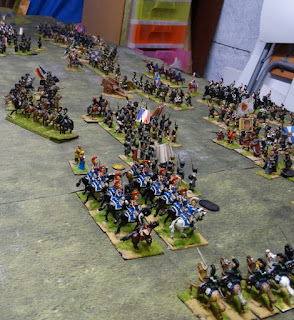 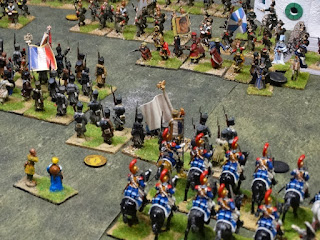 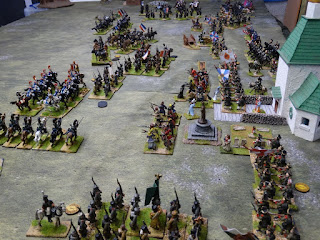 At this point we called a halt to a game which we had played over two separate days a week apart.  Whilst the Russians had seen off the attack, the French were still serious contenders if we wanted to allow a bit of reorganisation.  The Russians had infantry superiority but the numbers of French cavalry presented a threat to manoeuvre anywhere on the table and there wasn’t enough Russian cavalry to see off all the threats.  The problem for the French was the high command levels prevented any real manoeuvring unless they were moving from flank to flank.  Otherwise, they were going straight forwards and falling short bringing them under both musket and artillery fire and unable to respond.  The Russians lower command levels often only resulting in 1 or no moves oddly worked to their advantage.

All the Russians were from Lancashire Games except the Cossacks from Irregular Miniatures; the Peasants from Perry’s; most of the Priest from Old Gory and a beautiful resin figure of priest from V&V Miniatures.

The majority of the French cavalry and guns are from Lancashire Games with a unit of plastic Carabineers and Cuirassiers from Perry’s.  The Infantry is a mixture of Warlord Games - Outpost Miniatures (Old Guard in Bearskins by Perry) Generals on both sides from a variety of sources the Church was scratch built by Jack Alexander