As you may have guessed from reading some of the 'battle reports' I have posted I tend to try different things - Prison Breaks, Salt Store raids involving both naval and land forces.  Some work, others don't.  Sometimes the scenarios are too complicated or the rules don't allow for a 'simple game' in complicated circumstances.

Anyway here is another scenario I tried with a Union attack on a fictious Confederate Town.  This is in 2 parts, 'A Town Prepares' and 'A Town Attacked'.

The town rests on the banks of the River Alexander.  It sits to the rear of the Confederate extreme left wing.  A division of Virginians and Louisianans hold this end of the flank and are faced by the First Division of the Army of the .  Many months of stalemate have resulted in pressure from for action.

The Union have alighted on a bold stroke sending the First, Second and Fourth Brigades in a long sweeping march to come upon the sleepy town  from the south.  The aim to take the town, capture’s its rail line and port and to sweep on to attack the confederate’s rear.

B Gen Doubleday has been assigned the task.  Doubleday and moved his troops with great secrecy and speed.  However, poor roads have meant that his infantry have outstripped his artillery.  Faced with the risk of being discovered, Doubleday decides to maintain the surprise by launching an attack without the usual artillery barrage.  His problem is that a tributary to the Alexander river confronts him.  It can only be crossed by the main bridge or two small fords.  The town itself has been barricaded as a precaution.  Nevertheless he launches his attack giving the 84th New Yorkers supported by two regiments the task of capturing the bridge, whilst attacks are launched on both fords.

Unknown to him, the confederates are rotating their troops through the town to give them some well earned R&R.  Doubleday’s attack coincides with General Walker himself being in the town together with 2 of his Virginian regiments and an artillery battery.  General Walker is visiting the  town's Governor who is celebrating his birthday.  Doubleday’s bad luck also extends to the fact that as part of the Governor’s celebrations 2 companies of Charleston Light Dragoons in dress uniforms are on parade.  Governor Black is one of the regiment's sponsors.

Whilst many residents moved out as the fighting approach earlier in the year, the town’s remaining population is still around 600.  The majority are men of fighting age who form part of the town militia. All movement in the town must be by road. 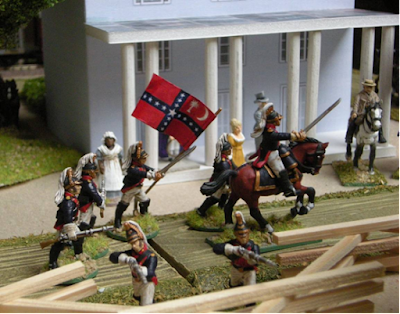