After a foray into the world of 15mm, I have finally come back to my 1866 Minifigs S range project.

On the one any only outing on the wargame table it became apparent that the Austrians and allies outweighed the Prussians and their allies.  The call went out for more troops but some delay in supplies of new figures and a slump in my converting of figures held thing up.

However in the background I have been working away slowly – very slowly.  Here are the latest recruitments. 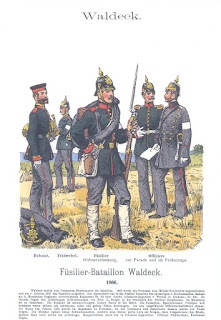 A straight repaint of the Prussian Infantry figures from my spares box. With a green coat and rather fetching white gaiters and armband the Waldeck Infantry cut a smart unit. 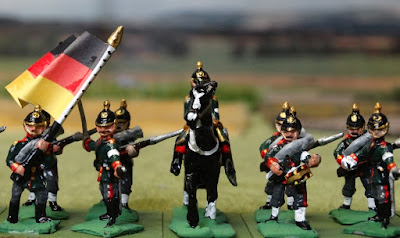 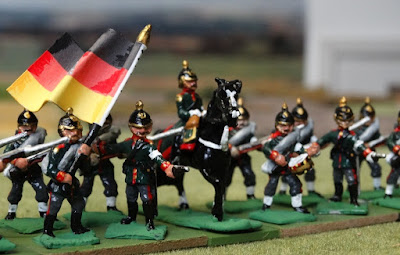 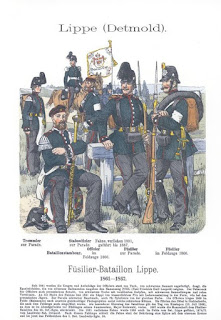 Basically the same as painting the Jagers except they have a brown backpack and a yellow and red cockade.

They are awaiting their flag which is proving to be a bit of a challenge at the moment.  I could just give them a Napoleonic flag but the standard in the background is quite different.

Oldenburg Dragoons
I thought I could just paint up some ACW cavalry as the pictures I had seen looked like the dragoons wore an ACW type kepi. Unfortunately, the S range ACW figure’s kepi is very ‘slouched’ if that’s a word – high at the back and low at the front – and looked wrong.  I therefore filled down the kepi to make it ‘flatter’.  They also have crossed belts and I didn’t realise until I started painting them that I should have removed one of these.  They sort of look okay. 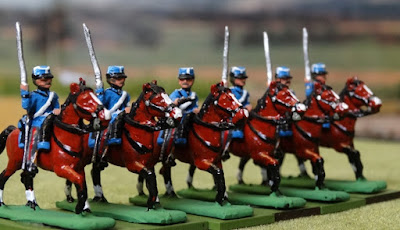 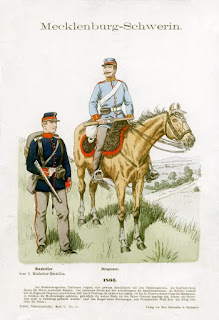 Having not been happy with the kepi and the fact that the ACW figures were sword armed, I decided that these dragoons should be based on the Prussian Dragoon with a Wurttemberg kepi.  Rummaging through my spares box, I found a couple of 2 Prussian Dragoons, an ACW cavalry officer with a pistol, an ACW sword waving figure who became the standard bearer and 2 French dragoons.  Since everyone was going to get a head swap life was a little simpler.  Some quick work with a scalpel sorted out cross belts and epaulettes to give me 6 figures that looked reasonably similar.  I use a light blue as in the illustration above which looks grey in these photos – although I did notice that in Uniformology they used the same blue as the Oldenburg figure. 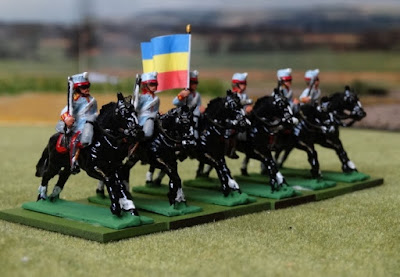 So the Prussians now have some more allied cavalry but still need more infantry!

Next up the Mecklenburg-Schwerin Infantry shown in the picture above.   I am going to use ACW23 as the basic figure without any head swap (same figure as I used for the Hungarian Infantryman).  No packback on this figure so changing it is more simple.


He could just be painted as he is minus the back pack, but I will give him the Jacklex 20mm WW1 backpack as that is a rolled blanket similar to the one on the picture which I will just superglue in position after painting.