Race to the River - a Black Powder Pike and Shotte game

After trying Black Powder with my ACW armies we decided to try Pike & Shotte with Bob's TYW figures.  Jack Bob and I met at Bob's to play the game in his 'war room'.

Bob's figures are based for another set of 18th century rules and he used 4 figures on a 50mm x 50mm base with 3 bases making an infantry regiment. Cavalry are on the same 50mm square bases, with 2 figures on a base. Three bases make a cavalry regiment. Guns are mounted individually.

Both sides had approximately the same force:


All the Austrians were regular – the Turks varied from Elite to Levy
All the stats were taken from Pike & Shotte with the Austrians using the 1690 British values. Although we’ve seen house rules and amendments we used the rules straight from the book.

Jack who was to command the Austrians, met Don Featherstone back in the ‘60s and he was pleased and intrigued to see a wargames device from that period. Don and others advocated a sheet should be placed down the middle of the table so that both sides could deploy in secret. Bob had placed a screen which went from across the table and completely hid his Turks from our view. Something we haven’t done or seen on decades.

'Is that me?'  asked Jack scrutinising the 28mm Austrian C in C command group. 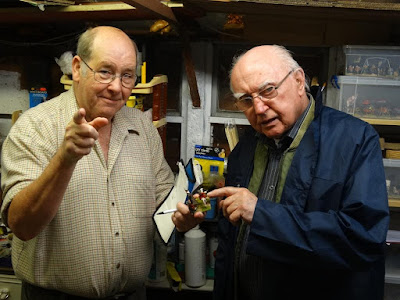 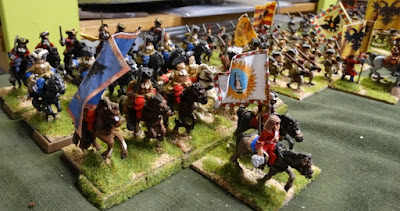 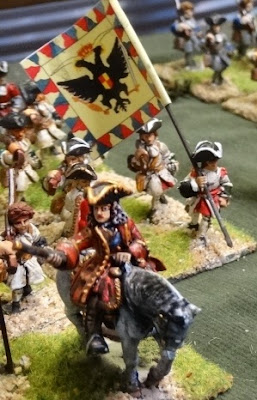 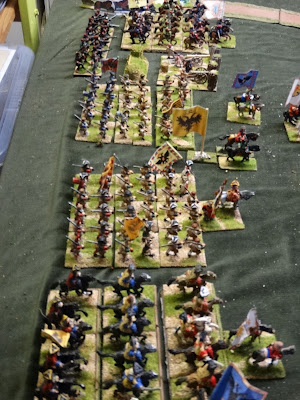 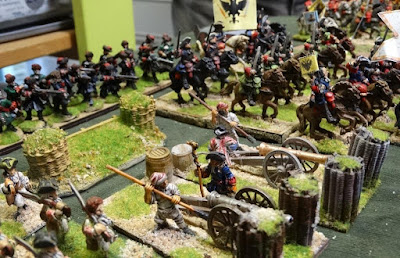 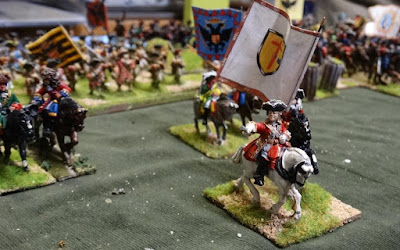 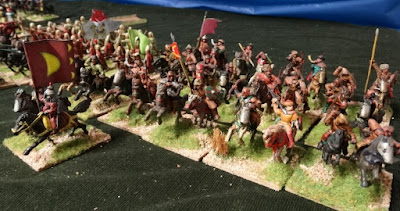 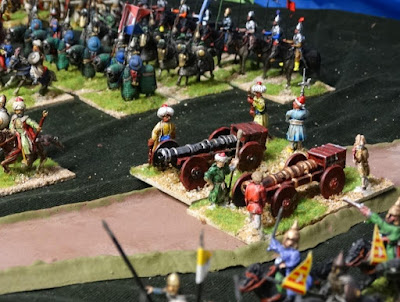 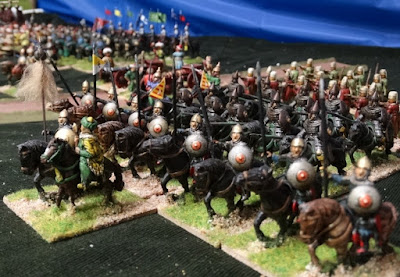 Turkish Spahis of the Porte led by the Sultan's Guard - the Muteferrikas regt - elite heavy cavalry. 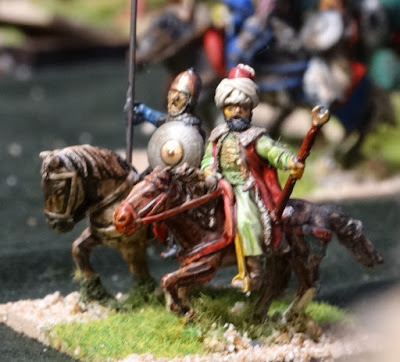 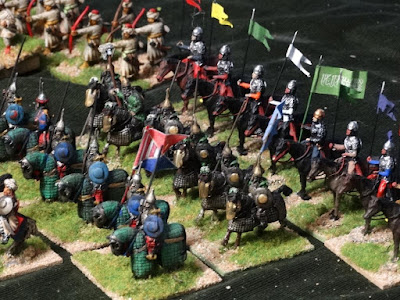 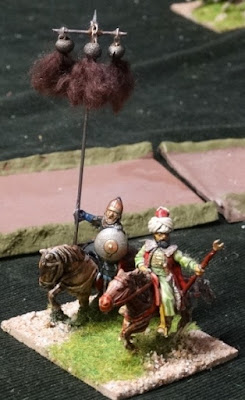 Bob won the initiative and as the Grand Vizier/commander failed to inspire any of his troops (poor dice)  except the Muteferrikas regt Spahis of the Porte led by a Bey with his one horse tail Tug to advance.  They alone made a dramatic move to find themselves occupying the fordable river. 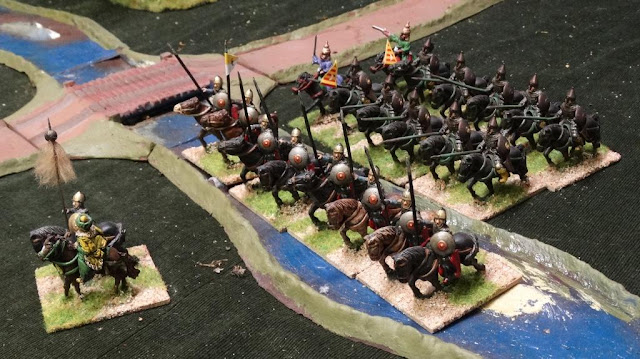 Having watched Bob fail to move his troops forward, Jack obviously took a similar view and with miserable dice throws saw most of the Austrians fail to move.  Only the Austrian horse and an infantry brigade on the right advanced. 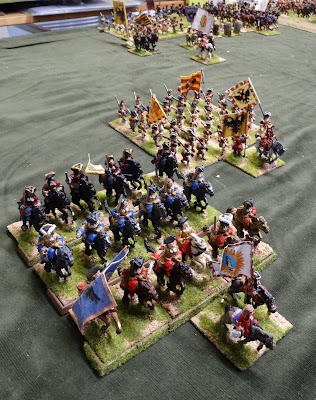 Greater disaster befell the Austrians with Jack ordering his dragons to advance and then rolling a double 6 resulting in a 'Blunder Test' followed by a roll of 2 causing them to retreat 1 move away from the enemy. This took them off the table and out of the game!  'What happened there?' was Jack's response! 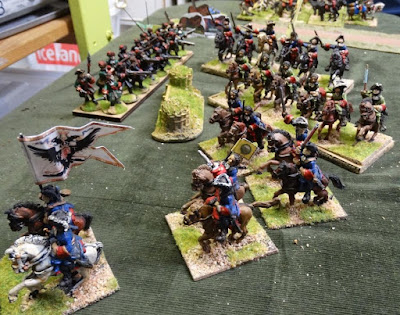 The next turn found Bob still failing to inspire most of his men to advance, with only the irregular infantry advancing a double move and a single creep forward by the  Janissaries.  Jack's second infantry brigade woke up and advanced and his cavalry brigade reached the river. 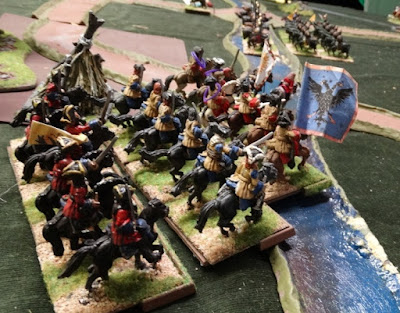 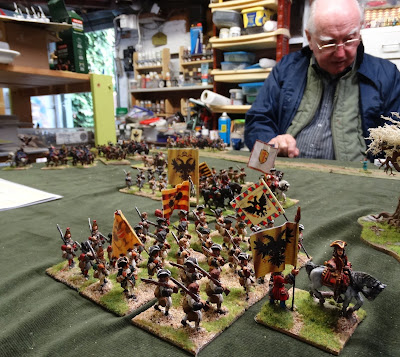 Not to be out done, Bob rolled a double 6 with the result that the elite Spahis of the Porte fell back a move. 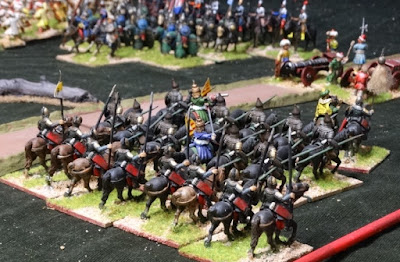 Finally some action, a heroic charge by the Austrian cavalry brigade on the left saw them surge into the Turkish levy.  At last the Austrian gunners having pushed their guns forward to get into range had targets! Disaster as Jack rolls yet another double six Blunder Test and one of the infantry brigades moved left right in front of the their own guns, accompanied by yet another 'What happened there?' and a lot of shaking of heads and more pointing to the play sheet. 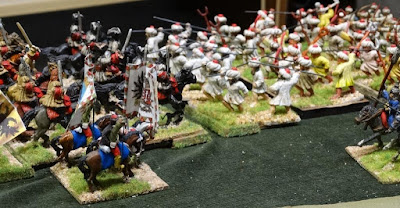 Bob rallied the Spahis of the Porte and they advanced supported by the Janissaries. 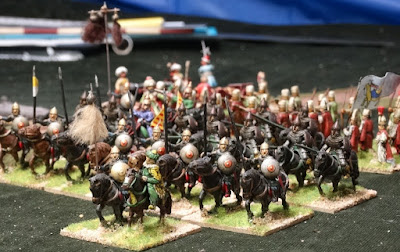 The irregular light cavalry who had been skirmishing on the Turkish right had been forced back.

The Austrian infantry moved through the wood to the banks of the river. 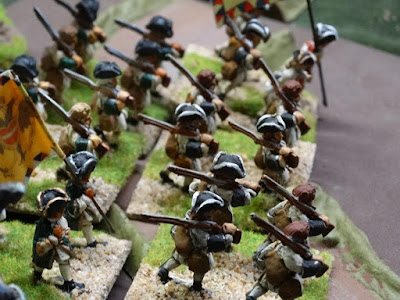 The Saphis of the Porte launched a charge but fell short. Giving the Austrian infantry a chance to give a round of fire. 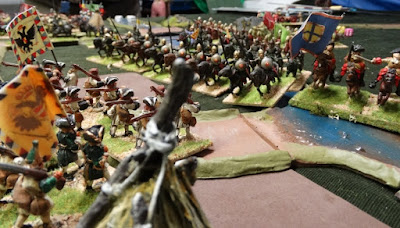 On the left flank the Levy have held the Austrian horse but are shaken. The feudal Saphis support the levy by charging into the Austrians horse.

On the right an Austrian cavalry regiment outflank the Saphis of the Porte and crash into their flank. 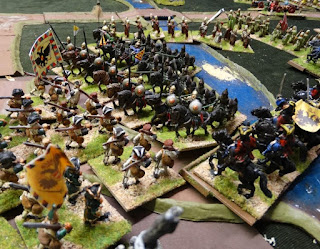 Another regiment of Austrian horse outflank the Janissaries and take advantage of their open flank. Despite bravely fighting on two flanks the Saphis of the Porte morale allows then to hold on. 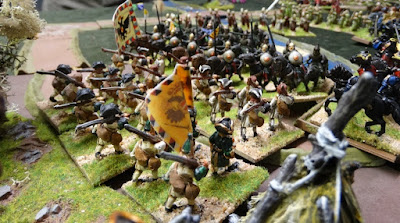 With the irregular infantry and saphis being 'destroyed' by the Austrians, the remaining Janissary regiment and the Turkish guns form a firing line on the flank to form a fighting retreat.

An enjoyable game even if Jack wasn't entirely sure on occasions what was happening. As usual we mis-read bits of the rules on occasions but managed to go back and work it out.

All the Austrians are by Hinchcliffe figures, the Turks are from a range of manufacturers including Hinchcliffe, Essex, Irregular Miniatures and Lancashire Games.

Jack is much more of a colonial/ACW/Mexican revolutionary wars man but enjoyed this foray back in time from his wargaming interests.
Posted by ABC Wargammers at 12:04