Our last game of 2015 involved the man himself - Jack Alexander and his 20mm colonials.

Jack is getting on a bit and rather than make him climb the stairs to the loft, we played the game on my dinning room table.  As you will see this left us vulnerable to attack from 'Kitten Force' my daughters two kittens (well one was a year old on Boxing Day) which I was supposed to be looking after and which I couldn't lock out of the room for too long at a time.

'Kitten Force' were very patriotic and only attacked the native troops.

As in previous games since the natives are out gunned.  I set up a series of hidden ambushes marked with cards, photographed the table and then removed the cards. 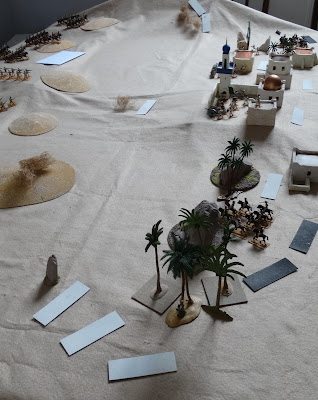 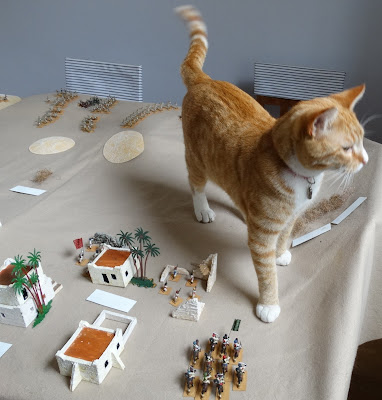 'Kitten Force' attempt to mask British advance and crush one of my ambushes. 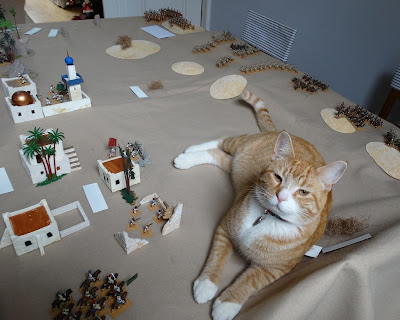 Kitten Force retired and Jack and Bob arrived - a fishy treat prevented 'Kitten Force' from passing on intelligence about my plans.

We used the Sword and the Flame rules with a major change, no wounded.  Jack prefers to see the figures tumble.  The British position, before them is a village being occupied by native troops, the numbers are unclear, but they have a stolen field piece.  Jack commands British and Sudanese camel troops, Sudanese infantry and Highlanders and the artillery. 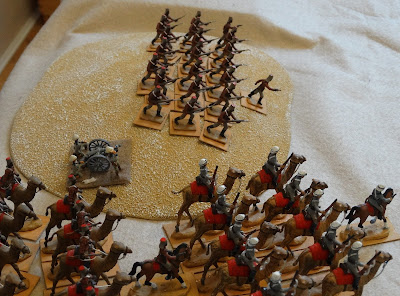 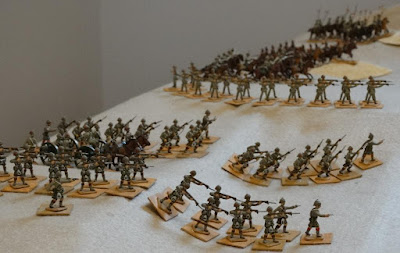 Meanwhile on the left flank Bob commands a cavalry and infantry group. 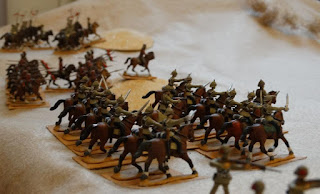 The native village, the British objective 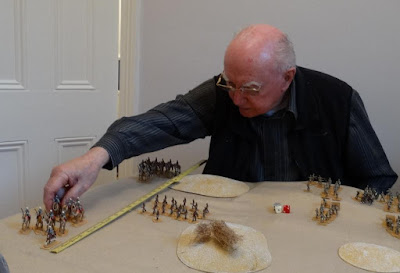 The man himself advances his camels. 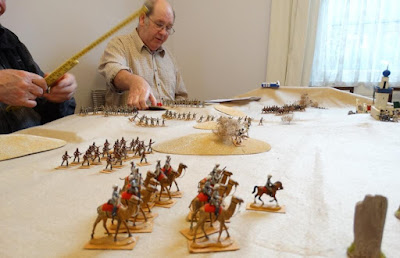 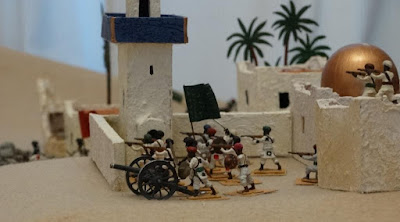 Ambushes are launched as the British and Sudanese come into range 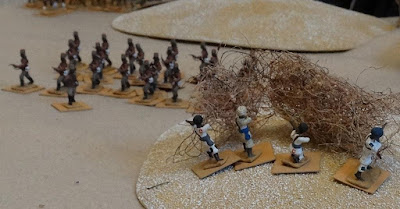 A rifle volley sweeps through the flanks of the British cavalry

The rest of the British and allied cavalry press on 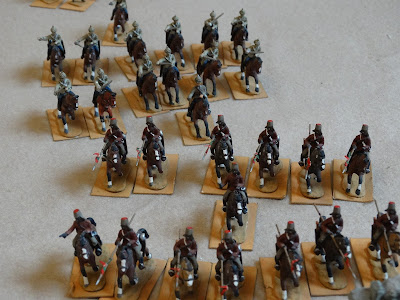 Jack's Highlanders suffer casualties from native artillery made worse by the column formation. 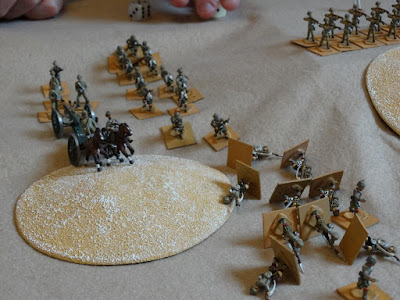 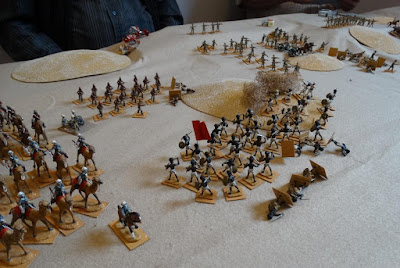 My Hadendoa surge forward and are taken in the flank by Jack's camels. 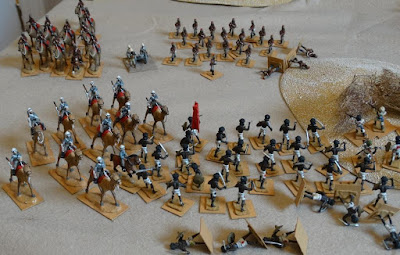 Time for Ted Herbert's Jacklex conversions to take to the field giving the Hadendoa a chance to escape the melee... 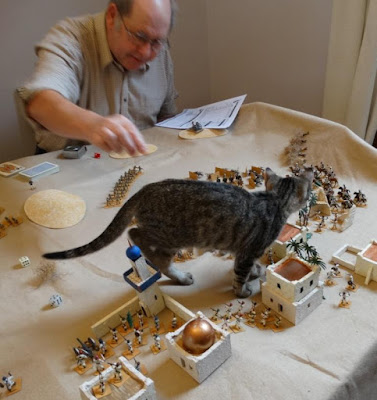 With disaster striking the British lancers I decided to launch my camels and cavalry from their hiding place. 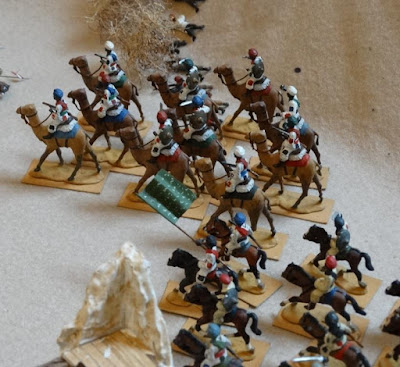 The British not to be out done send in 'Kitten force' to try to seize my flag and disrupt the attack.. 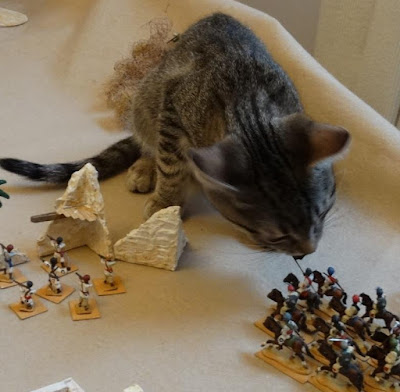 My men fight back and 'Kitten Force' is expelled from the front line! 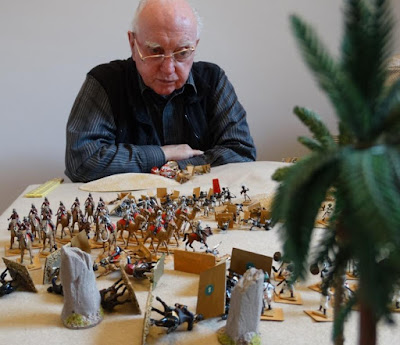 One of the arms of his glasses shot away, the British commander urges his troops forward. The British eventually deploy their artillery and silence the native artillery. 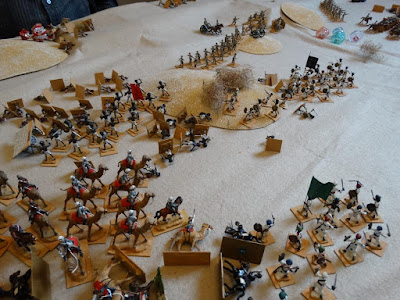 No wounded play results in mass knocking over of troops.  My cavalry fail for the second battle in a row but give the Hadendoa a chance to push on and overwhelm the Sudanese infantry, exposing the British flank. 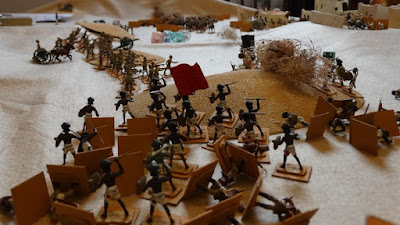 Jack's camels push on and I throw in my spear armed infantry in an attempt to stop them.

The camels cut through but at a price. 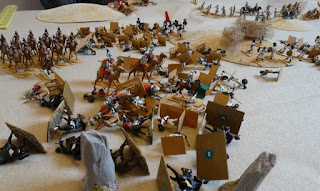 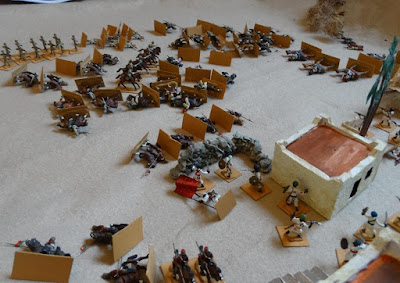 The British are throwing everything into the battle including a final assault by 'Kitten Force' in an attempt to rig the dice roll. 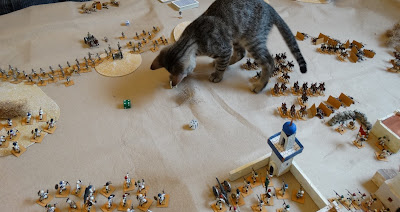 The Sudanese lancers much to my surprise survive a round of rifle fire and reach the village sending my men into retreat. 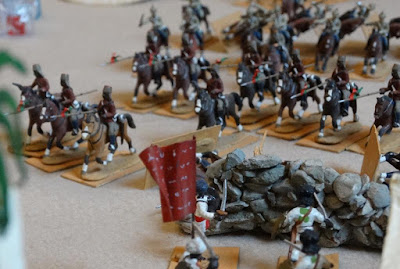 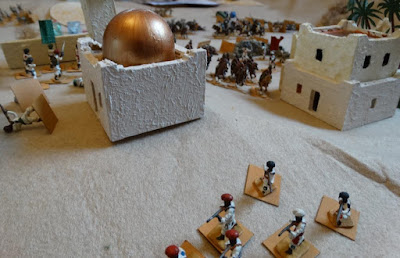 I throw in the last of my infantry and cavalry to stem the rot. 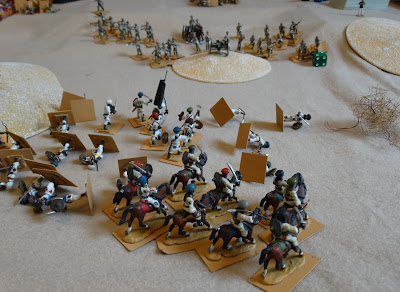 The gamble fails and they turn tail after a volley and artillery fire from the British. 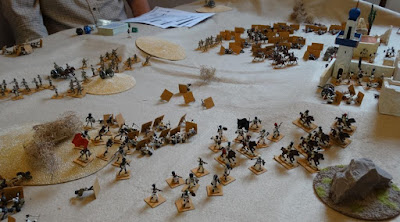 Two companies of Highlanders smartly reversed their flank and a good British volley took out the Hadendoa who had tried to turn their flank. 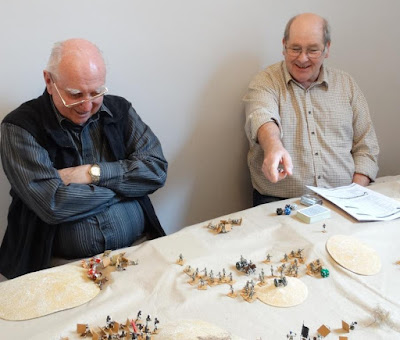 The glee on the British faces as my remaining troops retire.

Conclusion
Despite the interruptions from 'Kitten Force' it was a 'fun' game.  All the figures being on single bases meant knocking over single figure casualties was possible and certainly led to a cluttered battlefield. With a few hundred figures to move individually we didn't actually make that many moves and although Jack doesn't like the idea of movement trays we all agreed that it would have speeded the game up and still allowed the old fashioned 'knocking over' of figures.