Had an interesting game at Bob’s with his Hungarians which I hadn’t seen before.

The scenario involved a Turkish raiding force meets an Hungarian force sent by King Mattias Corvinus.  The Hungarians are led by mounted knights and heavy cavalry, backed by heavy infantry with 2-handed cutting weapons.  There was also a unit of crossbows.  Since the game is set in the late 1450s the Hungarians also had a "brigade" of Hussite mercenaries - 2 units of handgunners and 1 of flailmen - actually flail 'women' as Bob ordered the wrong figures.  Not that it helped the Turks as you will see later.  2 units of Pechenegs served as Cumans for the Hungarians.

The Turks for their part as well as the usual suspects: levy infantry and Janissaries, they also had a unit of Wallachs and another of early Turkish amoured swordsmen.

Bob commanded the Turks who outnumbered the Hungarians. 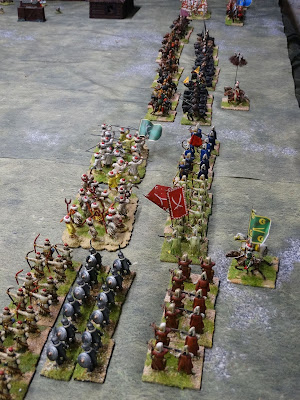 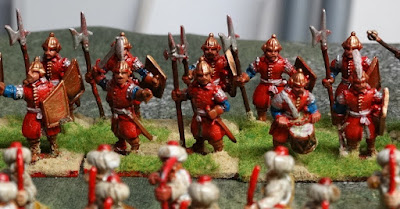 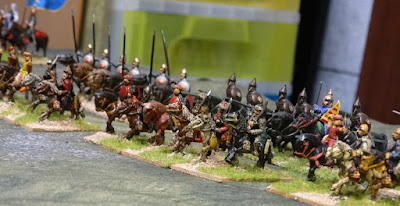 I took control of the Hungarians who although fewer in number, in their Knights were a ‘tank force’. 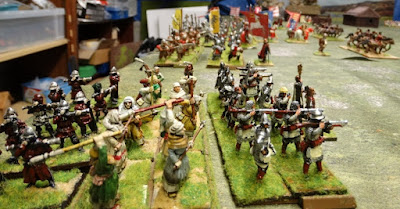 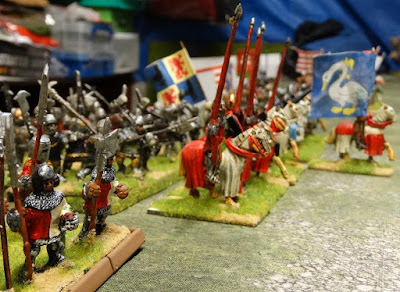 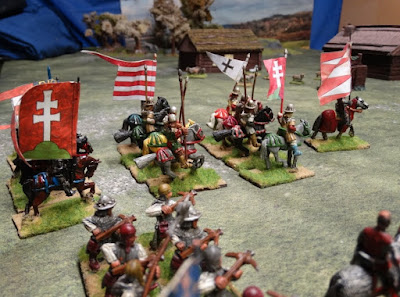 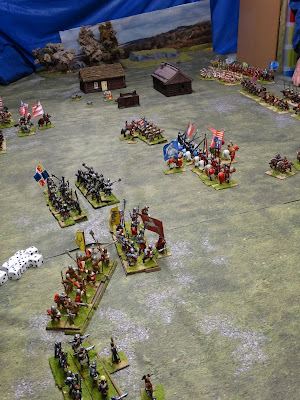 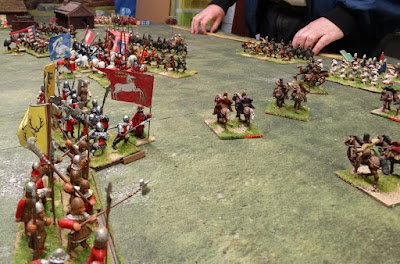 The ‘Cumans’ moved forward and started to move and fire along the front of the Turkish levy causing some disorder.  Basically paralysing Bob’s left wing

The Bob moved his right wing towards the village on the right in an attempt to outflank the Hungarians taking advantage of his numerical superiority. 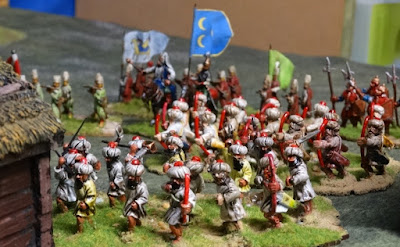 Again the Cumans rode forward to pepper the Ottoman left.  However this time they found themselves facing a large force of archers who hit back disordering one unit of Cumans.  Despite shaking one of the large units of levy infantry it managed to pass its break test. 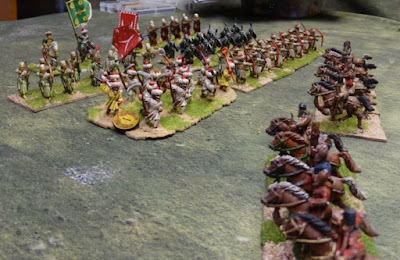 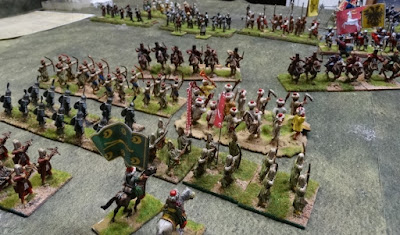 In the centre, Bob launched his heavy cavalry in a charge against the Hungarian knights. 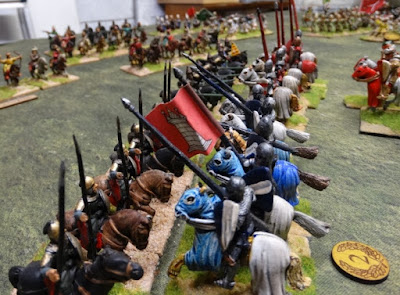 In the ensuing melee one unit of Muslim knights was forced to retire whilst the other held its ground surviving a break test but things looked grim for the next round. 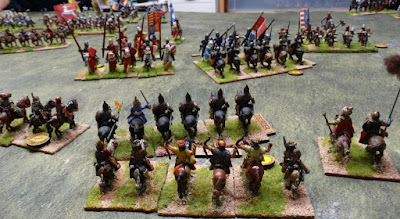 Bob’s horse archers swept across the front of my troops firing as they went ending in the village. 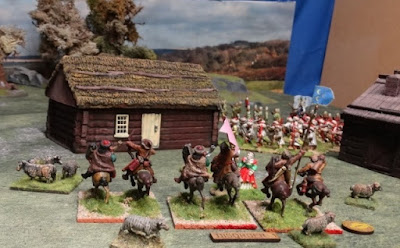 After 2 rounds of doing nothing, my Hobilars got going and blocked the exits to the village on the left.  The archers found themselves trapped and were broken in a one sided melee.  Meanwhile, with all this happening around them a fearless (hapless) knight is getting his ‘do’s and don’ts’ campaign orders from his wife. 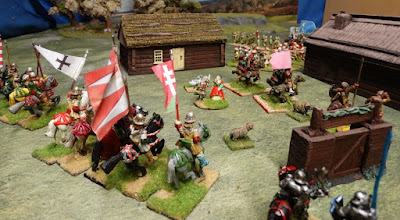 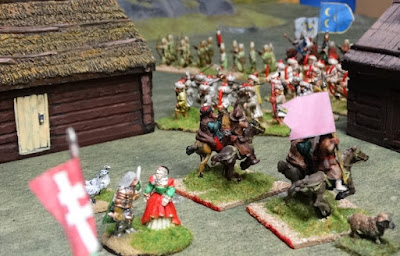 Things were going well for me with my heavy infantry with their two handed cutting weapons following up on the Hungarian knights.  That was until they got a blunter test.  Fortunately, it only resulted in a move to the left but still left Bob pleased with my inconvenience. 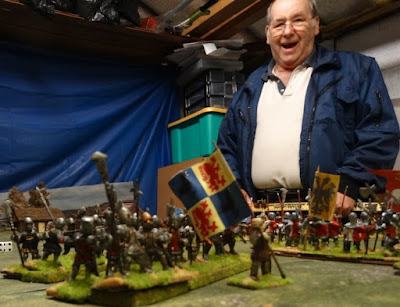 All the while my unit of crossbowmen had been doing excellent work supporting the Knights and hitting the supporting Turkish cavalry units. 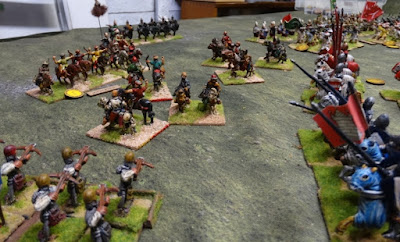 Amazingly the Turkish levy infantry continued to pass break test after break test.  Whilst seemingly a good result this infantry which was supposed to absorb some hits and run stood preventing the best Turkish infantry getting into the game.  Eventually it was one test too many and the levy broke and the large body of archers were forced to retire. The Janissaries were finally free to advance. 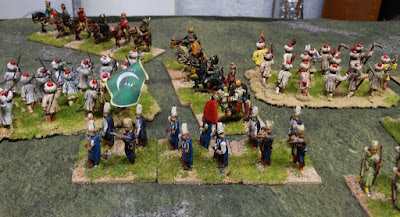 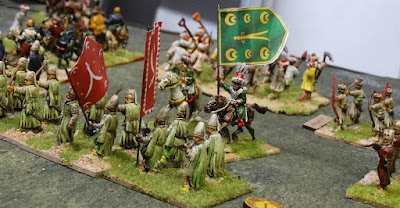 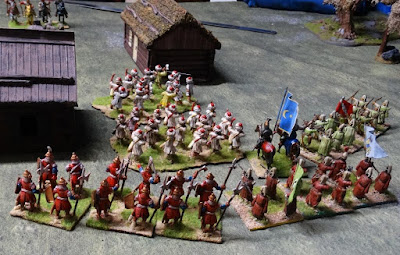 The Hobilars saw off the first of Bob’s levy units and still the list of ‘do’s and don'ts’ was being given out. 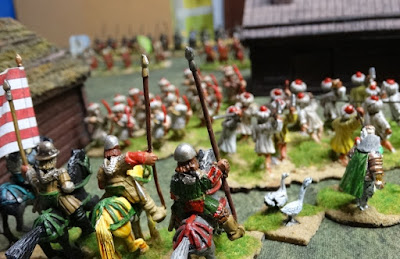 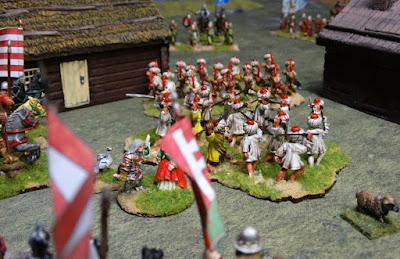 On the right my infantry had been moving taking advantage of Bob's inability to deploy his troops because of the levy infantry blocking them for so many moves.  My hand gunners and Flailmen (women) flanking them.  Finally the failwomen launched a charge taking on some Hungarian mercenaries and roundly beating and breaking them.

The final unit of Turkish heavy cavalry was thrown in in a vain attempt to swing the game.  They failed and bounced off the Hungarian knights, but enough damage was down to force one of the units of knights to retire. 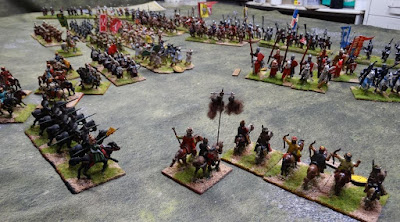 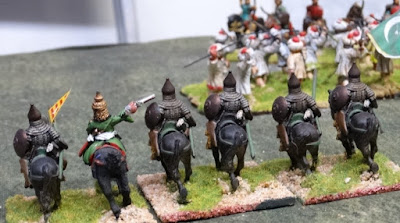 One of my units of heavy infantry with two handed cutting weapons took on one of Bob’s Janissary units whilst it held was the final writing on the wall. 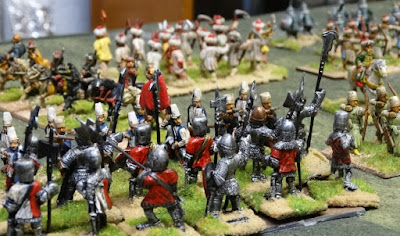 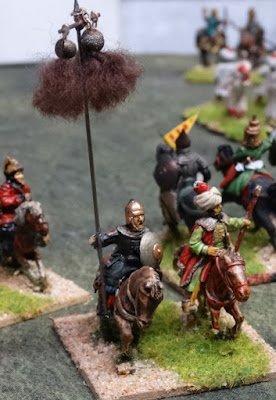 It was a good game, the Hungarian Knights were just too powerful for the opposing Turkish Heavy cavalry and with a stamina of 6 they just kept on going.  There were some lovely looking units on both sides which I hadn’t seen before.  The Wallachs, although they never got into the game, looked superb in their resplendent red uniforms.  More learning of the rules as we went along and a realisation after the event that we got things wrong, but not enough to spoil an enjoyable time.

The bulk of the figures are Lancashire Games 100 year War French, with a few Old Glory knights. The Hussites and Pechenegs are from Kingmaker with a unit of Irregular Miniature handgunners.

The large blocks of Turks are Lancashire Games, the rest are an assortment of makes including Essex, Kingmaker and Irregular miniatures.  The unit of Wallachs are from Warlord Miniatures.